This year’s event to take on sports theme 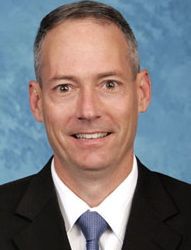 Good afternoon, sports fans! The theme of the 10th annual Pops at the Post is, well, sports.
Maestro David Hagy’s sport is music, but during Pops at the Post, it will also be skiing.
Hagy will perform Leonard Bernstein’s Overture to “Candide” on skis. If you’ve never seen it before, you’re in for a real treat.
“People have been clamoring for me to do it again,” says Hagy, who last performed the strenuous piece several years ago. “I’m doing it and retiring it.”
Hagy really gets a workout during this piece — and in fact is working out to prepare for it.
“I’m doing 100 sit-ups every day,” Hagy reports. “We usually start with a classical work, and this is a big challenge for the orchestra. They have to do it without me, because I’m basically doing a lot of other stuff. It’s a tough piece, but they’ll do a good job.”
Thankfully, the rest of the concert — while sports-related — is less taxing on the maestro.
Hagy continues to be amazed at the popularity of Pops at the Post.
“It is remarkable how popular it is,” he says. “By the second or third year, it was already evolving much more into a community event.”
After the “Star-Spangled Banner” and “Candide,” the Salisbury Symphony will pack in as much sports-related music as possible, Hagy says. You’ll hear “Take Me Out to the Ball Game,” and Kent Bernhardt will narrate “Casey at the Bat” in nods to baseball. Track events will be recognized with “Chariots of Fire,” football with the theme from “Rudy,” boxing with “Gonna Fly Now” from “Rocky” and basketball with the “Hoosiers” theme.
Hagy notes that there’s a lot of sports-related music out there, but the challenge comes in finding appropriate orchestral arrangements. He’s certainly posted a high score for the first part of the concert.
The second half will feature sportscasters performing “Beethoven’s Fifth” by Peter Schickele of P.D.Q. Bach fame. P.D.Q. Bach is known as the 21st son of Bach’s 21 odd children — “and certainly the oddest.”
Silliness and zaniness are sure to abound.
“There will be a groin injury in the orchestra, and someone is sent to the penalty box,” Hagy says. “Oh, it’s a hoot!”
When Linda Jones, the symphony’s executive director, discovered the National Sportscasters and Sportswriters Association meeting was the same weekend as Pops, she wondered if the two groups might work together.
“That’s when David came up with the idea of the P.D.Q. Bach piece, and enlisted the help of some sportscasters to do the play-by-play,” she says. “It just beautifully melded together.”
Rounding out the second half of the concert are the pieces played each year, “The 1812 Overture,” by Tchaikovsky and “The Salisbury Post March” and “The Stars and Stripes Forever,” both by John Philip Sousa, as well as “America the Beautiful” by Carmen Dragon.
Hagy promises sports-related encores.
The Pops committee, Jones says, is always eager to know the theme each year.
“He always wants to get a feel as to what’s on people’s minds,” Jones says of Hagy’s theme selections. “For many people, this is their only exposure to a classical music concert.”
But because it’s a pops concert, Jones says, it’s always accessible.
Perhaps this year more so than ever.