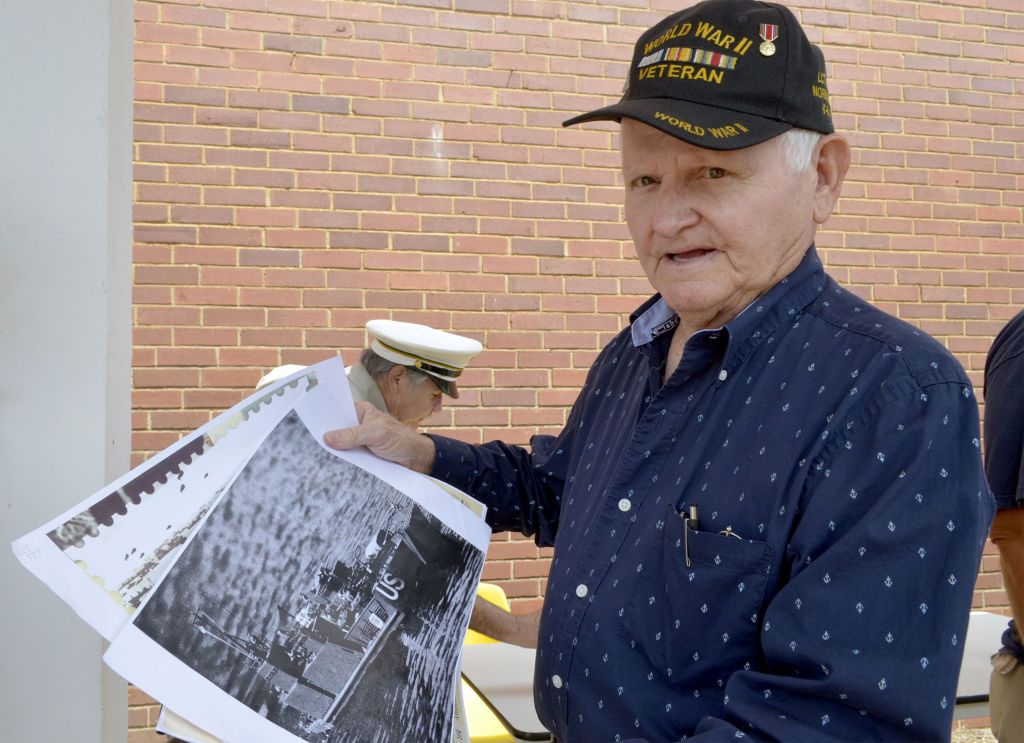 CHINA GROVE — On June 6, 1944 — 70 years ago this week — the Allies invaded Nazi-held Normandy and began the long push to defeat Hitler at last.
Saturday, some of the tools that U.S. soldiers, sailors, aviators and Marines fought with on the beaches of France were on display at the Price of Freedom Museum.
And a special remembrance of D-Day was held to commemorate the costly Allied landing that established a foothold in Europe and ultimately brought World War II to an end.
Bobby Mault, who manages the museum, said the event has been held for the past three years, and “usually brings 700 to 800 people.”
Special events are also held at the museum to commemorate the Sept. 11 terror attacks, as well as on Veterans Day.
Now 80, Mault said he remembers the war very well. His four older brothers served overseas.
“I was an 8-year-old boy when war was declared,” Mault said. At age 11, he listened to reports of the D-Day invasion.
Mault said the museum, and the events held there, are “to honor those for fought for our freedom, and to preserve history.”
John Troutman, of Salisbury, saw that history firsthand.
“I was aboard LCT 587, in flotilla 12,” said Troutman.
Standing outside in the shade, he pointed out a picture of a similar landing craft — one of those that ferried U.S. tanks and equipment to shore on the morning of the invasion.
“We had four Sherman tanks, equipped to float,” Troutman said. “We were supposed to make that one landing to deliver those four tanks.”
The boat was never intended to come back, Troutman said. That landing was everything.
Pausing to find words, Troutman recalled how the landing didn’t go as planned. In many cases, he said, “the guys didn’t even get off the boats.”
Today, Troutman said, “It’s just wonderful to be alive.”
Inside the museum, guests looked at uniforms and memorabilia from the different branches of service.
On the lawn behind the museum buildings, a display of restored and preserved military vehicles and equipment drew many more to learn about how servicemen fought the war.
Replica grenades and bombs were on display, alongside simulated and real firearms from World War II and other eras of U.S. military history.
Brooks Hubbard and his brothers took turns with a simulated .30 caliber machine gun, part of local collector Sonny Karriker’s collection of Korean War gear and memorabilia.
Their grandfather, Reid Benfield of Salisbury, said there was more to it than just fun.
“I wanted them to know what this was all about, freedom, because they’re not taught a lot of this stuff in school anymore,” Benfield said.
His grandson Cam Hubbard, 15, a student at Northwest Cabarrus High School, said they did discuss some World War II history during the past year.
“They had so much courage to do what they did for our country,” Cam Hubbard said.
From jeeps to transport trucks, and even a 1941 gas-generator-powered anti-aircraft searchlight, the displays gave visitors a view of what the warriors of World War II, and other conflicts, would have used to fight.
As part of the D-Day remembrance, a special ceremony was held at 10 a.m. Saturday, with music and a flag-raising ceremony.
The museum remained open throughout the day.
At a tent with displays of equipment and information on Desert Storm, Lee and Pam Norris and their son Brody talked about how soldiers fight.
The event was especially significant to Lee Norris. “A lot of my relatives, and my great-uncles and my grandpa, were all World War II vets,” Norris said.
He said his grandfather on his father’s side fought in the Philippines with the field artillery.
They didn’t always talk about their experiences, Lee Norris said, but the memories they did share are important.
“Once all the World War II vets are gone, the stories that they could tell will be gone,” Norris said.
Tim Morton talked of serving in Desert Storm and Operation Iraqi Freedom, wars that have their own stories for new generations of servicemembers.
Morton, too, said he had family members who fought in World War II. He said he was proud to hear their memories of those years.
Wade L. Edwards, who commanded one of the “ghost ships of Normandy” in preparation for the invasion, was among the veterans at Saturday’s D-Day remembrance.
He praised Mault for the organization of the event, and for working hard for so long to create a place to honor American veterans of all wars.
“All these years, he’s sacrificed and done all he could to spread the word of the price of freedom,” Edwards said. “He’s a great American.”
But Edwards, and the other veterans who fought on the beaches of Normandy 70 years ago, were particularly praised Saturday for their bravery on the other side of the Atlantic, fighting to bring the world’s largest war to a close.
Contact Hugh Fisher via the editor’s desk at 704-797-4244.