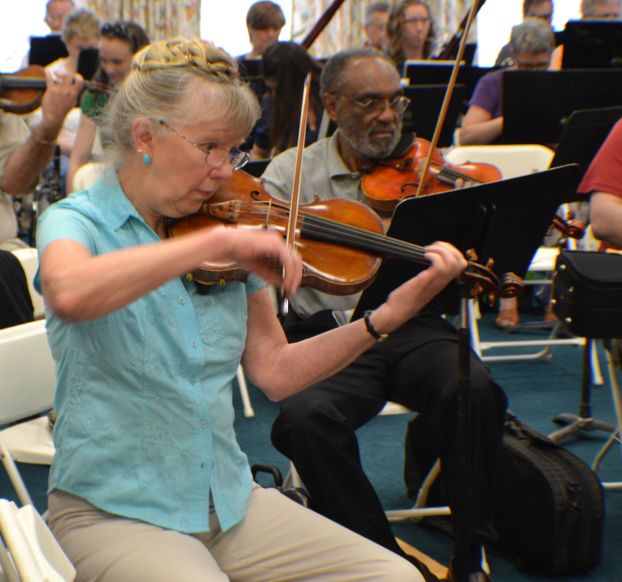 If you’re a symphony conductor and your mom can’t come to the concert, well, you simply bring the concert to her.
That’s exactly what Maestro David Hagy did in the summer of 2011.
“I just realized my mother couldn’t get out, and she’d never see me conduct again, so I brought the symphony to her,” Hagy says.
The symphony held its dress rehearsal for Pops at the Post at the Lutheran Home. Hagy’s mother died a month later. In the two years since, the Mary B. Hagy Dress Rehearsal has taken place at the retirement community, and will happen again this year, on the afternoon before the evening concert in downtown Salisbury.
Hagy has been pleased with the results.
“It turned something very personal into something very positive for a lot of people,” he says, especially for the Lutheran Home residents, and residents of Trinity Oaks who don’t take the bus to downtown Salisbury for the Pops concert.
“You can hear it all over the building!” says Maggi Blizzard, Trinity Oaks’ director of resident services.
Because the orchestra takes up nearly every available inch in the chapel and activity room, residents line the halls to hear their very own Pops concert.
“The residents absolutely love it,” Blizzard says. “It’s such a blessing for them. How many nursing homes have you heard of who have a symphony orchestra in their activity room?”
“It’s wonderful to walk in there and hear that music going on,” says Linda Safrit, whose brother, Leon Williams, is a Lutheran Home resident. Williams, known as the Mayor, can be found front and center, because he loves music.
“I prefer to go there rather than downtown on Saturday night,” Safrit says. “I see people I know, and I tap my foot to the music.”
Whether downtown or at the Lutheran Home, there’s a real sense of community surrounding the event, Safrit says. “You see residents with smiles on their faces, and some don’t ever smile, so it’s good to see that.”

Question: How long is the concert? Answer: Pops at the Post is typically a two-hour concert, with a 15-minute intermission.... read more