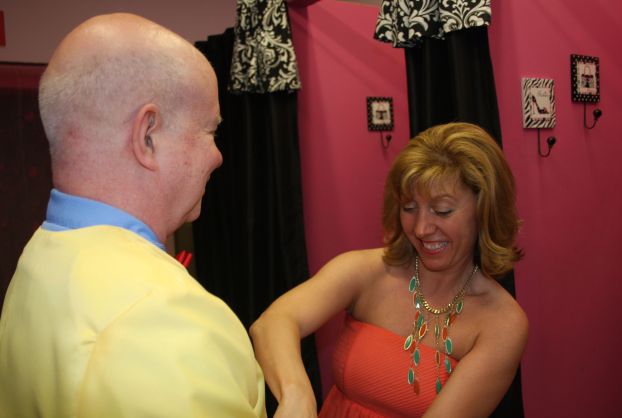 Just like the logo: Maestro Hagy gets yellow tux

One thing’s for sure: There’s absolutely NO WAY you can miss Maestro David Hagy when he raises the baton for this year’s Pops at the Post.
Just like the conductor on the concert’s logo, Hagy will be clad in a bright yellow tuxedo jacket.
And when we say yellow, we REALLY mean yellow.
“Oh! It made my eyes sore, working for two days with yellow,” says Maia Smith, owner of Maia’s Fashions. She designed and made the jacket especially for Hagy.
Audrey Eudy, president of the Pops at the Post board, came up with the idea for the special 10th anniversary celebration.
“Our logo really pops and stands out,” Eudy says. “We were looking for something to make this year stand out. David loved the idea. I had no doubt Maia could pull it off.”
“I told Audrey, ‘And you know I can make anything!’ ” Smith says with a smile. “He came and I took measurements. I’ve never made a conductors’ jacket before.”
That didn’t stop her.
One recent afternoon, Hagy comes to her shop at 103 S. Main St. for his final fitting.
“Oh! You look so good!” Smith says, making sure the jacket fits just right. It does.
The design came from the event’s logo, which was created nearly a decade ago.
Win Minter, who was the Post’s creative services director at the time, says he had no idea what Hagy looked like. He pulled the conductor from a piece of clip art — ready-made illustrations that newspapers can use in their advertisements and such.
“It was just a coincidence that it looked like him,” says Minter, who now lives in Charlotte. “Then I added some patriotic elements to the piece, and it all seemed to work. When I did it, I thought, you know, this really works. I had a good feeling about it. It’s funny how coincidences work. I recognized how appropriate that image was. When something’s right, it’s right.”
His fitting complete, Hagy leaves and makes his way back to his home at the Plaza, the jacket waving jauntily behind him in the wind, flying like an insanely bright flag.
Smith spots him from nearly a block away as she goes out to walk her dog.
“Look!” she says. “You can see him from here.”
Indeed you can.

Prayers for a bountiful harvest at Sacred Heart

There was a time when the rhythm of life turned with the cycle of the seasons, from seed-time to harvest.... read more