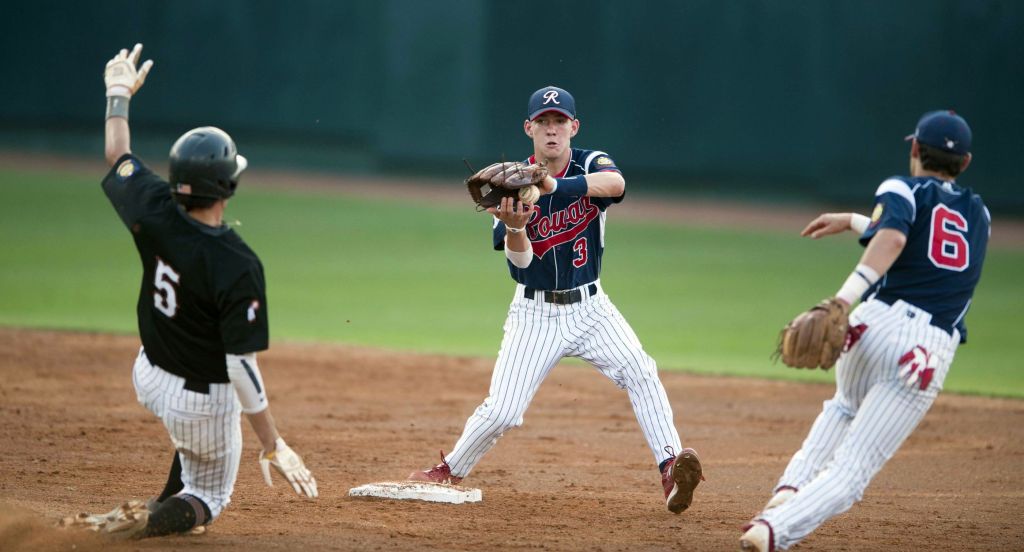 SALISBURY — Davidson County only had one serious chance to make it a ballgame on Saturday, and Rowan County pitcher Chase Jarrett took care of it.
Rowan rolled 10-3, but it was only 3-0 in the top of the third when Davidson (8-4) filled the bases against Jarrett with one out on an error, a double by Nick Williams and a hit batsman.
The next hitter was cleanup man Christian Dix, and it probably was a blessing that Jarrett was unaware Dix had gone 6-for-6 just 24 hours earlier. It might have made him a little more nervous.
“Cleanup hitter, so I knew he could tie up the game with one swing,” Jarrett said. “But it’s like the coaches always remind us, I also was just one pitch away from getting out of that inning.”
Jarrett made the pitch he wanted and needed, and Dix rapped a groundball to second baseman Michael Caldwell. Caldwell scooped the ball cleanly and redirected it to shortstop Jeremy Simpson almost in one motion. Simpson fired, first baseman Chance Bowden stretched, and Rowan had an inning-killing double play that changed the game.
“Caldwell really stayed down on that ball well and gave Simpson a good feed,” Rowan coach Jim Gantt said. “Pretty double play.”
A hit there and it’s a different game, but that timely DP put Rowan (5-1) on the road to a cruise-control win and its fifth straight victory. Rowan hasn’t lost since it’s been at full strength.
Jarrett (2-0) pitched five shutout innings before exiting, and Rowan led 9-0 at Newman Park before Davidson County got some runs late.
“We’re hitting like crazy right now,” said Jarrett, who went 5-2 at East Rowan and made the All-South Piedmont Conference team. “That makes for easy throwing for the pitchers. There hasn’t been as much pressure on us as there was in our high school games. Early runs do a lot to ease your mind.”
No one had expected an easy game with Davidson, which is talented and has beaten perennial Northern Division bullies Kernersville and Randolph County.
“A lot of things just worked out for us,” said Gantt, who has been saying that a lot lately. “Guys who were running on their own ran at some good times and we stayed out of some double plays that would’ve changed some things.”
Rowan got three runs in the first against West Davidson High hurler Chandler Simmerson, who was the Central Carolina Conference Player of the Year.
Caldwell, who went 0-for-4 Thursday, got things started in the first with a bunt single.
“I just wasn’t picking the ball up well Thursday, and Coach told me that maybe I should just try to get a bunt down,” Caldwell said.
That bunt fell — barely — between the pitcher and third baseman, and when a pickoff throw got away, Caldwell hustled all the way to third base.
Chance Bowden’s bouncer scored Caldwell, and Bowden reached on an error on the play.
After Riley Myers walked, Luke Setzer’s line single made it 2-0. Then Ryan Jones’ groundout made it 3-0.
After that big DP got Jarrett through the third, Rowan added two runs for a 5-0 cushion in the bottom half of the inning. Caldwell and Bowden started the inning with singles, and Myers moved both runners up a base with a right-side groundout.
“You could tell Myers was going backside there, and when you do the right thing, it usually works out for you,” Gantt said. “I thought we had a good team approach tonight. We battled with two strikes. We had some great at-bats.”
With first base open, Setzer wasn’t going to get a fastball to hit from Simmerson, but he drilled a curveball for the two-run single that made it 5-0.
“We’re just having fun and getting it done,” Setzer said. “It’s just very enjoyable having so many guys hitting the ball so well.”
Rowan had only nine hits, but they came in bunches. No. 2 hitter Caldwell, No. 3 hitter Bowden and No. 5 hitter Setzer had terrific games.
Caldwell had four hits and scored four runs. Setzer, who will be joining Catawba’s program, drove in three for the second straight game. Bowden, a Catawba signee who put on a baserunning clinic — three times he moved up on balls in the dirt that didn’t get away far — scored three times and knocked in two.
“Moving up on those balls in the dirt, that’s something we work on all the time,” Bowden said. “It made a difference for us tonight.”
Heath Mitchem, Cory Fries, Blake Cauble and Travis Holshouser followed Jarrett to the mound.
Williams, who has signed with Catawba, had a two-run single for Davidson in the ninth, but that only made the score more respectable. After the third inning, there wasn’t much doubt about this one.
“We’ve got a great-hitting team,” Caldwell summed up. “And when we go out there, we expect to win.”
Rowan plays Davidson again tonight, but this time it will be at Holt-Moffitt Field in Lexington, where this summer’s state tournament will be held.