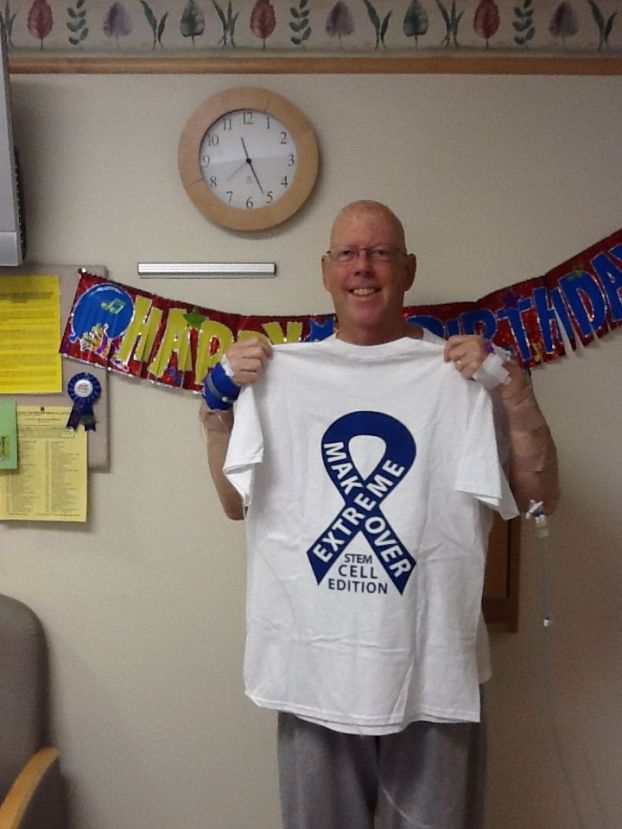 When David got his childhood immunizations, he did not cry. He was good. They gave him a sticker.
He is kind and soft-spoken, with a gentle smile and a twinkle in his eyes. He’s tall for his age. He is kind and compassionate, and likes to laugh. He’s even-tempered, calm and confident, and he’s an excellent listener.
This weekend, he and his family are gathering at their Salisbury home with several dozen friends, and they are celebrating. There’s lots of food and fun, and, most likely, balloons.
Dr. David Hall is 66 years old. But on May 29, he’ll be one year post-transplant. It’s his Re-Birthday.
Over 33 years of clamping 5,000 umbilical cords, he never dreamed that a cord blood transplant would save his life.

g g g
For the past couple of years, David had been walking six to eight miles a day. In the summer of 2012, he found himself with a bit less stamina. He didn’t think much about it until his wife, Charlotte, retired, and joined him on his walks.
“She had never done much walking for exercise,” David says, “and she was walking me into the ground.”
That November, David visited Dr. Chris Agner, who found that he had severe anemia and a very small white cell count. A bone marrow test the next day confirmed a diagnosis of acute myeloid leukemia — an aggressive cancer.
The Halls visited Wake Forest Baptist Medical Center on the Monday before Thanksgiving. Because it was a holiday week, they were granted a short reprieve, and told to report to the hospital the next Monday.
Thanksgiving 2012, David says, “was focused. It was quieter. We really felt the closeness and appreciation for family.”
The Halls have two sons, Brian, 37, and Jason, 34. Jason and his wife, Felipa Acevedo, have a son, Jason Miguel, now 4 — clearly the love of his grandparents’ lives.
“We had no idea what we were facing,” Charlotte says. “We knew it was not good, but we knew Dad was a strong man, and we knew we were gonna fight it. And everybody was on board with it.”
After Thanksgiving, David entered Baptist Medical Center for seven weeks, undergoing two rounds of chemotherapy, followed by five months of additional therapy. The physician matter-of-factly ticks off his list of side effects: no energy, long hours sleeping, minimum appetite, some nausea.
They were surprised at the intensity of the treatment. On May 17, 2013, it got even more intense.

g g g
David entered Duke University Medical Center to prepare for a cord blood transplant. A search of the national and international bone marrow database found no adult match for him. He underwent a regimen of chemotherapy and radiation, designed to destroy his bone marrow. It would not come back on its own.
“It poisoned my body big-time,” he says.
At his diagnosis, David had a white cell count of 1,000. (Normal counts range from 5,000 to 10,000.) After this treatment, it was less than 100.

g g g
David and Charlotte are pragmatic, straightforward thinkers. They knew what they had to do. A retired OB-GYN, David could “speak the language,” but he didn’t feel he had much advantage over other cancer patients. “I do think I felt more of a trust for my doctors. What they were saying made sense.”
“He was better equipped to describe what he was going through,” Charlotte adds.
“I felt very confident with what they were telling me,” David says. “I saw no advantage to getting on a plane and traveling 3,000 miles away for treatment.”
“You had confidence,” Charlotte echoes.
“Even if it didn’t work,” David says, “I was satisfied with my life.”
g g g
In transplant parlance, May 29, 2013, was Day Zero. Each day before transplant is a negative number. The following days are positive numbers.
That morning, Charlotte realized David wasn’t responding to her. She touched his neck, which was “on fire.” David was nearly comatose because of septic shock — a widespread infection in his body.
But the cord blood cells had already been thawed. There was no turning back.
Massive doses of antibiotics and steroids helped him recover. He received one bag of cord blood, then another. By the second bag, he was sitting up in bed, laughing.
A Re-Birthday.

g g g
A friend sent David a wooden, hand-held cross — often called a Clinging Cross – and he kept it with him during the rest of his treatment. He calls them clutch crosses, and he’s now making them for others.
Charlotte brings out a basket filled with get-well cards and blue “thinking of you” cards from fellow parishioners at First Presbyterian Church.
“You hear people say, ‘I’m praying for you,’” she says, “but until you’ve got people praying for you, you don’t understand what that means. It’s very uplifting. There are times you feel weak on your own — then you feel that warmth (of prayer) and you know it makes a difference.”
g g g
Six months after David’s transplant, the couple would need even more prayers. Charlotte’s nephew, 23-year-old Blake, died the day after Thanksgiving.
“My sister called me Saturday morning, and said, ‘Blake was killed last night,’” Charlotte remembers. “I thought, this cannot be happening.”
David’s illness had been a physical devastation. This devastation was emotional.
“My sister had been my rock and David’s rock,” Charlotte says. “David is like a big brother to her. She was so devastated with what we were going through.”
They found their roles reversed. David gave his clutch cross to his sister-in-law, who placed it in her son’s hands.
g g g
David and Charlotte met in Burlington as kindergartners. She later sat behind him in English class at Williams High School, and could not see the front of the room. That was OK, because she didn’t particularly like the teacher. They began dating their freshman year of college, when he was at Wake Forest University and she was at Guilford College.
In college, David volunteered at the hospital as an orderly and emergency room technician.
“I just had an awesome experience,” he says. “I was doing sutures and all kinds of procedures.”
He loved surgery. While in medical school, he worked summers in a surgical hospital as an operating room technician, assisting in more than 800 surgeries.
“I had awesome surgical skills when I got out of medical school,” David says. “The deliveries — just the whole package was wonderful.”
He related to the patients, and almost every delivery was positive. “So for the next 33 years, I didn’t get much sleep.”
David and Charlotte will be married 44 years this summer, and agree that his illness has been the hardest stretch of their marriage.
“When I was teaching and when he was in med school — those were some lean years,” Charlotte says. “We’ve had our setbacks. Our first baby was stillborn at five months. That was hard. But we’re very pragmatic people. We’ve been mighty blessed all along, but this was by far the hardest thing.”
g g g
But they made it, and so they’re gonna celebrate. There’s the celebration this weekend, and in September, there will be a reunion at Duke of transplant patients. If you survive for one year post-transplant, you’re invited, and you get your picture put on the wall at the hospital.
“I told him when we got there, ‘Your picture’s gonna be on the wall,’ ” Charlotte says.
Even if she may have had to be a bit of a “drill sergeant” at times, David says, or maybe because of it.
His picture’s gonna be on that wall.
g g g
His picture may turn up in other places. The doctor who delivered 5,000 babies was himself saved by an infant. Isn’t that beautiful?
“I’m in a good position to be an advocate for cord blood transplants,” David says, “and talk to OBs as a peer.”
“That is something we’d like to pursue,” Charlotte says, “because it saved his life.”
David has started volunteering with Rowan Helping Ministries and the Community Care Clinic. He’s continuing to play bass guitar at First Presbyterian’s Life Center worship, and has returned to singing in the St. John’s Men’s Chorus.
He’s heard the clichés about life being richer as a cancer survivor, but it’s a fact.
“Life glided along with no sense of urgency or appreciation of living in the moment,” he says. “I have come to realize just how much our family and friendships mean to me, and how wonderful it is to live for today.”
Every day, Charlotte says, there are breakthroughs with stem cell research. Obviously, the couple hopes more families will donate cord blood.
“When you think about throwing away all that valuable blood,” she says, “it’s sad.”
Surrounded by the late-afternoon sunlight, David agrees.
“It’s like gold,” he says.

If you happen to be sitting in Koco Java this weekend and see a guy you could swear you’ve seen... read more