For performing artists, Kaleidoscope festival in Kannapolis a ‘perfect place’ to start 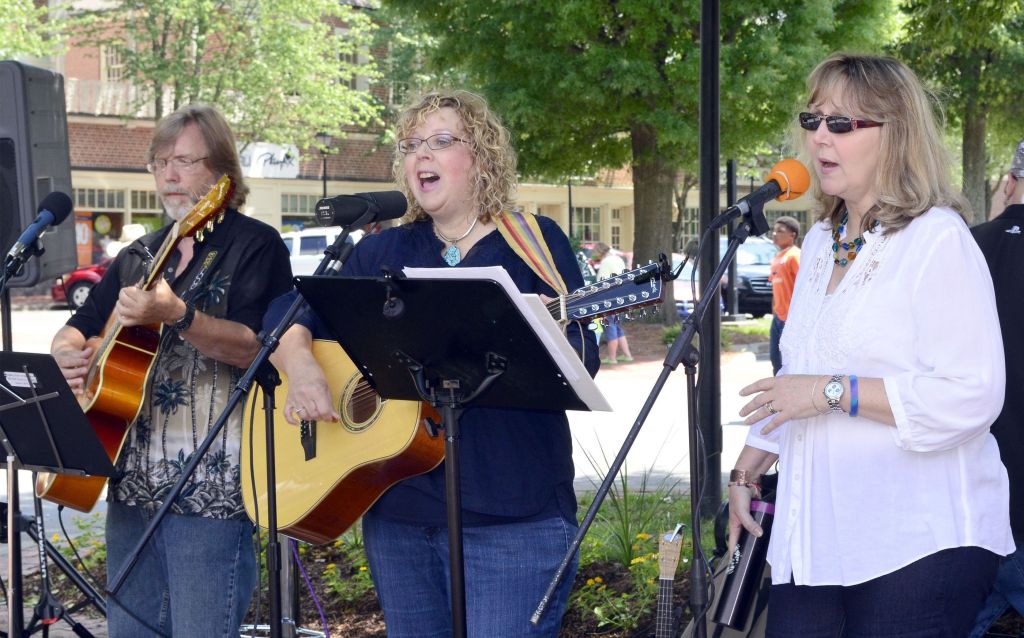 KANNAPOLIS — For a new band just starting out, the first public gig is all-important.
The members of Blonde Ambition, who played together in public for the first time at Saturday’s Kaleidoscope Cultural Arts Festival, have been singing together for over two years, Alice Garaas said.
“We do a mix of acoustic songs from the ’60s, focusing on harmony,” Garaas said. “The Beatles, Crosby, Stills and Nash.”
She and her bandmates, Alan and Trish Johnson, have sung together on their church’s praise team and talked for a long time about starting a band.
The Kaleidoscope festival gave them their first opportunity to perform.
As the sun shone down on Kannapolis, they set up their music stands and microphones, turned their guitars and Garaas’ ukulele, and made sure everything was just so.
And then, they launched into the Crosby, Stills, Nash and Young song “Teach Your Children.”
Organizer Michael Knox estimated the day’s attendance at about 750.
Two food vendors on site sold out, Knox said.
Vendors of handmade crafts, art and other goods lined the sidewalks of West Avenue downtown.
Spectators gathered to watch performances under the oak trees, including musicians, spoken-word artists and poets.
Unlike bars and restaurants, which can be very selective about entertainment, or other venues that charge fees, Knox said the Kaleidoscope festivals are a chance for new bands and artists to perform for an audience.
“It’s free, and it’s an opportunity,” Knox said. “A lot of (venues) don’t have an open invitation. Here, we have an open invitation, as long as you’re family friendly and your lyrics are clean.”
The response has been great, Knox said. Almost all of his performance slots are full for the remaining Kaleidoscope events on Sept. 27 and Oct. 25.
“Just as you have busking in Asheville, where performers can put a hat out and make money on street corners, here you have an opportunity to perform without the hassle of going through a booking agent,” Knox said.
Another draw for performers like Andrew Robbins is the open-air atmosphere.
Robbins, of Holly Springs, performs electronic music under the stage name Hendecatope.
With keyboards and synthesizers set up in the sun on the corner of West Avenue and West First Street, Robbins created a rolling symphony of ambient sound.
Playing outdoors is a rare thing, Robbins said, but he enjoys it for two reasons.
“My inspirations come from nature, and emotions and feelings,” Robbins said. “I also draw from science fiction.”
Playing outdoors not only connects him with nature, Robbins said, but it gives him “the busking street musician experience.”
For Robbins, part of the fun is watching people react to his music, “whether they like it or don’t like it,” and interact with it as they pass by.
Out at Kaleidoscope on Saturday, Robbins said, “I had quite a few people drop by. It’s great.”
Another musician, Chris Montgomery of Mooresville, added Kaleidoscope to his schedule as he prepared to play another gig later in the day in Concord.
Montgomery, who runs a music store in Mooresville, said word of mouth also drew him to the festival.
“I would say about half of the artists who were here this time were different, compared to April,” Knox said.
“It’s definitely growing,” Knox said. “A lot of artists are telling other artist friends about the festival.”
Contact Hugh Fisher via the editor’s desk at 704-797-4244.

Full steam ahead in Spencer