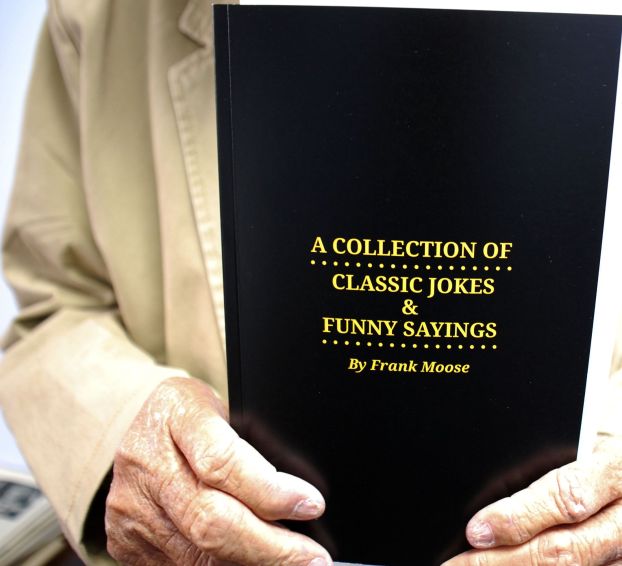 CONCORD — Frank Moose might not be the funniest man in Concord, but he knows a good joke when he hears one.
Over many years, Moose maintained a habit of jotting down jokes and funny sayings he had heard and stuffing those slips of paper into a desk drawer at home.
He usually carried a small notebook into which he would write the essence of a joke, then flesh it out once he returned home.
“I can always remember a good joke,” Moose says. “If it’s off-color, I’m not interested in it. I want clean, wholesome stuff.”
One day, Moose opened up the drawer full of jokes and, reading through them, found himself chuckling all over again. He realized he had a lot of material to work with, and that maybe his collection was worth sharing.
So at age 82, Moose has published his first book: “A Collection of Classic Jokes & Funny Sayings.” He sells it for $15, and the little paperback book of 80 pages is available in six Concord retail store or just by contacting him.
“I can sit down with that book, read it and crack up every time,” Moose says.
As with most jokes and expressions, Moose has no idea of the origins for the ones he has published. He hasn’t copyrighted his book, either. The sources, he says, are “unlimited.”
They involve a wide range of subjects: preachers, doctors, farmer’s daughters, men in bars, cowboys, blondes, the afterlife, fishing, golfing, innocent children and talking animals — to name a few.
Here’s an example:

A woman was trying to pour ketchup out of a bottle, and during her struggle, the telephone rang. She asked her 4-year-old daughter to answer it.
“It’s the preacher, Mommy,” the little girl said.
Then she added, “Mommy can’t come to the phone right now. She’s hitting the bottle.”

While most of his collection is devoted to story jokes, Moose has included quicker hits such as, “If you’re thinking of starting a grass-cutting business, buy a lawn tractor and you’ll get mower for your money.”
Or he’ll give you the definition for dieting, which is, of course, “The punishment for exceeding the feed limit.”
Moose devotes four pages and 25 entries to motherly quotes which follow the line: “My mother taught me …”
Some examples: “My mother taught me about hypocrisy: ‘If I told you once I’ve told you a million times, don’t exaggerate!’” or “My mother taught me about behavior modification: ‘Stop acting like your father.’” or “My mother taught me about humor: ‘When that lawn mower cuts off your toes, don’t come running to me.’”
Moose is a Concord native and 1950 graduate of Concord High. To ease the financial burden on his father, who had suffered a heart attack, Moose interrupted his college education by serving in the Army for two years, mostly in Germany.
The G.I. Bill paid for his remaining years in school, and he graduated with a business administration degree from the University of North Carolina at Chapel Hill.
He first worked for J.C. Penney Co. in Newport News, Va., before taking a longtime management position with Saunders Truck Leasing Co., based in Birmingham, Ala.
Moose became irritated with moving around so much with his job. He and his wife of 51 years, Willa, inherited his parents’ homeplace in Concord and relocated here. They restored the house, while Moose went into business for himself.
His company, HOYCO, markets plastic bags.
“I enjoy what I do,” Moose says. “I’ll work until I die.”
Moose thinks his book would be a good resource for people who regularly make speeches, or for other people looking for ways to warm up a crowd.
He says the sole purpose of publishing the book — AlphaGraphics of Charlotte was the printer — was to make people laugh.
Moose put his favorite saying on the outside back cover of his book:

If you have anything nice to say about me,
Now is the time for it to be said —
because I can’t read my tombstone after I’m dead.

“I’m loaded for volume two,” Moose adds. I can visualize three, four or five volumes.”
Frank Moose can be reached at 704-782-4553, or 704-701-3468. His email address is hoycomoose2@gmail.com, and his mailing address is 351 Summit Court SE, Concord, NC 28025. His book is available in Concord at Angela’s, Brickhouse Grill, Downtown Bistro, Phidippides, Wayside Grill and White Owl Antique Mall.

Prayers for a bountiful harvest at Sacred Heart

There was a time when the rhythm of life turned with the cycle of the seasons, from seed-time to harvest.... read more