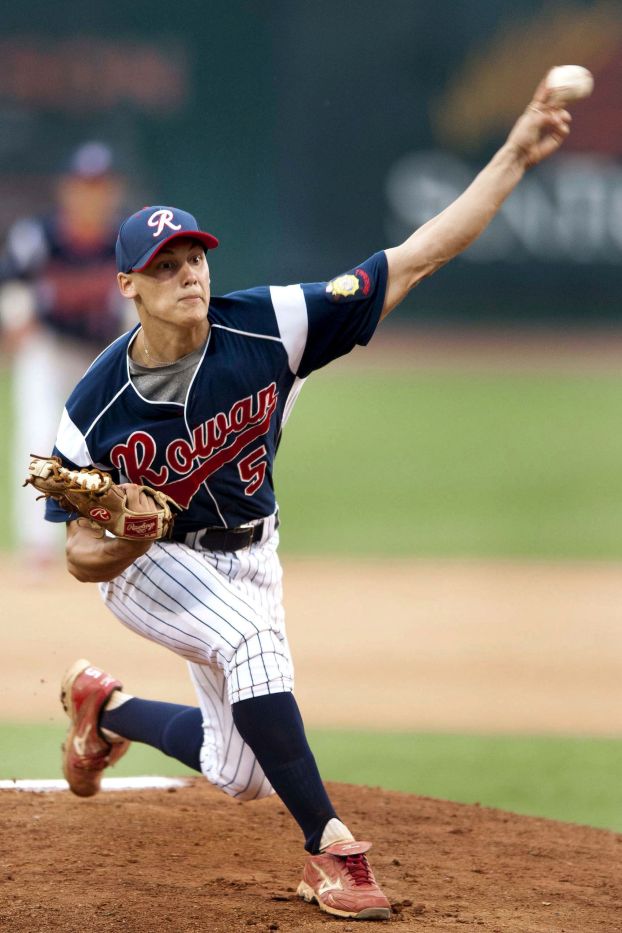 SALISBURY — Blame Rowan County center fielder Harrison Baucom for things getting a little crazy at rainy Newman Park on Thursday.
No-hitters are never to be mentioned aloud, not even no-hitters that are only in the fourth inning, and Baucom broke the time-honored code of baseball silence.
“We’re in the outfield and Harrison says, ‘Hey, Connor’s got a no-hitter going,’” Rowan right fielder Luke Setzer reported with a laugh. “The next thing we know, we’re looking up and a ball is going over the fence. Happens every time.”
UNC Wilmington-bound Zack Canada hit that ball out of sight for Eastern Randolph to end Johnson’s perfect game, no-hitter and shutout with one swing, but Johnson and Rowan still cruised 12-5.
It was the fourth straight victory for a hot-hitting Rowan team that’s been on a roll since a shorthanded loss to Kernersville opening night. Rowan pounded out 15 hits.
“We were able to jump on them quick and put pressure on them,” first baseman Bowden said. “We swung the bats well at Randolph Wednesday, and it just carried over.”
Setzer lashed three doubles in a row. Baucom made up for jinxing Johnson with a solo homer and some great defense. Riley Myers, hottest hitter on the planet, went 3-for-3. Bowden and Jeremy Simpson had two hits each. Michael Pinkston added a pinch-hit double.
“We did a good job of working counts and taking some walks early in the game and the groundballs we’re hitting are finding holes,” Rowan coach Jim Gantt said. “That might not happen as the year goes on, but right now it’s working out for us on offense.”
Johnson, 10-0 during a dominant high school season at East Rowan, sailed through the top of the first innings with two groundballs to Simpson at short and a flyout.
Before he returned to the mound, he had a 3-0 cushion. First-inning walks to Baucom, Michael Caldwell and Bowden set the table for a run-scoring single by the scalding Myers, an RBI fielder’s choice off the bat of Setzer and a run-scoring single by Ryan Jones.
“Guys did a good job at the plate,” Gantt said. “They aren’t going up there trying to big-fly everything, and they’re getting the barrel on the ball a lot.”
It was 5-0 after Bowden and Myers delivered RBI singles in the second, and when you stake Johnson, a Catawba signee, to a five-run lead, it’s pretty much over.
“Johnson threw the ball well, fastballs and changeups,” Gantt said. “He only threw a couple of curveballs. That wasn’t necessarily by design, but they were having trouble lining up his fastball, so we stayed with it.”
Setzer was the offensive star for Rowan. He sent doubles whistling to the walls in the fourth, sixth and eighth.
“I got pitches to hit,” Setzer said. “The first double I crushed was on a hanging slider. The last two at-bats I got fastballs over the plate to hit.”
The only baserunners Johnson allowed during the first five innings were Canada’s homer and a one-out walk in the fifth.
That no-doubt homer was something new for Johnson (2-0). He didn’t allow a homer — or a triple — during the prep season, and he allowed only a handful of doubles.
Following Johnson, who exited in the sixth, were Hunter Shepherd, Blake Cauble and Travis Holshouser. Shepherd held the lead despite some defensive issues behind him. Cauble pitched a 1-2-3 eighth. Holshouser faced only three batters in the ninth, as a stretching Bowden ended the game with a DP.
Chase Jarrett will start for Rowan tonight at Lake Norman against Mooresville Post 66.