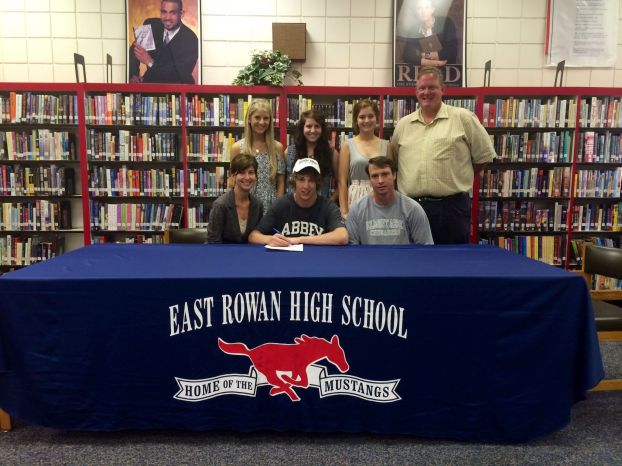 GRANITE QUARRY — Appearances can be deceiving.
Tall and with longish hair and longish arms, East Rowan senior Wyatt Blume looks more like a baseball player than the sterotypical buzz-cut, thick-bodied wrestler.
When he’s informed he looks more like a first baseman than a wrestling recruit, Blume isn’t offended.
“I like baseball and I never missed any of the games,” said Blume, a close friend and relative of East Rowan pitching hero Connor Johnson. “I used to play baseball myself, but I’d get really mad whenever I struck out. My dad told me I needed to find something more physical. That’s when I got into wrestling.”
East wrestling has benefited from Blume’s transition from at-bats to the mat. He placed fifth in 3A at 145 pounds as a junior. As a senior for the county champs, he was 3A state runner-up at 152.
Blume is good enough that he’ll have a chance to continue wrestling in college. He signed recently with Belmont Abbey.
Blume is calm and polite while seated on a couch at East talking about his sport, but his personality changes when the lights come on and an opponent is trying to put him on his back.
“Wyatt’s got something you can’t teach,” East coach Barry Justus said. “He’s got a bit of nasty to him when he’s on the mat. He’s what I like to call a mean nice kid. He’s that type of kid who doesn’t like to lose.”
He didn’t lose often the last two seasons. He was 24-5 as a junior and 45-8 as a senior.
Blume remembers his first wrestling match. He won it.
“I’m thinking, ‘You know, this is pretty easy,’” Blume said. “But then I started losing.”
Blume has exceptional endurance to go along with his length, and he hated losing badly enough to start going the extra mile. He has invested an enormous amount of time into wrestling.
“He did everything in his power to make himself better,” Justus said. “A lot of practices. A lot of tournaments. Constantly working on his trade. He’s got a drive for success and he’s constantly correcting weaknesses. He had some difficulty for a while with opponents putting him in a cradle, so he learned to keep his chest away from his knees.”
Blume would go through a tough practice at East, and then he’d do his own extra workout. There were also days when he’d double up, as he put it, working with Coach Justus at East, and then working with other county coaches such as Shane Miller and Bryce Vandenburg.
“I’ve had a lot of people who have helped me in my career,” Blume said.
His junior year, Blume won the 138-pound class in the Rowan County Championships. A bout with mono over Christmas break pinned him for six weeks, but he finished that season with a rush, winning conference and regional championship before that fifth-place finish in the state event.
As a senior, Blume started out looking invincible and was still unbeaten when he won the county championship in December at 152. He took his frst 20 matches.
“Then there were two weeks in January where he hit a slump,” Justus said. “But as champions will do, he found a way to fight through that adversity.”
Blume credits his mother for getting him back on track.
“I was worrying too much about colleges and putting extra pressure on myself,” Blume said. “Mom reminded me I just needed to be myself. I just needed to wrestle like I’d always wrestled.”
When Blume was beaten 12-3 by Central Davidson’s Christian Pompey in the second round of the 3A Midwest Regional, his goal of reaching the state tournament was in serious jeopardy.
But he pulled out three wrestle-back matches — including a 3-2 scrap with Carson’s Jaron McMasters — to reach the consolation final and secure a berth in the state tournament.
Then he beat Pompey in a rematch 13-5 for third place in the regional.
“I thought he dug really deep to win some close matches and qualify,” Justus said.
Blume saved his best for last in the state tournament.
“Late in the season, he wrestled with the mindset of punishing people, of not letting them score,” Justus said.
Blume’s shining moment at states came in his semifinal match with Western Regional champ Zacharias Fincannon of Hickory St.Stephens. Fincannon came into the match 55-1.
“When you hear someone has a record like that, you’re concerned, but I was just determined to go out there as hard as I could,” Blume said. “I just kept backing him up.”
Added Justus, “Wyatt wrestled very close to a perfect match.”
Blume didn’t win gold. He lost the state-championship bout 8-4 to Southern Guilford’s Drake Patrum, who dropped only two matches all season.
“I’m not a person who gets nervous normally, but when you wrestle for a state championship there are going to be nerves,” Blume said. “I wish it had worked out differently, but it was still a great season.”
Wrestling doesn’t stop for Blume, even this time of year. He just returned from the Southeast Regional in Atlanta where he placed fifth in his weight class in Greco-Roman or “Olympic-style” wrestling.
Belmont Abbey, near Gastonia, has a strong wrestling program and was an easy choice for Blume, although he also visited Gardner-Webb. He says he’ll wrestle at 149 or 157 pounds in college.
“When I visited Belmont Abbey, the coach personally gave me a tour of the school,” Blume said. “I think you feel it when you’re at the right place, and that’s where I felt comfortable.”
It’s a great opportunity for a kid who used to strike out. He’s become a home-run hitter in a sport he loves.