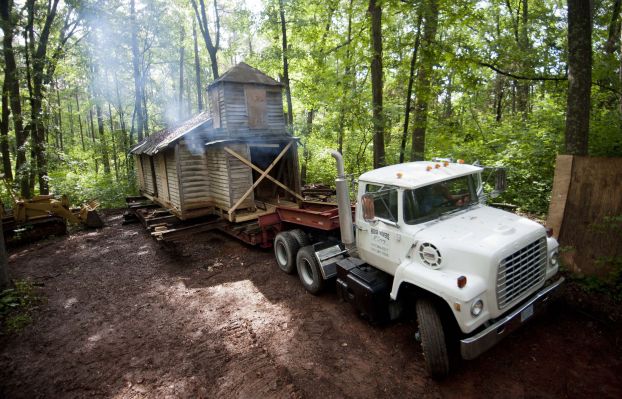 CHINA GROVE — Amid the roars and groans of diesel engines, the one-room Neely School emerged Friday morning from its home in the deep brush, as if waking up from a long nap.
“Grandpa’s coming out of the woods,” Mary Neely Grissom said, watching the old school building being pulled on a flatbed trailer up the muddy path.
Her words held meaning much of the Neely family can understand, especially her sister, Cynthia Neely English, and cousins Phyllis Neely Thomside and Ruth Neely Williams.
Early in the 20th century, their grandfather Julius Neely (1872-1949) built the schoolhouse with his bare hands. He believed in the importance of education for his children and others in this rural area off Neelytown Road — and he set out to provide an appropriate facility for it.
A minister and farmer, he felled trees on his property and took the lumber to a saw mill so it could be cut into boards. Julius then constructed a simple one-room building, which featured a small alcove for an entrance and a cupola holding the school bell.
“I’m going to find a bell — that’s going to be my donation,” Grissom promised. “Yes, we have to have a bell.”
Julius Neely built the schoolhouse about a quarter-mile from Neelytown Road and his own home. The site of Julius and Katie Neely’s old homeplace will be the new, more visible location for the schoolhouse.
Neely School might be the oldest one-room, African-American schoolhouse still surviving in Rowan County.
“That’s why we think it’s unique,” said Grissom, executive director and chief executive officer of the nonprofit Historic Neely School Foundation, formed in 2010.
Preservation consultant Angelo Franceschina said Julius Neely never had a deed recorded for the school, so the best educated guess for its origin is 1908.
ggg
The entrance suggests it could have had a double door or one large single door. The windows were probably six-over-six panes. Research has indicated the school system supplied the school with 15 teachers over its 40-year run from 1908 to 1948. Several of those teachers were Neelys.
“To me, it’s like a little church that’s been sitting in the woods,” Franceschina said.
The tough white oak siding and a tin roof probably prevented the schoolhouse from completely falling in over the decades of neglect and overgrowth.
Relying on one teacher at a time, the school served African-American children in the first through seventh grades. Over its four decades, the school educated up to 400 children.
The recently established foundation, which includes family and alumni of the school, has a multi-faceted plan beyond the restoration of the schoolhouse.
On 1.5 acres of Julius and Katie Neely’s original homeplace, the foundation has hopes for a children’s playground, walking trail, picnic shelter and community center. This spot lies along Neelytown Road, not far from the intersection of Corriher Gravel Road.
But the first order of business will be getting the school off the flatbed trailer and onto a foundation. Then comes the work of restoring it.
Willie Grissom, Mary’s husband, said the foundation had a decision to make early on. Should it restore the schoolhouse where it was back in the woods and build a road to it, or should it be moved the relatively short distance to the original home site so there could be easy access from Neelytown Road?
They decided on the latter course of action.
Contractor Alfred Wilson prepared the schoolhouse for the move.
“Al did a good job of getting it straightened and back square,” said engineer David Morton, who has assisted on the project with his father, Jim.
Wilson braced the back and sides to help keep things together in the move.
ggg
Mary Grissom and her cousin Phyllis Thomside attended Neely School in the first through third grades. They remember four to six children being in each class, and one teacher for everybody.
The big room had a pot-bellied stove for heat. A chalkboard remains inside, Mary Grissom said. Students relied on outhouses for restrooms, and children either packed their lunches or walked home if they lived close enough. Recess was held on the grounds around the schoolhouse.
“You know, you made your own playground,” Grissom said.
Most of the parents in this area were farmers, or they worked at Cannon Mills.
Julius Neely sometimes used the schoolhouse for some of his preaching.
“After all my grandfather went through, we just couldn’t let it go,” said Thomside, who lives in Salisbury.
The women said two of their aunts — Mary Neely Ramseur and Cassie N. Blackwell — taught at the school. Grissom remembers Ramseur cooking pinto beans and chicken and dumplings on the school stove.
Several years ago, Aaron Neely took Grissom, Thomside and others down into the woods by tractor to let them see the old school. Grissom said she had no idea it had survived all these years.
“I was proud of it when I found out it was down there and still standing,” Grissom said. “… The outside is solid, just solid.”
The idea for saving the schoolhouse and creating a foundation probably took root with six grandchildren at a family reunion, and each branch of the Neely family was asked to provide a representative.
The group also received help and guidance from the Historical Society of South Rowan, Livingstone College, Morton Engineering, McCrary House Movers, Ed Clement of Historic Salisbury Foundation, China Grove Town Manager Ken Deal, former Rowan County Commissioner Raymond Coltrain and others.
One of the biggest obstacles was tracking down 60 descendants of Julius and Katie Neely and having them sign over their rights to the 1.5 acres on which the old schoolhouse will be a focal point.
Those efforts led foundation members to relatives in places as far off as New York, California and Saudi Arabia.
Contact Mark Wineka at 704-797-4263.

Daverian “Tre’” Williams has earned over a quarter of a million dollars in scholarships so far. Although Williams, recent graduate... read more