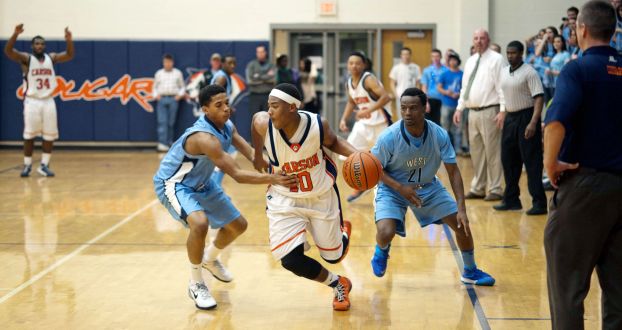 Tre Williams will be a stout backcourt presence at DCCC

Sneaky Tre Williams got by point guards so much in his prep career, it’s hard to label him as deceptive anymore.
After a senior year where he averaged 16.7 points, fans couldn’t deny Williams was one of the best players in the county. Williams was able to score in a variety of manners and was a big part of Colton Laws’ 18.3 points per game average.
Williams, who carries a 3.85 GPA, is a math guy and likes getting a definitive answer. Opposing coaches may not have expected much from a 5-foot-10 floor general at first, but Carson coach Brian Perry knew what he would get most nights.
“They’re ain’t many point guards that throw the shot put and play linebacker on the football team,” Perry said. “His size and strength allowed him to score a lot of different ways.”
Rowan folks know Williams could sling the shot put with just about anyone in the state and hold his own on the gridiron. Williams was an all-county football player the past two years and finished sixth in the state in the 3A shot put. And then there’s hoops where he was a three-time all-county pick. The scoring average increased each year from 13.4 as a sophomore to 14.1 to 16.7 this year and eventually Williams was a guy coaches had to gameplan for. He attracted looks from some colleges, but opted to stay close to home and attend Davidson County Community College recently.
At 195 pounds, Williams was stronger than a lot of backcourt players and he used that to his advantage. He’s stoutly, not unlike North Rowan grad Oshon West, who transferred to DCCC last month after a year at Louisburg.
“To really appreciate Tre, you have to watch him play to see all the things he does,” Perry said.
It’s important to note that Williams isn’t signing with DCCC. He’ll be able to compete for a spot on a team when he enrolls in the fall. That’s a team that crossed 100 points 16 times last year and was second in the nation in scoring with a 104 points per game average. The Storm were Tarheel Conference co-champions last year with a 22-5 record.
Williams could shoot, drive or toss it in to Laws, an East Carolina baseball signee who was just as effective in the paint. Laws also crossed 1,000 points one game after Williams.
“We’re excited about having him come here,” DCCC coach Matt Ridge said. “He’s talented and he’s well-coached. We’re getting some really good players in our program and he’ll compete for playing time.”
Williams is a good shooter and quick enough to get to the hoop in time for a good look. Williams was John Stockton to Laws’ Karl Malone. Not overly flashy, but consistently effective.
“He could score when he had to and feed Colton when he had to,” Perry said.
Carson hosted Cox Mill in the SPC championship and fell to the Chargers for the third time in a 68-64 setback. The Cougars didn’t have any hangover, cruising by West Henderson in the playoff opener. The next contest provided maybe the biggest win in school history in a stunning 63-56 upset of No. 1 seed Asheville Erwin. The playoff charge included the first third-round appearance in Carson history and highlighted a 17-12 season.
“I loved the unity we had after that Cox Mill game,” Williams said. “We did whatever it took to be able to advance.”
Williams scored 37 points in a game twice, once against Statesville his junior year and in the opening game against Central Cabarrus as a senior.
Division II Newberry, a South Atlantic Conference rival of Catawba, offered Williams a nice financial package, but there were other options.
Williams knows the value of loyalty and the DCCC coach was hot on the trail before anyone else, coming to Carson games throughout the season. With the Storm, Williams will get decent exposure to curious Division I coaches and possibly capitalize on a chance to play at a four-year school.
“Coach Ridge has been recruiting me since the beginning,” Williams said. “I like the atmosphere. A lot of people comes to their games.”
Williams cites Carson athletic director Mark Woody as a mentor and he says he has an interest in being an AD or a coach someday. He currently coaches his girlfriend, Alex Allen, who has another year left at Carson after an all-county season.

It’s a good thing that cadet life for Tyler L’Hommedieu officially will start with a meet-the-football-coaches picnic at West Point... read more