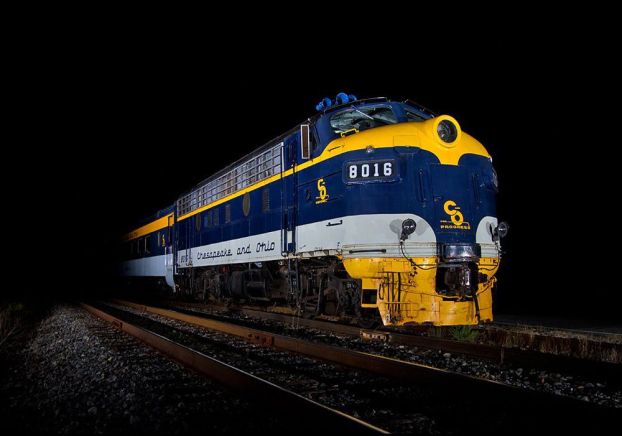 The N.C. Transportation Museum’s “Streamliners at Spencer” is three days of rail fan nirvana. Twenty-six streamliner locomotives, built in the 1930s through the 1950s, will be gathered at the museum for a one-time, history making event.

Visitors will experience the largest gathering of these historic locomotives on record, take photographs of each locomotive at the center of the turntable, enjoy train rides pulled by the vintage engines and take cab tours of select locomotives.
Each day will feature different photo opportunities, highlighting different locomotives, different groupings of locomotives, and different engines in operation on the rails.
The event will also feature Amtrak and NC DOT exhibit trains, rail artist Andy Fletcher, railroad industry and heritage group displays, tours of the museum’s private rail cars, Norfolk Southern’s official band, The Lawmen, the largest remaining Roundhouse in North America with 37 stalls, historic buildings of the former Spencer Shops and an event like no other.
While each locomotive is historic and has an individual history to tell, some of the event’s confirmed locomotives are of particular interest to rail fans.
The only steam-powered Streamliner engine scheduled to appear, the Class J 611, known as The Spirit of Roanoke, is an iconic locomotive that will be a huge hit with rail fans. The Virginia Museum of Transportation and the N.C. Transportation Museum had previously announced that the engine would be moved to Spencer for restoration. Recent fund-raising successes, led by the “Fire Up 611” group, allowed that move to take place in time for the engine to be featured at “Streamliners at Spencer.”
The FT No. 103 Demonstrator unit is, in many ways, the forerunner and a “father figure” to all other diesel Streamliner Locomotives the event is featuring. The unit was created to convince business and corporate leaders that diesel engines were the future of rail travel. The engine did the job. When Electro Motive Company, which eventually became Electro Motive Division of General Motors, introduced this four-unit mixture of diesel freight locomotives in 1939, it became known as “The Diesel That Did It,” the diesel that killed steam locomotives.
One of the most famous and iconic diesel locomotives ever built, the stainless steel Burlington Route E5 No. 9911a “Silver Pilot” from the collection of the Illinois Railway Museum, is another iconic engine. The 1940 E5 was one of 11 cab units of its type built in 1940 and is the only one remaining in the world.
The American Locomotive Company (ALCo) PA-1, restored as the Nickel Plate Road (NKP) #190, is just one of only two ALCo PA locomotives remaining in the United States. Housed at the Oregon Rail Heritage Center in Portland, the unit is a great addition, with Trains Magazine calling it the “cherry on top” for the event.
Twenty-two other locomotives will be featured, including the museum’s own Southern E8 #6900 and the Southern FP7 #6133, as well as the Atlantic Coast Line E3 #501. Norfolk Southern Corporation’s F9 executive units, the Juniata Terminal Company’s two E8s and many more will also be highlighted.

Tickets for day and nighttime events are sold separately. Advance ticket sales have ended but tickets are still available at the museum on the day of the event.
Regular daytime admission to Streamliners at Spencer for activities running May 31 through June 1 will be $35 for adults and $25 for children.
More information on the attending locomotives can be found on the museum’s event blog, “Streamliners Scoop,” available at www.nctrans.org

The Rowan Museum will open its new exhibit “Over There, Over Here: Rowan Remembers World War I,” in conjunction with... read more