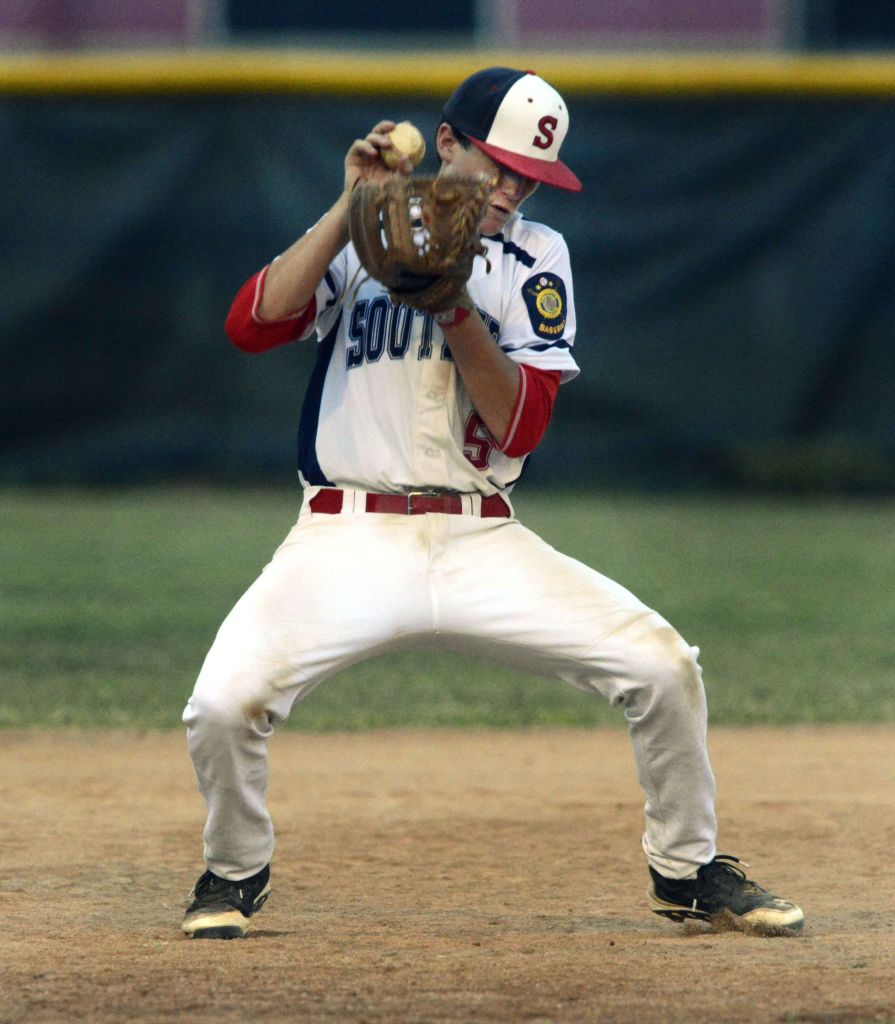 LANDIS — Sure, there are ways it could’ve been worse.
A swarm of locusts devouring all the grass on the field would’ve been worse and a hailstorm damaging all the cars in both parking lots would’ve been worse.
But that’s about all that comes to mind.
Southern Rowan lost 14-2 to visiting Mocksville on Wednesday, and being mercy-ruled at home by a team that had been struggling was only the start of SR’s rough night.
Catcher Matt Honeycutt, the guy the team can least afford to lose, exited in the second inning with a thumb injury. He joined outfielders Dylan Carpenter, a late scratch due to a leg injury, and Eric Stowe, in a sling after a weightlifting injury, on Southern’s M.A.S.H. unit.
Rumors that Southern might activate assistant coach Rick Hampton, who swung the bat well for Rowan County in the 1960s, proved unfounded. He’s out of eligibility.
“The injuries made things interesting putting together a lineup,” said Ben Hampton, Rick’s son and the guy who sits in the director’s chair for Southern Rowan. “Still, when your number is called, you’ve got to step up to it. That’s the bottom line.”
Southern (2-2) did not step up, at least not often. Matt Saul was called from right field to catch, and he performed as well as anyone could’ve hoped, so he was Southern’s star of the night.
“Honeycutt took a pitch on the thumb in practice, he shook it off, and then he gets hit in exactly the same place tonight,” Hampton explained. “Saul, for a guy who got called on unknowingly to catch, did a good job.”
Honeycutt, as he usually does, threw out the first guy who tried to steal for Mocksville, but that one perfect throw was all he had left.
Second baseman Chandler Corriher made a gold-glove play and center fielder Ben Gragg turned in a powerful throw for an out at second base. Gragg and Saul tripled, Jake Fulton laid down two nice bunts and SR turned two double plays, but that was about it as far as home-team positives.
Southern managed nine hits against Drew Weibley, who went the distance for Mocksville — but no clutch ones.
“We’ve got to swing the bats better than we did,” Hampton said.
Southern also struggled on defense, with seven errors, five in the infield. Errors on groundballs extended innings and led to six of Mocksville’s runs.
Weibley shut out Southern until the sixth, and by then, Mocksville (3-5) had a 9-0 lead.
No one had a bad night for Mocksville, which was 0-4 not long ago.
“All season we’ve swung the bats,” said Mocksville left fielder Nick Collins, a Louisburg signee who was a standout at West Rowan High. “It’s been 13-11 and 10-9 games for us, but tonight we got good pitching to go with the offense.”
Weibley is heading to Appalachian State as a regular student after a fine career at North Iredell High, in which he battled frequently against the Rowan schools. Despite the lopsidedness of the final score, Southern had Weibley in some trouble in the sixth and seventh when it was still a 9-2 game.
“The way it’s been going for us, even when it was 9-2 I was nervous,” Mocksville coach Charles Kurfees admitted.
But Weibley got the big out he needed to strand runners at second and third to end the sixth, and he got another easy out to end the seventh with the bases loaded.
“I was able to make some pitches when I had to,” Weibley said. “I threw a lot of strikes with the lead and my defense was behind me all night.”
Center fielder Charlie Muchukot was way, way behind his pitcher on a deep drive by Gragg to Death Valley in right-center in the seventh. Gragg launched it to the wrong part of South’s uniquely dimensioned field, and Muchukot ran almost to the Cabarrus County line to chase it down.
“Gragg got all of that one,” Weibley admitted with a smile. “But Charlie’s speed is a huge asset for us.”
Collins had a two-run single to right-center in the second inning against Southern starter Austin “Bo” Corriher, and when SR’s defense unraveled a little bit, Mocksville put up a five-spot for a 6-0 lead.
“Bo pitched great for South Rowan when he faced us at West Rowan this year,” Collins said. “He threw a gem against us. Tonight, I just went up there thinking backside against him, and he gave me a pitch I could drive that way.”
E.J. Jones lined a two-run homer over the short porch in left field for two Mocksville runs and an 8-0 lead in the fifth. Corriher was gone shortly after that. Jayvee Brandon Newton finished up on the mound for Southern, which figures to crank up Carson hurlers Dillon Atwell and John Daugherty this weekend.
“We gave them too many free passes and got behind on too many hitters,” Hampton said. “They’ve got some guys that are going to jump all over you when they get ahead in the count.”
Mocksville sent fans home a little earlier than expected with a five-run eighth. Kyle Mehl, another North Iredell product, had a double that was the biggest blow in that inning.
“We score runs,” Kurfees said. “Our pitching and defense have been shaky, but we did better tonight. When we get pitching and defense, we can compete.”
Gragg and Owen White had two hits each for Southern, but it was a long way from enough.
Southern will send young lefty Blake Johnson to the mound tonight when the teams meet again at Mocksville’s Rich Park at 7 p.m.
“The biggest thing is we’ve got to swing the bats better,” Hampton said. “We spent the whole night looking for that one timely hit that could’ve changed the game.”