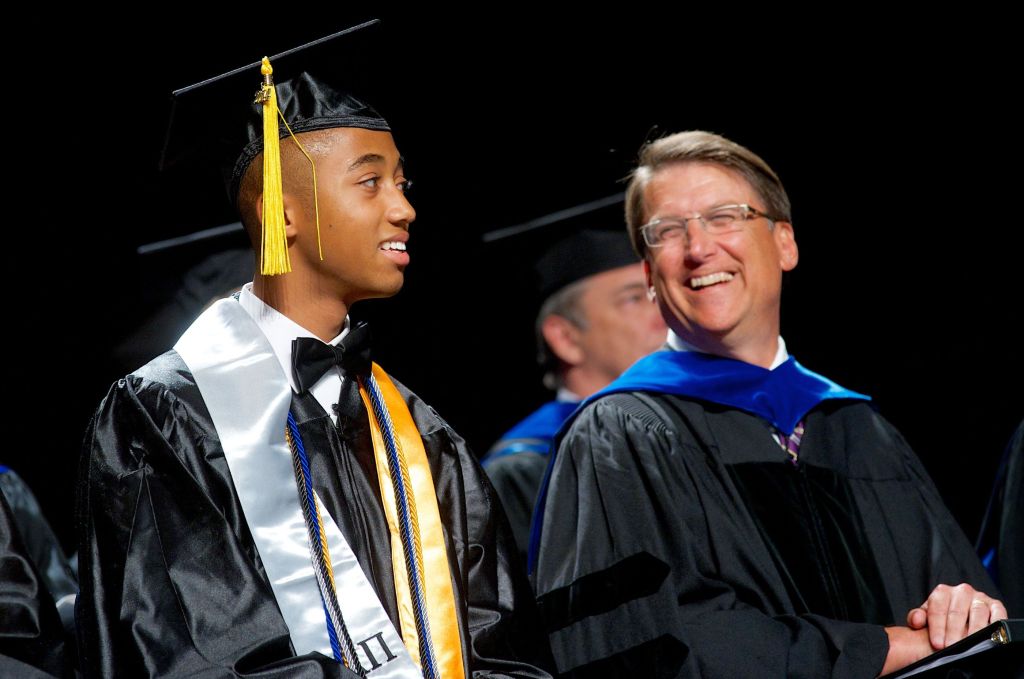 Daverian “Tre’” Williams has earned over a quarter of a million dollars in scholarships so far.
Although Williams, recent graduate of Cabarrus-Kannapolis Early College High School and Rowan-Cabarrus Community College, could not accept all of these scholarship awards, he is most proud of receiving the Morehead-Cain scholarship, which a press release called “the oldest, most prestigious merit scholarship program in the United States.”
Morehead-Cain scholars are provided with four full years, including summers, of fully funded education at the University of North Carolina at Chapel Hill. People from all over the globe seek out this recognition, but only 3 percent — about 50 — of each year’s nominees are selected as Morehead-Cain scholars.
In addition to a rigorous course load as a high school and college student, Williams has been actively engaged in the community. He has volunteered at the Community Free Clinic and led his varsity intramural football team to the championship games. He also started his own book and movie club and worked at McDonald’s as a crew trainer. Williams successfully balanced his academic pursuits and community interests, all while setting an example for his four younger siblings.
During Tre’s time at Rowan-Cabarrus, he earned all A’s — except for the one Spanish class where he earned a B. Instead of being defeated, though, Tre’ turned that into a challenge and plans to minor in Spanish and logic while majoring in both math and business.
“Tre’ graduated with both an associate in arts and an associate in science. And thanks to the college education he earned at Rowan-Cabarrus, he will go to Chapel Hill as a junior. It also means that Tre’ will get to use about half of his scholarship to work on his master’s degree at UNC,” said Dr. Carol S. Spalding, president of the college.
Williams, a Harrisburg resident, is a graduate of the Cabarrus-Kannapolis Early College High School, which is located at the Rowan-Cabarrus South Campus in Concord. As one of the college’s two early college programs, it allows students to earn a high school diploma and up to two years of college credit or an associate degree.
“It feels great to graduate from Rowan-Cabarrus,” Williams said. “I’ve worked hard, but I’m also very fortunate to be where I am in life.”
Williams spoke to nearly 5,000 people at the college’s 50th graduation ceremony.
“When I filled out the application for the Morehead-Cain Scholars program, I did not think I would receive it,” he said. “To accomplish great things, we must not only act but dream. Dreams aren’t just for little children. They’re a driving force of humanity.”
“I made that dream into a goal, and I made that goal into a commitment. A dream without a plan will always stay a dream.” he said. “I challenge each of you to grab those dreams because, once you do, the future is yours.”
Although Williams is unsure about his exact career path, he feels his chosen fields of study “will open up a broad range of possibilities.”
In addition to the college’s early college programs, Rowan-Cabarrus also offers high school students tuition-free courses for college credit through the Career & College Promise program. The tuition-free program allows students to simultaneously enroll in high school and college so they can receive both high school and college credit for courses taken as part of the program.

Wineka column: Today, the evil of detours; yesterday, the…