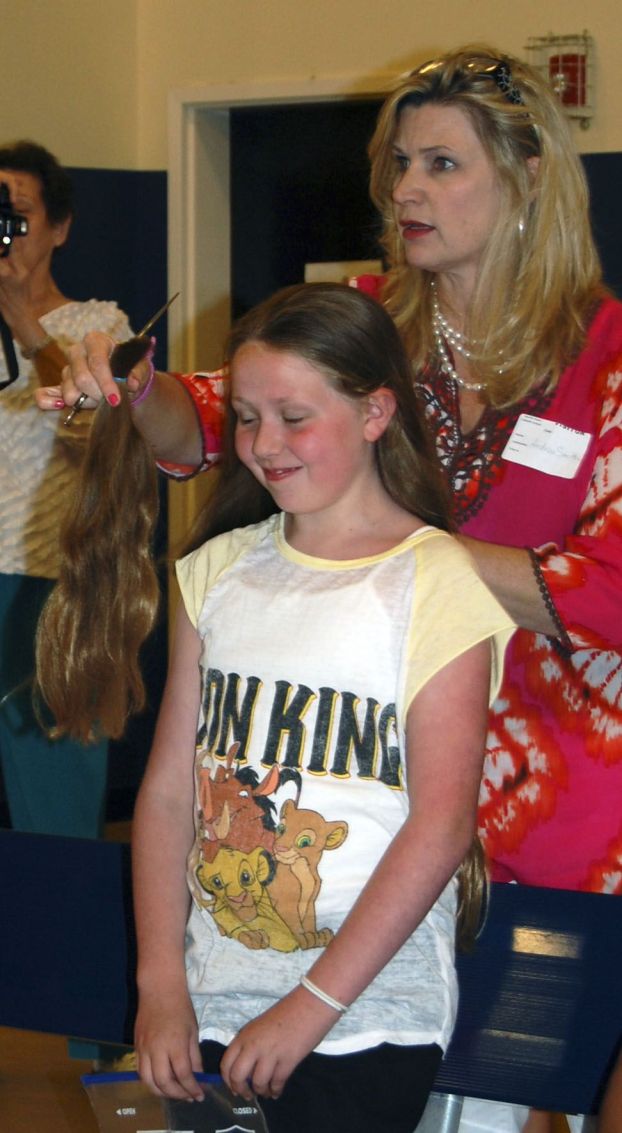 Love is in the hair

Every day, we take different aspects of life for granted – running water, electricity or our cell phones.
Most people even take for granted more personal items, such as their hair.
For many of the 14 million Americans diagnosed with cancer each year, however, their hair has become a luxury.
About a dozen girls from Sacred Heart Catholic School tackled this issue last week by donating some of their own hair for those less fortunate.
The hair cut during this event was donated to Locks of Love, a charity organization that collects donated hair to provide wigs or other hairpieces to children suffering from permanent hair loss.
“I know a lot of people with cancer. This makes them feel better,” said 6-year-old Clair Allen, who participated in the Sacred Heart event. Allen’s hair reached her hip before she had it cut at the school’s pep rally last week.
“They had to cut it off in two ponytails,” she said.
This event has been an annual tradition for the past 12 years at Sacred Heart. All of the girls wanted to help, but each person had their own unique reason for giving.
Lucy Burks, a second-grader, said her hair would get in the way while she would run. Since she couldn’t put her own hair up in a ponytail on her own, cutting it seemed to be the best plan.
“It feels really good,” Burks said.
“I don’t need all this hair,” said Miriam Roy, who had her hair cut for the third time. The first time she cut her hair for Locks of Love was in kindergarten.
“It’s better to go there than in the trash,” the eighth-grader said.
“I have extremely thick hair,” she said, adding that after the haircut, her head felt extremely light.
Those who give to Locks of Love must be able to provide a ponytail or braid of at least 10 inches in length. The hair is then repurposed for people under the age of 21 in the U.S. and Canada based on their financial needs.
After cutting her hair off, eighth-grade student Anna Patel said, “It feels so short. I had to cut my hair anyways. I thought it would be nice to help other people.”
Sure, the girls have practical reasons for donating their hair, but they all consistently explained that it comes from their willingness to help those less fortunate.
The girls who participated in the event at Sacred Heart were presented with a certificate and flower to thank them for their gift.
When I was in third grade, I too donated my hair to Locks of Love.
Events like this are something you never forget, and seeing the joy that goes along with giving made me extremely proud of these girls.