Forgotten Battles of World War II: The Battle of the Hurtgen Forest 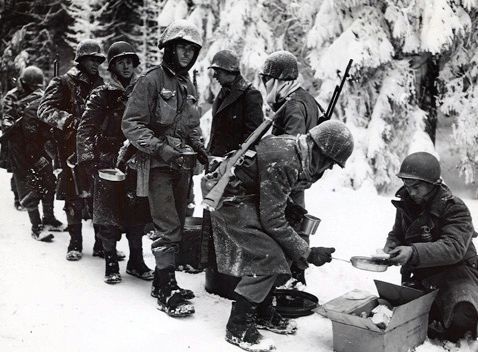 The Battle of the Hurtgen Forest from September 1944–February 1945 was overshadowed by the Battle of the Bulge victory and takes its place as one of the forgotten battles of World War II even though American losses were high. This battle was fought around some 50 square miles in a thick and cold forest that forms a triangle around the towns of Aachen, Duren and Monschau.
When the Germans were defeated in France in August 1944, GIs began to believe the war would be over by Christmas, but when the Americans reached German territory, things changed. It became the longest battle on German soil and the longest single battle the U.S. Army has ever fought.
The American forces consisted of eight infantry divisions, the 1st, 4th, 8th, 9th, 28th, 3rd Armored, 78th and the 83rd. The Germans had three divisions and parts of two more. The winter here was wet, and the ground was frozen and covered with snow that concealed German booby traps and mines.
During the nearly six months of combat, 120,000 GIs were moved into the triangle. Of those, more than 33,000 were killed or wounded while another 9,000 suffered from combat fatigue, trench foot and respiratory diseases. Each rifle company went into battle with 162 men and some returned seven days later with only about half remaining. Some companies that were sent replacements ended up with an estimated 151 percent loss of their original strength.
The Germans had some 80,000 scattered throughout the forest and had 28,000 casualties. The German chief of staff of the 7th Army called the fighting worse than anything he had seen on the Russian Front and compared it to the intense battles during the last two years of World War I.
So as you can realize, this was no small battle and should have never been forgotten. Brave American soldiers died horrible deaths, but the infantry at first made quick work of the German strongholds only to be later recognized as one of the worst defeats ever suffered by the U.S. Army. For actions during this battle, only one Medal of Honor was given, to PFC Marcario Garcia for single-handedly knocking out two machine guns that had pinned down his squad.
It has been argued, and rightfully so, that the Americans did not need this piece of real estate as it served no strategic purpose to winning the war. The Germans needed it for a staging area and to control the Rur Reservoir with its series of dams holding an artificial lake filled with millions of gallons of water so they could flood the areas downstream to slow down the American advancement. Infantry battled on the ground mostly because the weather hampered air support and the 100-foot fir trees weakened the artillery attack. The Germans, however, had developed shells that exploded 80 feet above the trees that covered the Americans with steel shrapnel and wood splinters. Well-placed German snipers did moderate damage to the Americans.
It wasn’t until the Battle of the Bulge began on Dec. 16, 1944, that there was a break in the battle of the Hurtgen Forest because of shifting American focus on the Bulge. Prior to the German withdrawal, they managed to blow up the major dam in the system, weakening even further American advancement and their spirit.
Today, the Hurtgen Forest has changed little from 1944. Damaged trees have sprouted new growth and towns and villages have been rebuilt. Bodies of soldiers from both sides are often discovered in what has become known as “dark and bloody ground.”
This concludes my series of 7 forgotten battles of WWII and my praise for the nurses of WWII. I wish to thank the Salisbury Post for running this series in the most sacred time for soldiers and their families on Memorial Day. I would also like to thank Post publisher Greg Anderson, who shared with me the story of his father, 1st Lt. William A. Anderson, who received the Bronze Star for his efforts in the Hurtgen Forest in November 1944. Greg’s pride in his father’s military service should be a lesson to us all that we must always honor and remember those who fought and defend America. For without the American soldier, life as we know it would no longer exist.
Rodney Cress is a Vietnam veteran and longtime advocate on veterans issues.