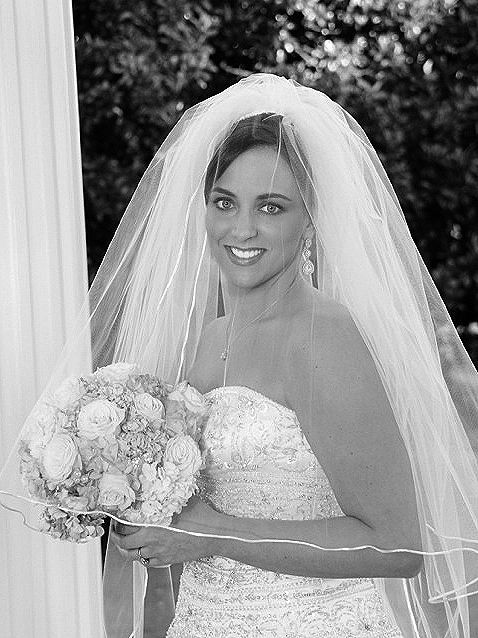 Meredith Anne Yost of Rockwell and Eric Shane Moss of Hampton, Va., were united in marriage Saturday, May 24, 2014, at St. John’s Lutheran Church in Salisbury.
Pastor Rhodes Woolly and Danielle Kosanovich officiated the 5 p.m. ceremony, which was followed by a reception at Salisbury Train Depot.
The bride was escorted by her father, Donny Yost, and attended by Miss Kristen Trexler of Salisbury as maid of honor and Mrs. Ashleigh Boulware of Rockwell as matron of honor. Her bridesmaids were Mrs. Kelsey Bradshaw of Salisbury; Miss Alexandra Kesler of Wilson; Miss Patsy Morgan of Rockwell; Mrs. Shannon Whitesides of Archdale; and Miss Rachael Woolsey of Raleigh.
Eric Revell of Newton Grove was the groom’s best man. Serving as groomsmen were Jarrett Bradshaw of Salisbury; Azad Karimi of Raleigh; Thomas McDole of Virginia Beach, Va.; Thomas Smith of Yorktown, Va.; Jacob Winchell of Selma; and Alex Yost, brother of the bride, of Rockwell.
Morgan Draper of Martin, Tenn., was flower girl, and Rhyley Simmerson of Indian Trail was ring bearer.
Guest registrars were Haley Kennedy of Wilmington, Kristen Kennedy of Clayton, Joy Simmerson of Indian Trail and Kristen Sides of Stanfield; Crucifer was Elizabeth Marlow of Kannapolis; and Acolytes were Sydney Whitesides of Archdale and Jake Draper of Martin, Tenn.
Soloists were brother of the bride Alex Yost and Nikki Goodman.
The bride is the daughter of Mr. and Mrs. Donny Yost of Rockwell. A 2005 graduate of East Rowan High School, Meredith earned a Bachelor of Science in Health Fitness Specialist from East Carolina University in 2009 and an Associate degree in Nursing from Rowan-Cabarrus Community College in 2013. She is a registered nurse at Forsyth Medical Center.
The groom is the son of Mr. Dennis Moss of Kannapolis and Mr. and Mrs. Mark Leibl of Clayton. He is the grandson of Emily Kennedy of Kannapolis. A 2001 graduate of Smithfield-Selma Senior High School, he earned a Bachelor of Science in Nuclear Engineering with a minor in Math from North Carolina State University in 2006. In 2012, he graduated summa cum laude from George Washington University with a Master of Science in Engineering Management. Shane is a Combat System Engineer with Huntington Ingalls industries.
Following a surprise tropical wedding trip, the couple will make their home in Hampton, Va.

SALISBURY ­— Over the past four years, the Singled Out Ministry at First Baptist Church has raised some $20,000 for... read more