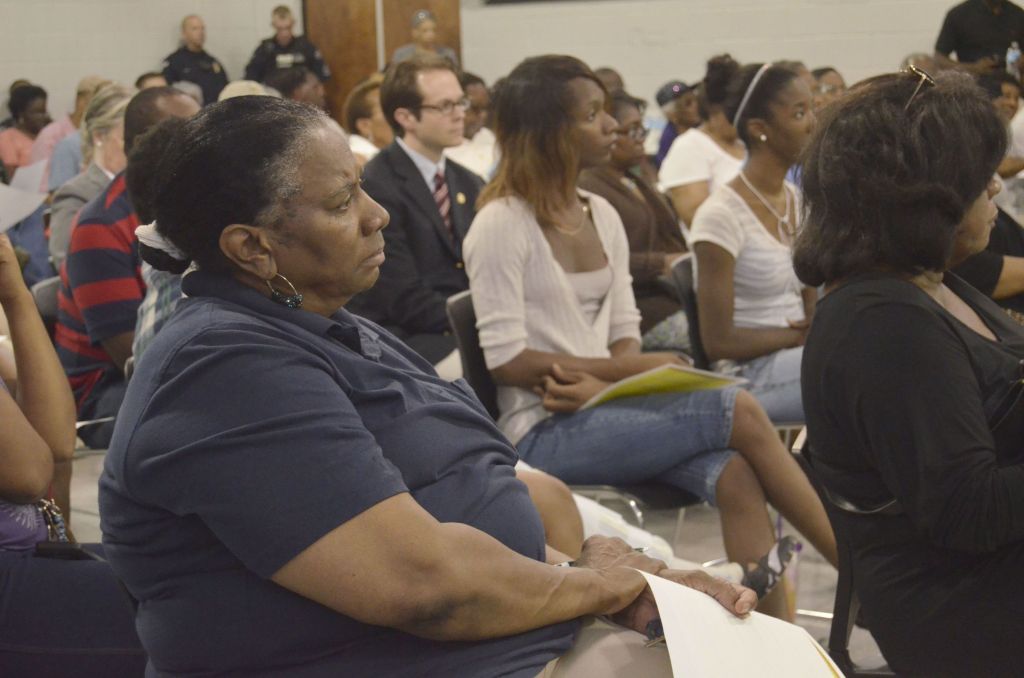 Salisbury Police Chief Rory Collins outlined the plans his department implemented to tackle violent crimes in the West End during a Tuesday night community meeting, but some residents there said their concerns went unheard.
The meeting lasted about an hour and a half with introduction of officers and how they’ve begun to address crime, but less than 30 minutes of the meeting focused on residents.
Residents, some of whom have been vocal in the past, did agree the community meeting was a concerted effort by Collins and his department and was a “step in the right direction.” They called for another meeting, one at which residents could speak freely and at length.
Collins said following the meeting there was time allotted for residents and he planned to be there until residents had asked all of their questions, but added “commenting stopped.” He did say there will be other opportunities for discussion.
He said the beginning of the meeting was a chance for residents to meet the officers patrolling their neighborhood and hear what strategies have been put into place. Collins said he hopes they can continue to build upon the relationships that have been established.
Kenneth Hardin, a member of a group of concerned citizens named “The Chamber,” has spoken openly at previous meetings about various members of his family who have been the victims of crimes including his parents, whose home was hit in the crossfire of gun shots.
Hardin said instead of the meeting being helpful, he felt it was a “disservice.”
“Nothing got accomplished,” he said, “people felt like this was just a show.”
Hardin said he’s had some good conversations one-on-one with Collins, but admitted there should be some conversations directed at citizens.
“Let the citizens run the meeting,” he suggested.
Hardin surmised that residents felt excluded and “talked at,” he said.
He said he felt Collins’ intentions were sincere, but feels things have gotten “too much out of his control.”
Hardin said he doesn’t want anyone to mistake citizens’ frustration for anger. He made a point of saying the citizens’ concerns did not materialize overnight. He said these are some of the same issues the West End community has had since he lived in the community more than a decade ago. He moved his family out of the neighborhood because of the crime.
Brenda Peoples encouraged residents to make their voices heard through the ballot come election time. Her brother, William Peoples, has been very vocal about the community in which he was raised and has criticized the police with not doing enough.
“Your vote is an expression of your concern,” Brenda said.
She also said she felt the West End community was an afterthought in the minds of elected and city officials.
Peoples said it took residents raising concerns to the City Council a month ago for change to begin to take place.
She would love to see resources allocated to the community for the youth and money put into the community toward revitalization and improvement. She called for the formation of a community relations group from which city officials could get input from citizens.
She also doesn’t feel Mayor Paul Woodson is serious in his approach to the West End community.
Anthony Smith said he understood where the mayor was coming from and he felt it was sincere, but felt he monopolized the time that should’ve gone to the residents.
Smith said he didn’t come to the meeting with any preconceived ideas about what would take place.
“I tried not to have any expectations,” he said following the meeting.
He called the meeting a good faith effort and a good first step. He also believes community leaders should’ve been heard and city council and the police department should’ve listened more than they talked.
Woodson said this meeting was designed for the police chief and his officers to speak about what they’ve been doing to combat crime in the West End. He mentioned a meeting requested by Scott Teamer, president of the Rowan chapter of the NAACP. Teamer asked for a sit down with elected officials and the police. Woodson said that meeting will still take place, but did not give a date. Woodson publicly thanked Collins and his officers for their hard work. Teamer later said he was merely at the meeting to support the West End community and just to listen to what was being said. He had no further comment.
West End resident Carolyn Rice asked for more time to speak about the issues of the community.
“Three minutes may not be sufficient to address the council,” she said.
A week ago City Council made some new rules when residents speak during public comment including giving each person three minutes to speak.
Rice’s home was struck in drive-by gunfire recently and a bullet was lodged in her grandchildren’s bedroom, mere feet from where they slept.
Rice said the elected officials gave them plenty of time to vote for them, but asked “why can’t we have equal amount of time?”
She was of the understanding that residents would be able to speak openly. Rice said she’s proud of Collins and has seen a change in her neighborhood.