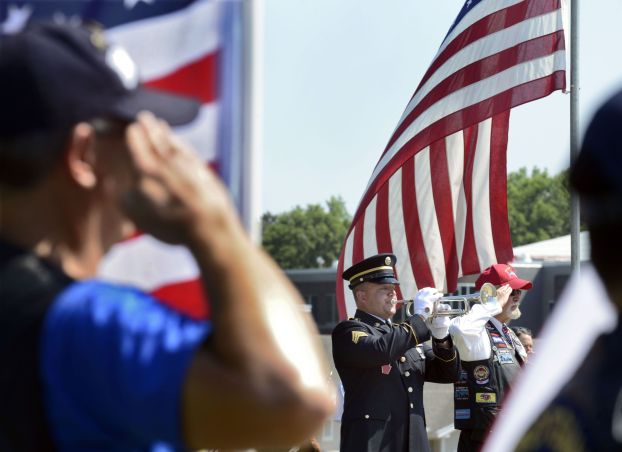 SALISBURY — Families gathered at the Salisbury National Cemetery Monday under picture-perfect skies to pay tribute to those who died far from home and family.
As music played and veterans greeted one another, Susan Jolie, of Clemmons, stood by her husband’s grave.
Arthur R. Jolie, Jr. was not killed in action. He served overseas briefly during Desert Storm, she said.
But on this day, Jolie said, she thinks about her late husband — “what it would be like if he were here now. We have two children, two girls, and we always brought them to Memorial Day.”
It’s important, Jolie said, for children to know the importance of the sacrifices made by those who serve, and those whose families have to say goodbye.
Several hundred gathered at the outdoor shelter, under waving ?ags, for Monday morning’s tribute.
With Patriot Guard riders standing sentinel around the audience, holding U.S. flags, cemetery director Don Owens reminded the audience of the reason for Memorial Day.
“With deep respect and gratitude … on this day we bear witness, paying tribute and respect to our heroes,” Owens said. “They have given so much to bring greater safety and security to our country and to so many other places around the world.”
Kaye Green, director of the Hefner VA Medical Center, said Memorial Day “is about honoring those men and women who fell in the act of defending this country,” and that Americans must never forget their sacrifices.
“I was originally going to comment on some of the negative publicity surrounding the VA at this point in time … but I changed my mind,” Green told the audience, saying she did not want to take away from the meaning of the day’s events.
Mayor Pro Tem Maggie Blackwell read a proclamation from Mayor Paul Woodson and the Salisbury City Council, paying tribute to those “who have given their uttermost” in the defense of freedom.
In addition to those who died in combat, many are speaking out about the rising tide of military servicemembers who commit suicide after returning home.
In his keynote address, Tom Harrell, former owner of radio station WSTP in Salisbury, talked of his work with veterans, and the need for all Americans to be aware of the problems they face.
“You know, we have faced an epidemic of suicides among veterans,” Harrell said, and went on to quote statistics saying that 349 servicemembers committed suicide in the first weeks of this year.
“Last year, the number exceeded 1,950 … more than double the suicide rate in the population as a whole,” Harrell said.
Harrell said that meeting veterans at a coffee shop several years ago led him to start an outreach here in Salisbury, at Thelma’s restaurant in the former Salisbury Mall, now called West End Plaza.
Each Tuesday, Harrell said, veterans gather for coffee and doughnuts. It’s not psychotherapy, Harrell said, but “coffee therapy” – a human contact that helps veterans work through their struggles and find healing.
“We know there are about two and a quarter million veterans who served in Iraq and Afghanistan,” Harrell said. He challenged those present to reach out to veterans and support them, while never forgetting the sacrifices made by those who fell.
Contact Hugh Fisher via the editor’s desk at 704-797-4244.