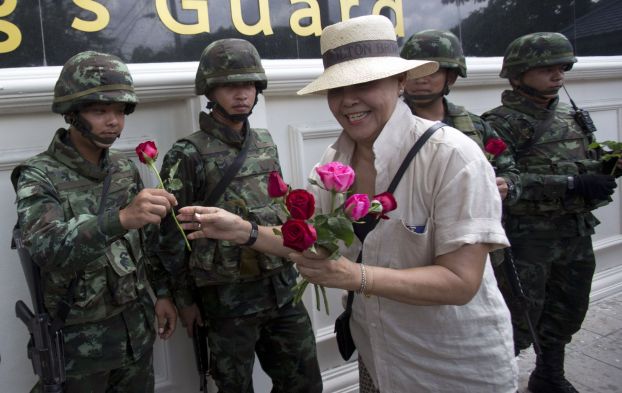 Your daily look at late-breaking news, upcoming events and the stories that will be talked about today:
1. EXPERTS: SATELLITE DATA RELEASE DOES LITTLE TO CONFIRM MH370 FLIGHT PATH
As families continue to live in anguish, pages of information released by the Malaysian government aren’t seen as conclusive evidence that the plane crashed in the southern Indian Ocean.
2. POPE PLEDGES “ZERO TOLERANCE” FOR CHILD MOLESTATION
His plan to meet with sex abuse victims at the Vatican draws ire from a U.S. group which calls it a “public relations coup.”
3. UKRAINE’S PRESIDENT-ELECT VOWS INSURGENCY END
Petro Poroshenko describes pro-Russian separatists as “Somali pirates,” while authorities in Kiev reportedly kill 30 rebel fighters who occupied a major eastern airport.
4. FLAWED CALIFORNIA WATER SYSTEM THWARTS EFFECTIVE DISTRIBUTION
The state, which is facing a third year of draught, is incapable of accurately tracking how much 4,000 companies and farms are consuming.
5. THAI COUP DETERS TOURISTS
Bangkok’s tourism industry is feeling the pinch: one luxury hotel received more than 500 cancellations since the putsch was declared and is expecting many more.
6. ABDUCTED GIRLS LOCATED, NIGERIAN DEFENSE CHIEF SAYS
But he said he fears that using force to try to free the nearly 300 schoolgirls kidnapped by terrorists could further endanger their lives.
7. WHO WILL RESPOND TO SCHOOL MEAL CRITICS
First lady Michelle Obama is answering Republicans, who want to roll back healthier standards, by holding a White House event to highlight the success of the healthier guidelines.
8. WHICH NEW OBAMACARE CONCERN VEXES STATES
Coast to coast, states are facing threats that their Medicaid costs will rise due to the federal health care law.
9. TEEN MOTORIST HOLDING HIS BREATH CAUSES TUNNEL CRASH
The 19-year-old driver fainted as he drove through Highway 26 in Oregon, causing a three-car accident.
10. HOW THE BOX OFFICE FARED THIS HOLIDAY WEEKEND
“X-Men: Days of Future Past” had the fifth best Memorial Day opening ever with ticket sales topping $111 million.