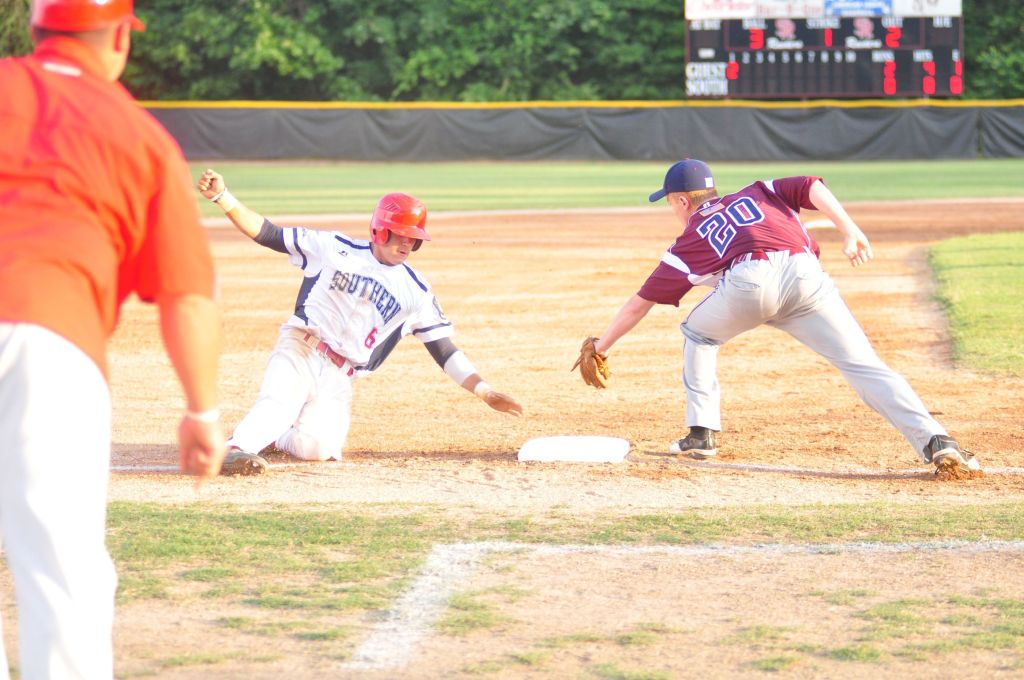 LANDIS — If Southern Rowan had just one problem Monday night, it’s name would be Trace Hagler.
But SR had to more to worry about than the Kannapolis right-hander who baffled them for six shutout innings in a 7-1 non-league victory.
“We’ve just got to get more runners around the bases,” centerfielder Ben Gragg said. “Plain and simple. Get ‘em on and get ‘em over. That’s how you score runs.”
Southern (2-1) didn’t need a lesson in how-it’s-done, but it could have used better timing and more patience at the plate. Hagler — an A.L. Brown senior headed for UNC-Pembroke in August — was a master moundsman. His fastball and slider danced around SR’s bats and his sweeping curve had the hosts waving at pitches bathed in dirt and just off the plate.
“Everything was working tonight,” Hagler said after yielding two hits and notching 11 strikeouts. “And my catcher (Ryan Austin) did a great job keeping everything in front of him. South is a good-hitting team so we had to locate and keep them guessing all the time. I never threw the same pitch twice in a row.”
Southern starter Andrew Fulton had his own problems. Things went wrong in a hurry for the cagey lefthander. By the time he threw his 10th pitch Kannapolis (5-3) had a 2-0 lead, courtesy of the belt-high fastball C.J. White barbecued over the left-field fence.
“When he left the ball up, they hammered it,” said SR catcher Matt Honeycutt. Added Gragg: “When he left it up, those were the only times he got hurt.”
Fulton surrendered two more runs in the top of the second inning. It began when Adam Rivers turned a one-out single into a hustle-double. Then after recording a second out, Fulton allowed Austin’s RBI-single to left field and Josh Macek’s run-scoring double to the gap in right-center.
“We wanted to see what Fulton could do,” said Southern coach Ben Hampton. “We wanted to see what kind of distance and stamina he could us. We’re still waiting on the three Carson starters, but with playoffs last week they’re all limited.”
That bodes well for the league season, still two weeks away, but didn’t help last night. Fulton allowed six hits, four for extra bases, and walked three in 2 1/3 innings. Dylan Snider relieved and fared better — yielding two earned runs and six hits in 5 2/3. A bright spot was Owen White, a promising eighth-grader from West Middle School, who hurled a perfect ninth inning.
Southern trailed 5-0 by the time it broke through against reliever Josh Hall in the last of the seventh. Bo Corriher crunched a leadoff double off the fence in the left-center and moved to third on an infield error. He came home on a Hunter Travis groundout.
“We hit the ball hard,” said Gragg, who reached scoring position three times but never scored. “We’ve got the sticks. We just have to find the holes.”
•