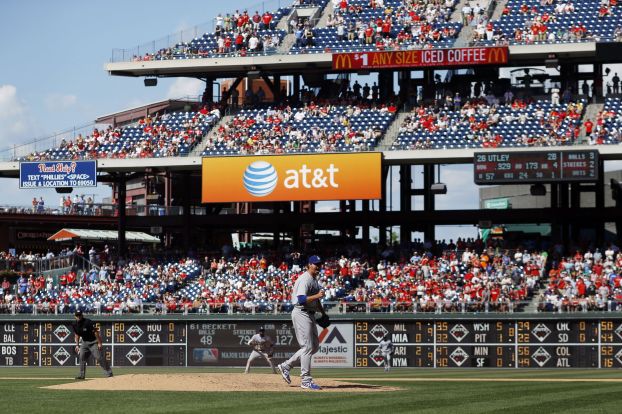 PHILADELPHIA — Josh Beckett pitched the first no-hitter of his decorated career and the first in the majors this season, leading the Los Angeles Dodgers over the Philadelphia Phillies 6-0 on Sunday.
Beckett struck out six, walked three and didn’t come close to allowing a hit against a lineup that included two former NL MVPs and four former All-Stars.
The 34-year-old right-hander, who needed surgery last year after a nerve condition left him unable to feel his fingertips, threw 128 pitches. He fanned Chase Utley on a called strike three to end the game.
Beckett (3-1) pitched the Dodgers’ first no-hitter since Hideo Nomo beat Colorado at Coors Field in 1996, and the 21st in franchise history. Sandy Koufax threw four.
It was first no-hitter in the majors since Miami’s Henderson Alvarez did it against Detroit on the final day of the 2013 season.
Beckett became the first visiting pitcher to throw a no-hitter in Philadelphia since Montreal’s Bill Stoneman in 1969 at Connie Mack Stadium.
A three-time All-Star, Beckett was the MVP of the 2003 World Series.
A.J. Burnett (3-4) lost in a matchup against his former Marlins teammate.
BRAVES 7, ROCKIES 0
ATLANTA (AP) — Evan Gattis homered twice to support Julio Teheran’s six scoreless innings and the Atlanta Braves beat Colorado.
Justin Upton and Chris Johnson added two-run homers for the NL East-leading Braves, who have won six of eight.
Rockies shortstop Troy Tulowitzki left in the eighth and appeared to slightly limp as he walked off the field. He said he hit his left foot on a backswing, but said he thought he was OK.
Teheran (4-3) lowered his ERA to 1.77. He gave up four hits and struck out six.
Franklin Morales (3-4) was chased in the fifth.
BREWERS 7, MARLINS 1
MIAMI (AP) — Jimmy Nelson pitched 5 2-3 scoreless innings in his season debut for the Milwaukee Brewers in a win over Miami.
The Brewers’ top prospect was recalled from Double-A Huntsville to start for Yovani Gallardo, who is nursing a sore left ankle.
Nelson (1-0) allowed five hits and three walks, but Miami went 0 for 7 against him with runners in scoring position.
Ryan Braun had four hits, including a double and a triple for the Brewers. Jonathan Lucroy had two doubles and a triple, and Khris Davis doubled twice.
Randy Wolf (0-1) made his first start since September 2012. The 37-year-old lefty, trying to come back from the second Tommy John surgery of his career, gave up nine hits and six runs in five innings.
NATIONALS 5, PIRATES 2
PITTSBURGH (AP) — Ian Desmond hit a pair of RBI singles and the Washington Nationals ended a four-game losing streak by beating Pittsburgh.
The Pirates had four in a row.
Doug Fister (2-1) allowed one run and six hits in 5 1-3 innings with four strikeouts and no walks. Rafael Soriano pitched a perfect ninth for his 11th save.
Francisco Liriano (0-5) is winless in 14 consecutive regular-season starts, dating to last Sept. 10.
PADRES 4, CUBS 3
SAN DIEGO (AP) — Ian Kennedy pitched six strong innings and the San Diego Padres defeated the Chicago Cubs.
Kennedy (3-6) allowed one run and two hits. Huston Street got his 14th save in as many chances despite giving up a two-run homer to Starlin Castro in the ninth inning.
The Cubs, who had four hits, were trying to win their first series since Sept. 9-11 in Cincinnati.
Jason Hammel (5-3) held the Padres hitless until the fifth.
DIAMONDBACKS 2, METS 1, 1ST GAME
METS 4, DIAMONDBACKS 2, 2ND GAME
NEW YORK (AP) — Daisuke Matsuzaka pitched six solid innings in his first start of the season and helped out with an RBI single as the New York Mets salvaged a doubleheader split with Arizona.
Bobby Abreu added a run-scoring double in a rare chance to play.
The 33-year-old Matsuzaka (2-0) had been relieving for the Mets. Jenrry Mejia pitched the ninth for his third save after getting the loss in the first game.
Zeke Spruill (0-1) lost after being promoted from Triple-A before the game.
In the opener, the Diamondbacks turned a season-high five double plays. They used an error by second baseman Daniel Murphy in the ninth to win.
Evan Marshall (2-0) won in relief and Addison Reed got his 14th save. Mejia (4-1) took the loss.
GIANTS 8, TWINS 1
SAN FRANCISCO (AP) — Michael Morse doubled three times and drove in four runs, Madison Bumgarner stayed unbeaten in May and the San Francisco Giants beat Minnesota to complete a three-game sweep.
Hunter Pence homered as the Giants improved to 6-0 in interleague games this year. They have the best record in the majors.
Bumgarner (6-3) earned his fourth straight win, striking out 10 and giving up three hits in seven innings. He fanned Joe Mauer three times.
Nolasco (2-5) allowed nine hits over 4 2-3 innings.
CARDINALS 4, REDS 0
CINCINNATI (AP) — Adam Wainwright became the National League’s first eight-game winner by dominating Cincinnati again, and the St. Louis Cardinals pulled away to a victory that completed another successful series against their division rival.
The Cardinals are 6-3 against the Reds this season. They’ve won 10 of their last 11 series together.
Wainwright (8-2) gave up five hits in eight innings and matched his career high with 12 strikeouts.
Tony Cruz and Kolten Wong each had a pair of singles and drove in a run off Mike Leake (2-4). Wong also stole a pair of bases.