VW bus is an attention-getter 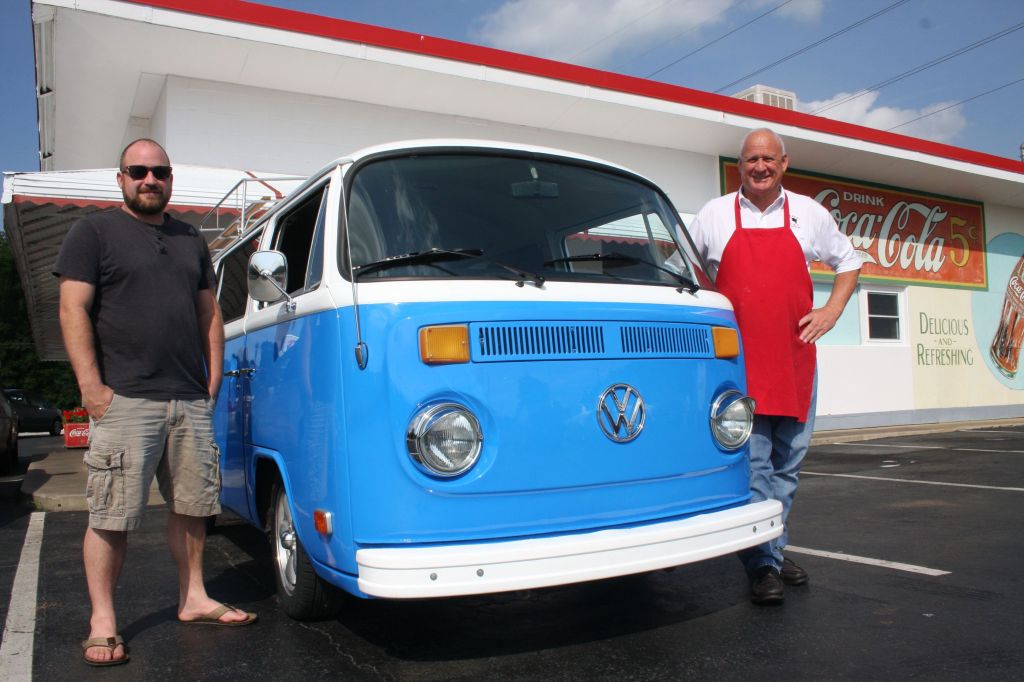 CHINA GROVE — What’s shiny, blue and white, and has eight windows?
A 1974 Bay Window Volkswagen Bus. Most afternoons, you’ll find it parked at Gary’s Barbecue where its owner, Alan Ritchie, works six afternoons a week.
“There’s a lot of different kinds of VW buses,” says Alan’s dad, Gary, who has passed along his love of vehicles. “People really like ’em.”
There are several buses in the area of different years and models, but this one may be the most visible.
Alan bought the bus in October, and is in the process of finishing up its restoration.
“It was pretty much restored,” he says, “but the inside needed some touching up.”
Alan has purchased a new rear seat and is having it reupholstered. Altogether, the bus will seat seven. He and his dad were hoping to purchase a 1967 bus, but the owner couldn’t let it go, Gary says. “They are more desirable.”
Alan purchased the vehicle from an owner in Mooresville.
“He’s having fun with it,” Gary says.
A peek inside shows the van is basic transportation. There’s heat and a vent, but no air conditioning. It’s a four-speed, manual shift.
“It’s got an air-cooled engine, with the motor in the back,” Gary says. “They’re pretty easy to work on because they have no radiator.”
Gary pops the hatch to reveal a 4-cylinder engine.
Alan, 34, has worked at Gary’s for half his life. Being around the restaurant’s old advertising memorabilia has rubbed off on him.
“We just like old stuff,” Alan says. “Being around this stuff my whole life, I’ve picked up on it.”
Alan has the bus, as well as a 1948 GMC truck, which also gets a lot of attention when he drives it to work.
“You really can’t write about it unless you ride in it,” Alan points out, so off we go.
It’s a smooth ride, not a fast one. Alan says the vehicle’s top speed is about 55. He gets 25-30 mph, and his mileage is actually better in town, because it takes more gas to sustain high RPMs. Because the seats are being reupholstered, the seat belts are out at the moment, making the ride seem even more thrilling with just a hint of danger.
Alan says he enjoys his work as a carhop.
“It’s a good way to make money every day,” he says. “I have Sundays off, and my mornings free. And I can always get off if I need to. I don’t mind it. You get to have a good time and interact with people.”
Alan and his wife Brittany, a blogger for Babykins magazine, have two sons, Cash, 7, and Crew, 5. The boys seem to have inherited their daddy’s and granddaddy’s love of vehicles.
Gary teased Alan that he’d have to buy a minivan because he has children.
“I’ll drive a hearse before I drive a minivan,” Alan says.
So he told his dad he’d buy a van and came home with the VW bus.
Alan admits his boss may be a tad harder on him than the other employees, but not much.
“With any relationship, it’s hard sometimes,” Alan says. “But for the most part, he’s good to me. I don’t have any complaints. You can’t argue with him because he’s been a success.”
Away from work, Alan enjoys snow skiing and golf, and spending time with his family, and of course, his vehicles.
This spring, Alan and Gary have been to VW shows in Badin and Farmington.
As a matter of fact, Alan is toying with the idea of hosting a car show sometime this summer at the restaurant. Having it on a Sunday would mean there’d be plenty of parking at Gary’s and Jimmie’s Restaurant next door.
“It’d be neat,” he says, thinking. “We could open it up and have a car show with VWs and bugs, and classic cars and hot rods. You’d really have a good turnout.”
I suggest that they could sell barbecue sandwiches and Cheerwine. Alan thinks that’s a great idea, decides that banana pudding should also be served, and says he’ll talk to his dad about it.
So … whaddaya think, Gary?
Freelance writer Susan Shinn lives in Salisbury.

Poetic justice: A soldier’s thoughts put on paper one…