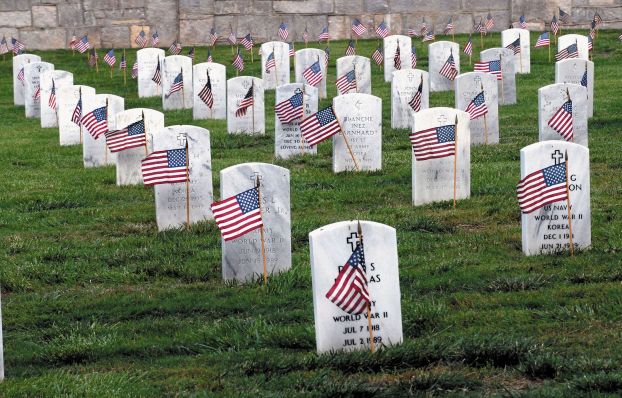 Memorial Day 2014 stands in strange juxtaposition to the growing scandal within the veterans’ health care system. We honor the memory of those who lost their lives for our country even as we struggle to deliver health care to those who survived.
For Salisbury, this is personal. The VA is not some distant entity; we have the Hefner VA Medical Center right here in town. The people who work there and their patients are our neighbors and friends.
We also have a National Cemetery. I can’t think of Memorial Day without thinking of the sea of white headstones at the cemetery. Lined up so precisely, row after row, they bear silent witness to the price of war.
Even their uniformity sends a message. However big or small a person seems in life, in the end we are all the same. Ashes to ashes.

As for our veterans, providing health care for them involves a giant network of hospitals and clinics — and more bureaucracy than I can wrap my head around.
It is so massive that a deceptively simple standard — appointments made within 14 days of a request — led in some places to secret lists and outright lies. What started as the report of deaths due to delays at a Phoenix hospital is now bleeding out across the entire VA system.
Whenever the misdeeds of a few — or even many — bring condemnation to a larger group, a lot of good people get hurt. It’s hard to fix an institutional problem without making some blameless people feel their reputation has been tainted, too. So there’s a double tragedy here — for the veterans who did not get prompt care and for VA employees who are going by the book or better.
Curious how all this was panning out at the Hefner VA Medical Center, I requested an interview with Director Kaye Green. That did not work out. The statement Green sent out in place of the interview said the audit team that visited the Hefner VAMC had “voiced no major concerns about scheduling.”
That’s so far. We won’t have an official report until August.

The way to draw out critics of an organization, I have since realized, is to suggest everything is OK. A handful of calls and emails came in after the Post published Green’s statement, but most critics declined to go on the record.
They did not talk of secret lists or people dying while waiting for an appointment. What I heard most consistently is satisfaction with care and frustration with process. Getting past the phone system and intermediaries in order to talk to or see a doctor is not a simple thing.
Getting an MRI seems to be particularly difficult. One person wound up going to a private doctor rather than wait, and the subsequent MRI found a significant problem. But the veteran didn’t want to complain. He still goes to the VA.
Then there’s Chuck Hughes, a former VA employee who doesn’t mind going on the record with criticism. He says he learned to speak his mind as a submarine sailor. Retired and now serving on the school board, Hughes gets all his medical care at the VA.
“This is a good VA. We give good care here,” Hughes said.
But patients used to be able book next appointments as they were leaving the VA doctor’s office, Hughes said. Now there’s a policy of “make an appointment to make an appointment,” as he called it. Letters go out telling veterans when they can call back to make an appointment, he said.
The problem as Hughes sees it is insufficient staff for the growing number of veterans turning to the VA for care. He blames Gen. Eric Shinseki, secretary of Veterans Affairs and “probably an honorable man,” for not getting more funding from Congress.

The Salisbury VA System includes the Hefner VAMC and outpatient clinics in Hickory, Charlotte and Winston-Salem, a region of 287,000 veterans. In fiscal year 2013, the system treated more than 90,000 individuals and had more than 780,000 outpatient visits.
Director Green said she has told her staff “we will never sacrifice our integrity for the sake of a measurement or anything else. …
“If we make a mistake, we will admit it and correct it as quickly as humanly possible.”
In 2013, after learning that two nurses improperly re-used insulin pens — discovered in another systemwide audit — Green shared that finding and announced that 205 former inpatients were being tested for infection.
That was minor compared to this year’s controversy, but Green sounds resolute.
“I stand committed with our staff to providing the best care possible to all veterans who choose to come here for care,” she said in her statement.
We stand with you, Director Green. That’s what we all want — honesty, openness and the best care possible for our veterans.
Elizabeth Cook is editor of the Salisbury Post.

I want to thank the person or persons responsible for approving the much needed traffic lights being installed at the... read more