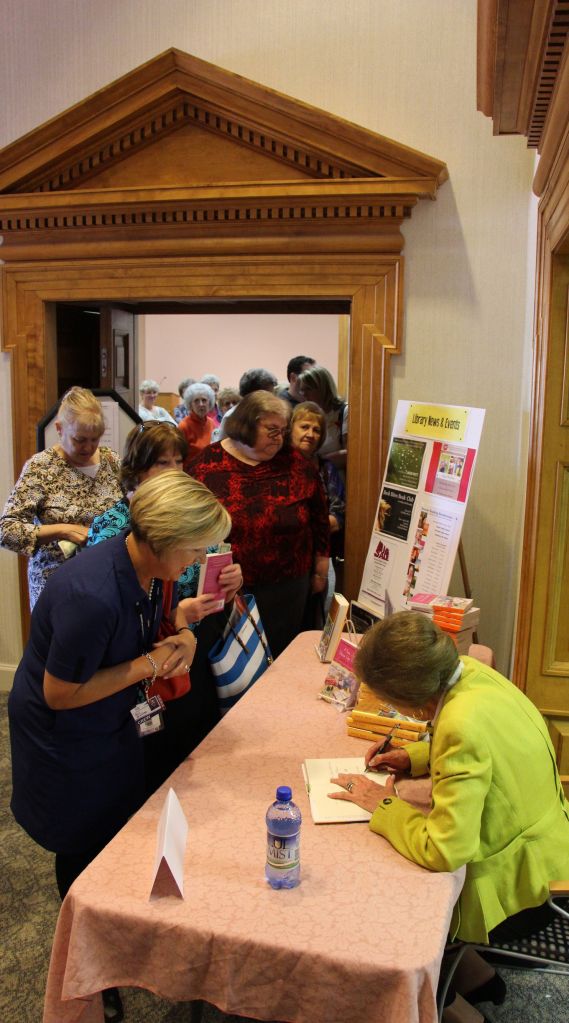 SALISBURY — If you enjoyed this spring’s Rowan Reading Rendezvous, sponsored by the Friends of Rowan Public Library, start planning to come back for more.
The Friends liked it, the visitors liked it, the authors liked it, and the Friends made a little money for the library.
“We are planning to have a Rowan Reading Rendezvous II,” said Dale Basinger, president of the Friends. “The board of the Friends gave its approval May 5 to go ahead. Deal (Safrit) is enthusiastic and already thinking about authors for next year.”
They will likely change the date of the Rendezvous to closer to Catawba College’s Brady Authors Symposium. John Hart is the scheduled speaker at Catawba. Safrit thinks maybe the following Saturday would be a good time, with people still in a bookish mood.
Safrit likes sticking to North and South Carolina authors, if he can, and will look for people who have recent books.
“I may bring a nonfiction author or two in,” Safrit said, to attract more men to the event. “There were a number of people we invited who couldn’t come, so we’ll try to invite them again for next year, especially if they have new books. Safrit would like to get short story writer Marjorie Hudson next year, for example. Her collection, “Accidental Birds of the Carolinas” has earned a following.
Thirteen authors came to the first Rendezvous. Jason Mott, author of “The Returned,” which became the TV series “Resurrection,” came on the Monday after the event because he was double-booked for that Saturday.
Safrit wants to invite extra authors to make up for the inevitable last-minute cancellations.
Little details like where to locate authors will be tweaked. They were in the hallway between the Hurley Room and Stanback Room, and down the hall that leads to the library, but no one could enter that hallway from the library. They had to go out and go around to another door. Safrit hopes to improve on that.
And he wants to improve on the publicity by creating a Facebook page and finding different venues to get the word out, such as more signs around town.
Basinger says the Friends lost some money by allowing people to bring books from home to be signed. He and Safrit agree that won’t happen in 2015. “We have to be firm. This is a fundraiser,” Safrit pointed out. If you want your book signed, you have to buy it at the event.
Basinger also wants all the books for sale to be in one place, so people can do their buying and then get the books signed. Several authors made this suggestion, including Ed Southern, who thinks some people picked up his book, “Parlous Angels” and never discovered where to pay for it.
Basinger said the committee was happy to meet authors they had not previously known about. He, like others, bought a book from every author. “I have read some of them. I’m reading John Buchan’s novel now. It’s very enjoyable. I was just surprised by how well written these books were; the authors were not well known but first rate. There are more out there like them and we want to know them.”
Safrit asked for comments from the authors who came and almost all responded.
Walter Bennett said, “I suppose that the more presenters there are, the more people will attend, and that will be to the benefit of everyone.”
Wayne Caldwell, author of “Cataloochee” and “Requiem by Fire,” said it was better than the last six events he’d done, combined. Newer and lesser known authors like Valerie Nieman and Ariel Djanikian were thrilled for a chance to meet readers and other authors. “It was such an honor to be part of that great event,” Djanikian wrote. Lesser-known authors were thrilled to have a chance to bring their work to a new audience, and to spend time with other authors.
Several suggested reworking author talks, as some overlapped. Safrit said he will organize the times better for 2015. “One thing we will not do is, if we have a big name author, we will not schedule anyone else speaking at the same time.”
Miss Julia series author Ann B. Ross drew a crowd.
Buchan, a lawyer from Charlotte, and former journalist, suggested every author have someone do an introduction before speaking.
Tony Abbott, who has appeared at numerous events all over the state, said “We need to work on getting more people there.”

If you have a suggestion of a North or South Carolina (or nearby state), send an email to dp1@salisburypost.com, with the subject line Rowan Reading Rendezvous. Thanks to Friends board member Sammie Hinshaw who came up with the memorable name for the event.

5 things to do this weekend