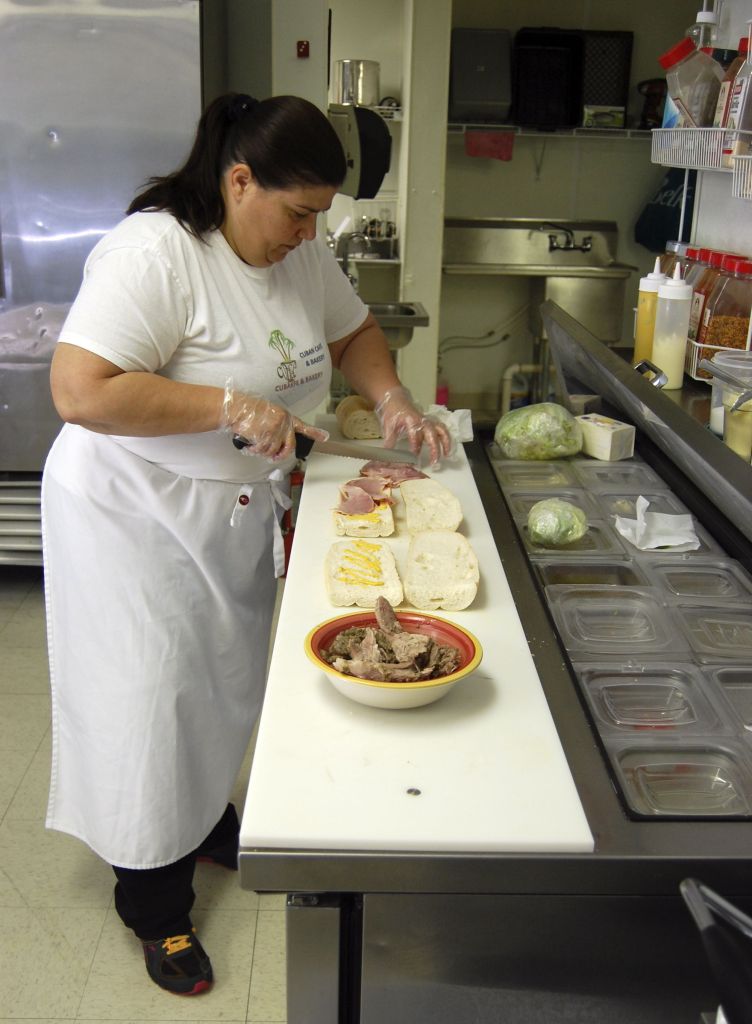 GRANITE QUARRY — A little piece of Miami has landed in Granite Quarry.
Tucked into a strip mall between Subway and a Chinese restaurant, the unique new Cubakfe Cuban Cafe and Bakery at 312 N. Salisbury GQ Ave. offers a taste of Havana to local diners seeking new flavors and Cubans and Miamians looking for a reminder of home.
Cubakfe opened March 24 and received such a warm welcome from enthusiastic patrons that a week later, co-owner Frank Trujillo quit his job at Lowe’s to join wife Mabel Jacome at the restaurant full-time. Trained at Le Cordon Bleu culinary school in Miami, Jacome is the chef. Trujillo, who is self-taught and worked as an apprentice at a bakery, does the baking.
The menu offers standard Cuban fare like media noche (pork, ham, swiss cheese, pickles, mayo and mustard on sweet Cuban bread) and pan con tortilla (omelet sandwich), as well as delicacies including tres leches (cake with three milks) and cappuchino (little yellow cone-shaped cakes drenched in syrup). Breakfast is served all day.
Cubakfe joins Mambo Grill in Salisbury as the only Cuban restaurants in Rowan County.
Before they opened the cafe, Jacome and Trujillo had never run a restaurant. They made their living in Miami with their feet, the owners and operators of a dance school that offered lessons in a variety of Latin dance styles for all ages, from children to seniors.
But the couple’s dancing days ended when they converted to Christianity and determined that song lyrics and other aspects of the dance industry conflicted with their new beliefs.
The couple gave up their business and hectic Miami lifestyle and took a leap of faith, moving to Rowan County three years ago after Jacome visited a friend here and fell in love with the area.
“We wanted to raise our children in a more old-fashioned American style of living,” Jacome said. “We couldn’t get that in Miami. We have a very strong Christian faith, and I wanted to raise my children in that environment.”
Jacome home schools daughter Karina, 15, and son Diego, 6, who have a school room set up in the back of the restaurant. Daughter Natalie, 20, attends Rowan-Cabarrus Community College.
When Karina and Natalie aren’t studying, they help at the restaurant, which has no staff.
Jacome, who moved to Miami from Cuba when she was 10, and Trujillo, originally from Honduras, are American citizens. Other than financing a few pieces of equipment, they paid cash for nearly everything in the restaurant and did many of the renovations themselves.
“We have sacrificed a lot to open this restaurant,” Jacome said.
Formerly a pizza joint, the restaurant features bright walls in Miami colors — yellow and red — with a copper-topped counter over stone. The couple took down a wall and added a second bathroom.
“People say it’s like stepping into a little restaurant in Miami,” Jacome said.
The kitchen, which has ovens, roasters, hot plates and a panini press, is not fully appointed. But Jacome has plans to change that.
“Toward the end of the year, God willing, we plan to expand the kitchen to add a hood and expand the menu to include more Cuban specialties,” she said. “We would also like to be open six days a week.”
Currently, Cubakfe is open from 9 a.m. to 6 p.m. Tuesday through Friday and 7 a.m. to 7 p.m. Saturday.
Opening the restaurant took all of the family’s resources, and they were moving out of their home in Granite Quarry a few months ago to save money when Karren and Brian Campbell drove by. The Campbells knew the Jacome and Trujillo family as fellow members of Faith Baptist Church.
The older couple stopped to inquire about the move. When Jacome explained her family could no longer afford their home and were downsizing to a small apartment, Karren Campbell immediately offered her daughter’s vacant three-bedroom, two-bathroom home in Faith.
Jacome declined, saying they could never afford the rent for such a home. The Campbells asked what the family could afford and set the rent at that amount.
Since then, the Campbells and Cubans have become almost inseparable.
“They are like our American parents,” Jacome said.
The Campbells love Cuban food and said they never realized how many Cubans live in the area. Cuba and Miami natives have come from as far away as Albemarle and Greensboro to eat at Cubakfe. Brian Campbell has been to Cuba repeatedly with N.C. Baptist Men and is preparing for his fourth mission trip to the island next month.
Jacome said she and her husband decided to turn their lives over to God.
“If you are going to believe in God, you have to believe the way he wants you to,” she said. “This is not faith Frank Sinatra style, ‘My Way.’”
Cubakfe will have a grand opening celebration Friday and Saturday with free samples and giveaways every two hours of meals, coffee drinks and more.
Contact reporter Emily Ford at 704-797-4264.