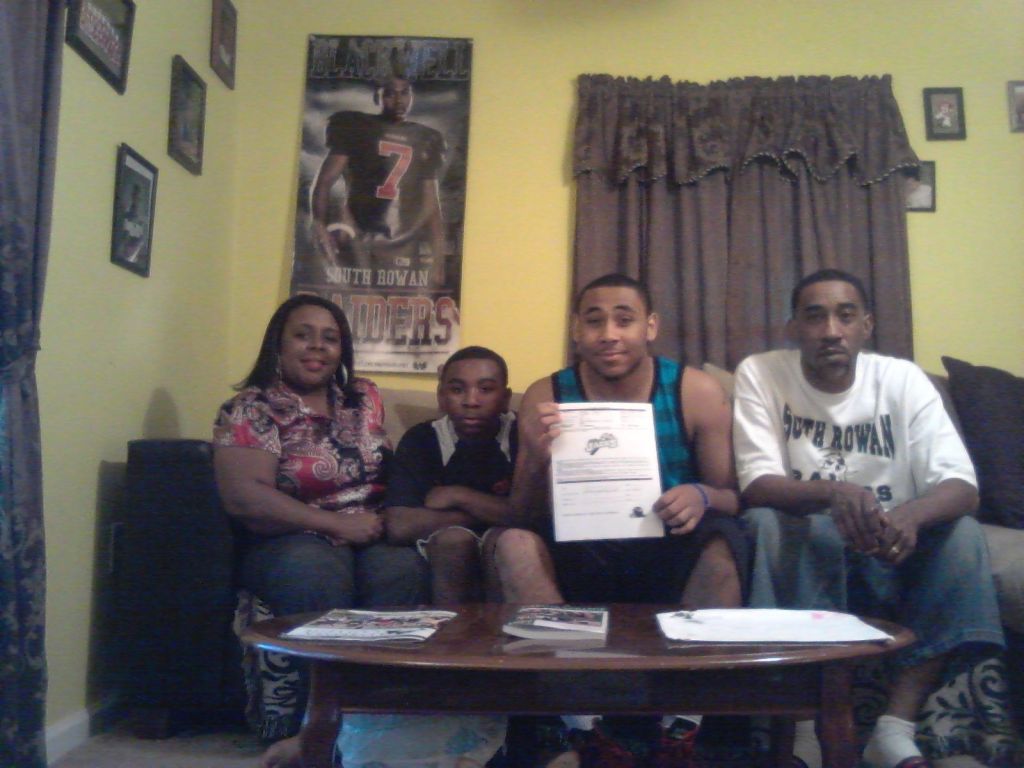 LANDIS — South Rowan running back Derrick Blackwell is headed to a place he didn’t know existed not long ago — and to a place you’ve never heard of.
Still, it’s a chance to keep playing football and a chance to build on his education, and those are the two things that matter most to Derrick Blackwell right now.
“I’m just happy to have the opportunity,” Blackwell said. “I’ve still got dreams. I realize that sometimes the road to get to those dreams takes a little bit longer, but that’s OK.”
Blackwell has signed with Dakota College at Bottineau.
That’s a mouthful of a junior college in North Dakota. They are the Lumberbacks. They wear green. They’ll play an 11-game schedule this fall starting with a home game against Minnesota West Community and Technical College.
“Derrick has some drive,” South coach Jason Rollins said. “This is a chance for him to continue playing a sport he’s good at and it’s an opportunity for him to keep growing. I think he’s going to find that person that he wants to be — and maybe he’ll become great.”
The Lumberjacks went 8-3 last season and went to a bowl game, although probably you’ve never heard of the Salt City Bowl in Hutchinson, Kansas.
Blackwell, a cousin of former North Rowan football and track star Greg Yeldell, is a good player.
When Blackwell was playing for Salisbury in 2012, he made a contribution as a fullback in important games. He rushed 38 times for 155 yards and two TDs. He scored a touchdown in the second round of the 2A playoffs and he had eight carries for 32 yards in the Western Regional final loss to South Iredell.
As a senior at South, Blackwell accounted for 54 percent of the Raiders’ rushing yardage. He caried 176 times for 716 yards and seven TDs and he also caught a scoring pass against Concord.
“He was a great asset,” Rollins said. “He started realizing some of the things he can do and he progressed throughout the season as far as being a heads-up team player.”
Blackwell did something that’s been done only twice in the 54-year history of the program. He scored five touchdowns — in a single night.
Not only that, he did it running the ball for a team that would finish 0-11. His big night came in South’s sixth game, a home contest with Cox Mill that the Raiders lost 45-36.
“Everyone had their assignments down that week and we were ready to play,” Blackwell said. “I remember scoring on a sweep, but mostly it was zone plays. It was a group effort with great blocking. Sure, it was a tough season, but I was playing with friends. I always felt at home.”
Blackwell’s scoring runs were 2, 17, 10, 1 and 5 yards. He rushed for 190 yards on a whopping 37 carries, as South found something that worked and stayed with it. He also caught two passes for 25 yards.
“I did get some calls after that game,” the 5-foot-9, 185-pound Blackwell said. “From colleges in Virginia, South Carolina and New York.”
He visited Ferrum College in Virginia and had an offer but decided not to commit.
Then Blackwell came across Dakota College at Bottineau online.
“We sent them all my athletic info and then we started communicating,” Blackwell said. “I haven’t been up there yet, but I have taken a virtual tour of campus online and I liked what I saw. My parents feel comfortable with the school and the football program. They were skeptical at first, but they were supportive after talking to the coaches. I think it’s a good fit for me. It’s going to be just school and football, with not a lot of other things going on.”
Blackwell said he is working out daily, “mostly pushups and situps,” in preparation for this fall.
The nicest thing to come out of Blackwell going on to college is that he’s raising the bar for his brother, 13-year-old DeMarcus, a student at China Grove Middle.
“He told me the other night, he’s going to wear No. 7 like me and that he’s going to play college football like me,” Blackwell said. “It’s a good feeling to know I set a standard for him.”