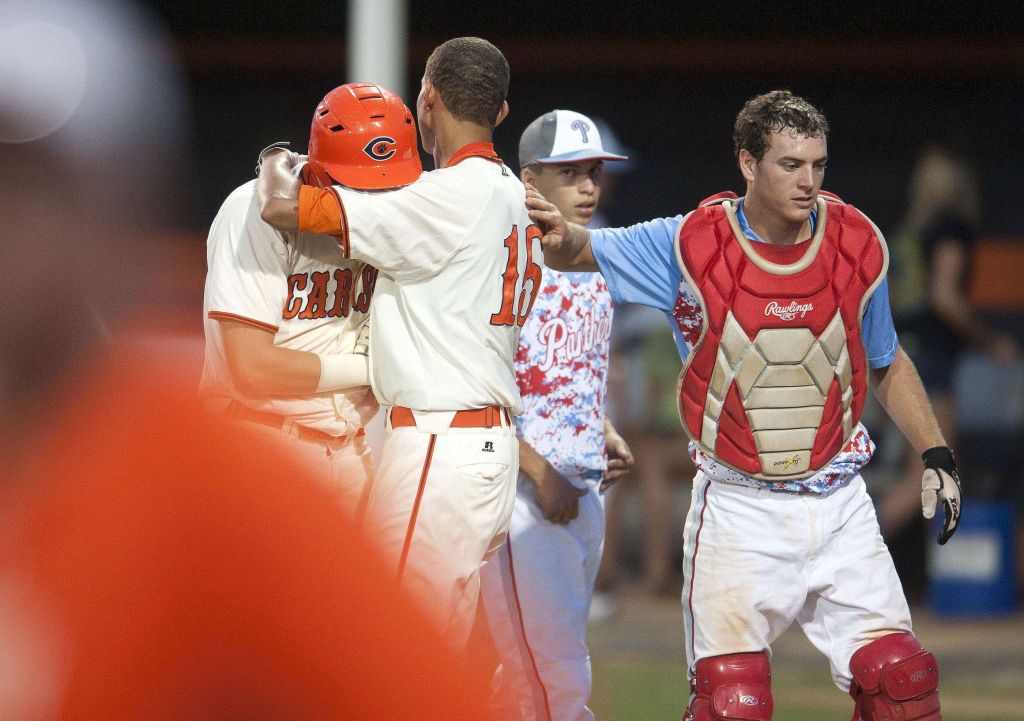 CHINA GROVE — The last swing of Carson’s season was a rocket off the bat of Heath Mitchem that threatened to break Piedmont first baseman Austin Harding’s wrist.
Harding stabbed the ball, dropped his mitt, shook his hand to clear the sting, and then joined the official line for shaking hands.
Carson hit the ball on Friday, hit it often and hit it hard, but the bottom line was a 4-0 Piedmont victory that pushed the Panthers into the Western Regional championship series against Lawndale Burns.
“We struck out just twice and we made no errors,” said Carson assistant Dwayne Fink, shaking his head. “Usually that wins a high school game.”
It didn’t win this one. Piedmont pitcher Corey Sikes (7-2) is small at 5-foot-10 145 pounds, but he’s left-handed, he’s smart, and he’s headed to Western Carolina for a reason. He pitched his second straight shutout — he also blanked Cox Mill in the second round — and his team got him runs whenever it had scoring chances.
John Daugherty (7-3) pitched into the sixth for the Cougars and left with his team down 2-0. Dillon Atwell pitched the Cougars out of a mess in the sixth, but Piedmont nicked him for two runs in the seventh on a two-out knock by Harding and a wild pitch.
“John and Dillon both pitched on short rest and pitched with courage and heart,” Carson head coach Chris Cauble said. “They pitched well enough for us to win.”
Scoring first is huge this time of year, and Piedmont leadoff man Nigel Hester flew around the bases while fans were still searching for seats. Hester opened the game with a single. After a sacrifice, a passed ball and a run-scoring groundout by Harding — Carson shortstop Austin McNeill made a good play in the hole — it was 1-0.
“You give Sikes a lead and he settles in and pitches well,” Piedmont coach Milt Flow said. “He was getting a lot of quick outs with fastballs and changeups. He didn’t have to use his curve much early in the game.”
Sikes settled into a fast-working groove, but the Cougars were hitting some of his fastballs on the barrel. In the second, Colton Laws grounded out sharply to third and Brandon Sloop flied out deep to left. McNeill and Daugherty stroked balls firmly in the third, but had nothing to show for it.
“It reminded me of that game we lost to South Rowan in the Easter tournament championship,” McNeill said. “We hit the crap out of some balls, but they weren’t falling. I know it happens in baseball. It was just a bad time for it to happen tonight.”
A couple of bang-bang calls on the bases went against the Cougars, and gloom started settling in at the packed ballpark. Piedmont made it 2-0 in the fourth when it bunched singles by Charlotte-bound shorstop Hunter Jones, Sikes and Josh Evans.
Carson escaped the fourth with a 9-2 double play, and finally caught a break in the bottom of the fifth when Piedmont made an error. The Cougars had runners on the corners with one out, and had Mitchem and Daugherty, two of their better hitters coming up. The crowd perked up. It got noisy, but Sikes didn’t bend.
“Both of those hitters are guys who are looking to take the ball to the opposite field,” Sikes said. “My thinking was to bust them inside.”
Sikes had the lefty-lefty matchup advantage with Mitchem, and got him to hit a tapper that Sikes was able to field himself. He held the runner at third and got a huge out at first.
“He threw me a curveball — it fooled me a little bit,” Mitchem said.
Then Sikes jammed Daugherty, who grounded weakly to Harding at first to end the threat.
“We made a mistake defensively, but Sikes has a lot of composure,” Flow said. “He just made good pitches and trusted his defense.”
Michael Morrison’s one-out single in the sixth was Carson’s fourth and final hit.
“We didn’t get many hits, but we hit it solid, Mitchem said. “I don’t know that we’ve hit it better all year, but luck wasn’t on our side much tonight. About the only good thing I can say is that at least we went out playing a good baseball game.”
Piedmont (19-8) entered the playoffs as a No. 3 seed but waded through Cox Mill, East Rowan and Carson in a week’s span. Between them, Sikes and David Nash, who beat East, have thrown six straight complete games.
“We got battle-tested from playing Marvin Ridge and Weddington three times each,” Flow said. “Nobody expected us to get as far as we have because we lost a lot from a (2A) state championship team last year, but these guys have started to believe they be pretty good.”
Sikes said chemistry has grown for Piedmont and confidence has built as the team has moved forward.
For the Cougars, it was a tough night. Cauble said goodbye to a lot of seniors who have produced great careers. Carson finished 24-7 and has won 48 times the last two seasons, so it was emotional.
“Seeing that there were no dry eyes, that let me know how much these guys cared,” Cauble said. “They played as a family, they played with heart and they won a lot of games. It’s been a great group.”
The boxcore in in Scoreboard.

Pocket gardens a good way to learn what grows