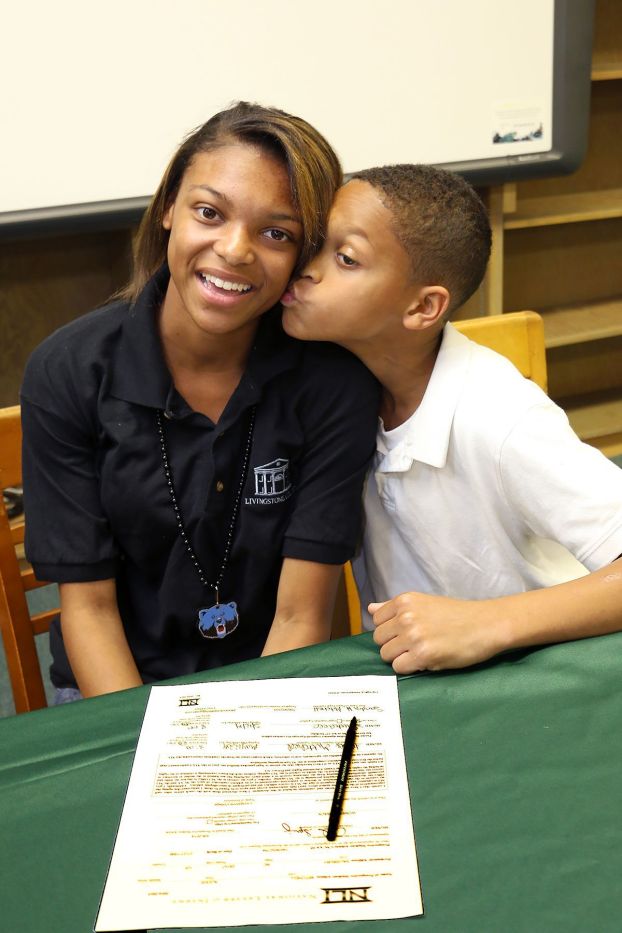 SPENCER — It’s tough being a coach’s kid.
Alexis Mitchell, the daughter of North Rowan state-champion basketball coach and former Catawba player Andrew Mitchell, has gotten an earful before from dad when it comes to the track. But now it’s paid off.
“He coaches me and treats me like his basketball players basically,” Mitchell said. “When I get tired, he tells me I can’t give up. There’s a long speech after every practice and meet.”
Mitchell has gotten over that hurdle and several others since becoming serious about running track. She’s not an elite athlete like her dad, but her persistence to improve gave her a chance to run in college.
At her signing celebration, North football player Michael Robinson called out Livingstone’s usual cheer of “Who ya with?” and Mitchell and several others responded “LC!”
Mitchell will run track at Livingstone next year in the 100-meter hurdles and be on the cheerleading team.
Athleticism hasn’t come natural. Mitchell was pretty green when she first started running and not a Cavalier green either.
“She came out there her freshman year and couldn’t hurdle,” North coach Phillip Bush said. “But she stuck with it.”
Mitchell was a county and conference champion the past two years. There was a fifth-place finish at the 2A regional meet, just missing out on the state meet which takes the top four finishers from each regional.
Her personal best time for the 100 hurdles is 15.9 seconds. That time came in a late regular season meet.
“I just wanted it really bad,” Mitchell said. “I never thought I could be the best in the county and conference.”
Mitchell worked out with Teanunna Cuthbertson, who starred at North in the hurdles and long jump a couple years back.
“Running with [Teaunna] made me want to do it more,” Mitchell said.
Mitchell’s been on the cheerleading team all four years at North. She likes working with kids and wants to major in early child education.
For now, Mitchell will be back on the track at Eagle Stadium with Bush pushing her along and dad will probably be there too.
“She’s going to be out here over the summer so when it’s time for school in August, she’ll be ready to go,” Bush said.

SALISBURY — Rowan County put a full team on the field Friday night — then launched a full assault against... read more