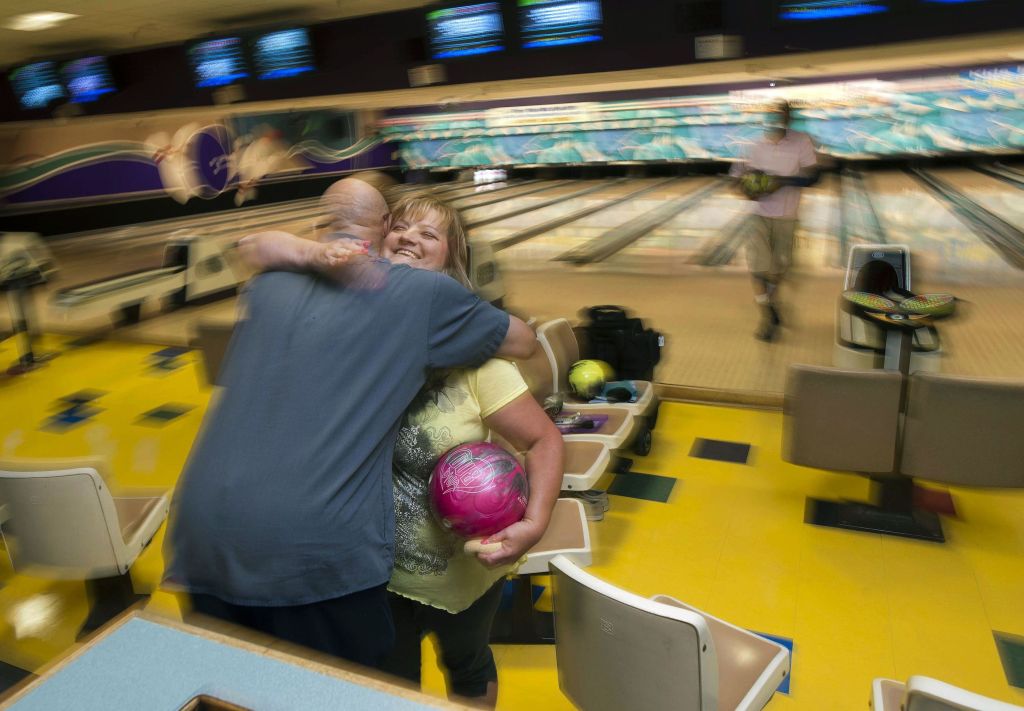 Just call her Mrs. 300.
Penny Hoover made local sports history May 15 when she became the first woman to bowl a perfect game at Woodleaf Lanes.
That’s the first, as in ever, in the bowling alley’s 55-year existence. A dozen strikes, no splits, no spares.
An immaculate pin session.
“I’m excited,” Hoover said this week, as she prepared for her Tuesday night bowling league. “I had always hoped I would be the one. I would’ve been happy if it had been somebody else, but deep down inside, you want it to be yourself.”
Hoover shot the flawless match during her Thursday night Kings and Queens bowling league. Her first couple of games, she bowled around 200.
“I thought I was throwing the ball pretty well,” she said.
She was about to throw it extremely well. She started her next game with a strike, then another.
“I felt really good, felt comfortable,” she said. “The ball was working, pins were falling.”
So it went. And like a pitcher closing in on a perfect game, she had the silent support of her fellow bowlers.
“Everybody just kind of stopped,” she said, “… not bothering me, letting me do my thing.”
Hoover’s nerves started acting up around the ninth frame, but she toppled all the pins again.
Then the 10th frame came. She threw a strike.
“I said, ‘I’ve got to do this. I know I can do this,’ ” she recalled.
Just two more to go. The first? She cleared the lane.
“I said, ‘I’m gonna do it, I’m gonna do it,’ ” Hoover said, “and I threw it, and they all fell, and I was just screaming and jumping up and down for joy.”
She wasn’t the only one.
“Everybody in the bowling center stopped and cheered for her,” Woodleaf Lanes owner Bob Paolino said.
Paolino has owned Woodleaf Lanes since 1977 and has seen other women bowl in the 290s. He called it “very special” to have a woman from Salisbury be the first, and said he “was very happy to see that it was Penny.”
There’s a banner hanging above the lanes at Woodleaf to mark the accomplishment, and Paolino said Hoover is kind of a celebrity there now.
“I think it’s fantastic, and I’m really happy to see that it was her,” he said. “She’s been such a loyal customer over the years, and I always knew she had the potential.”
Paolino has known Hoover just about her entire bowling life. The 47-year-old said she started around seventh grade with her family. They visited other centers and competed in tournaments elsewhere, but Woodleaf Lanes was their home alley. It’s where she got into the youth program, and where she’s bowled for more than three decades.
“I like the competitiveness … but it’s also a social outing for me,” she said. “I just enjoy being around people and enjoy bowling.”
Woodleaf is also where people taught her many of the skills that came together in her perfect match.
“I probably couldn’t have done it without a lot of the help I’ve had,” she said.
And, Hoover said, “It kind of runs in our family.” Her husband James has a 300 game under his belt, and her 25-year-old son Walt has two.
Her younger son, 14-year-old Dawson, has bowled but is more interested in football.
“I told him he had to get back into it, because he had to shoot him one sometime,” she said.
Hoover said in the past, she’s been “very close, but never was lucky enough to finish it out.” It’s harder for a woman to bowl a perfect game, she said, because they have a different arm structure and throw the ball differently than a man.
Paolino said Woodleaf does have “a few other women capable of doing it, so you never know.”
That would be fine with Hoover. She doesn’t want to stay in this rarefied air all by herself. She hopes she just blazed a lane.
“I’m just happy and excited,” she said, “and I hope that all these other ladies out there that have the potential know they can do it, too.”