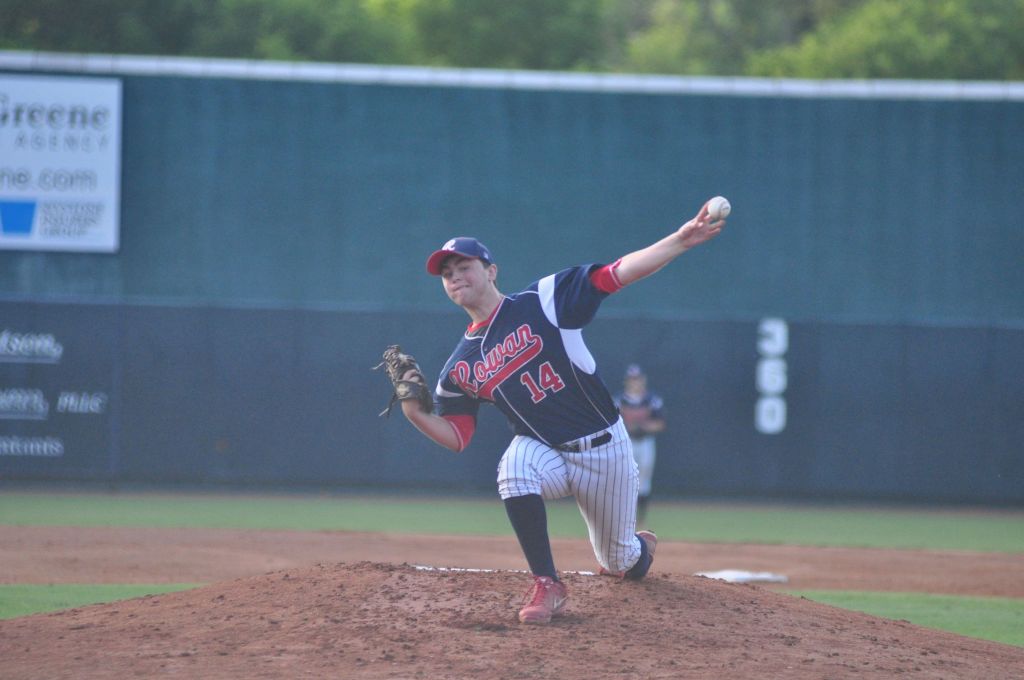 SALISBURY — Rowan County put a full team on the field Friday night — then launched a full assault against Mooresville Post 537.
RC received clutch hitting from slugger Luke Setzer, highlight-reel defense from shortstop Jeremy Simpson and lights-out pitching from East Rowan products Connor Johnson and Harrison Bell. It all helped produce a 10-3 non-league victory at Newman Park.
“It was a good turnaround for us,” said Setzer, the right-fielder who went 2-for-4 with a home run and three RBIs. “We’re Rowan County. We have high expectations.”
Rowan (1-1) did it without head coach Jim Gantt, who is attending the Division II college World Series in Cary this weekend. Under the tutelage of pitching coach Sandy Moore, RC used four hurlers who recorded 16 strikeouts and allowed just one earned run.
“We sent some pretty good arms out there,” said Moore, who will also coach Sunday night’s game at Mooresville. “And when you throw strikes and get ahead of guys, good things happen.”
Johnson and Harrison fed Mooresville (0-3) a steady diet of Special K. Johnson — the flame-throwing southpaw— spelled starting pitcher Brandon White at the start of the fourth inning and fanned seven batters in 2 2/3 innings of smoke-filled fury. Bell, who won only two games for East this spring, followed and struck out seven in 2 1/3 innings of no-hit relief.
“The strikeouts help,” Bell said. “We have good defense, but if you strike them out it leaves no doubt.”
Mooresville was checked on six hits — all singles — and committed six errors. Afterward coach Hut Smith felt like six of the seven dwarfs — everyone but Happy.
“Six errors tonight, seven (Thursday) night against Kannapolis,” he said. “We’ve got to get better on defense.”
Rowan took a 2-1 lead in the bottom of the first when Chance Bowden and Setzer delivered run-scoring singles against losing pitcher Pat Cerullo. Michael Caldwell’s sac fly made it 3-1 an inning later before RC erupted for five runs in the third. A key blow came after Riley Myers lined a leadoff single to left field against reliever Dallas Jackson. Setzer followed with a first-pitch blast that cleared the 20-foot wall in left and disappeared into the trees.
“First-pitch fastball,” Setzer said with a Cheshire-cat grin. “Same thing I got my first time up. I was able to put a good swing on it and hit it hard. I knew it was gone.”
So did many in the lively crowd. They thundered their approval as RC sent 11 batters to the plate and built an 8-1 lead after three innings.
“It’s easy to see the ball at this place,” said Simpson, who contributed a pair of doubles and four top-shelf defensive plays. “When everybody’s hitting like that, it’s fun to play. You can piggyback off of each other.”
If Rowan played every game like this it could start printing playoff tickets right now. It appears to have some heavy lifters in its lineup and enough pitching to leave Moore with an unusually pleasant dilemma.
“It’s new territory here because we’re sort of rebuilding,” he said. “On the pitching side we’ve got some experience, guys who will challenge you. But I don’t know if I could name five starters right now. It’s a good problem to have.”