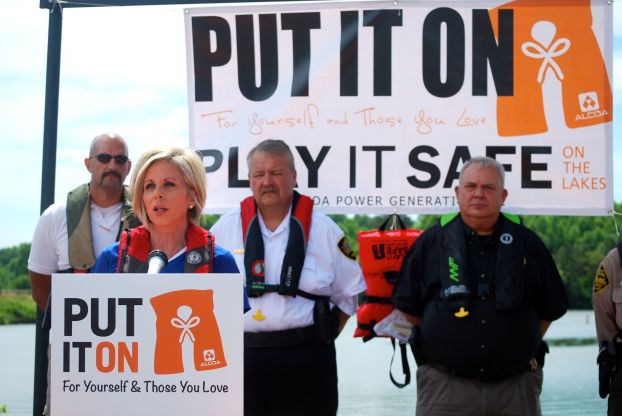 It’s getting safer on High Rock Lake and other recreation waterways. North Carolina experienced a 30 percent drop in boating fatalities in the past year.
But with the state ranking fifth in boating accidents (139) and 10th in boating deaths (16) nationwide in 2013, significant room for improvement remains.
Coinciding with National Safe Boating Week, Alcoa Power Generating Inc. (APGI) launched its “Put It On” water safety campaign Thursday with support from the N.C. Wildlife Resources Commission, local law enforcement and the U.S. Coast Guard Auxiliary.
“We still have a long way to go until we reach zero (accidents),” said Karen Baldwin, a natural resources manager for APGI.
Eighty-four percent of drowning fatality victims in 2013 were not wearing life jackets.
The clear message: Having a life jacket in your boat is not enough. You need to put it on.
One year ago this weekend, a Memorial Day boating tragedy occurred where pregnant Melissa Chambers Britt, 32, and her 3-year-old son William “Jaiden” Britt died when two boats collided. Chambers Britt had not been wearing a life jacket.
At the “Put It On” campaign other stories of loss were shared. “I had the unfortunate experience of driving a 10-year-old boy up to Albemarle after his father and brother drowned below the High Rock dam,” said Sheriff David Grice of Davidson County. Neither the father or brother had been wearing a life jacket.
“A minute or two of putting on a life jacket can prevent a lifetime of sorrow and pain for those who care about you,” said Rowan County Sheriff Kevin Auten.
Any boater under the age of 13 is now required to wear a life jacket unless the boat is anchored, docked, or tied to the shoreline.
For all boaters, it is critical that the life jacket fits properly.
Operator inattention, excessive speed, operator inexperience and improper lookout were the leading primary contributing factors in boating accidents and injuries nationwide in 2013. Alcohol was the No. 1 contributing factor in boating deaths.
“Most of the accidents we see involve alcohol somehow,” said Commander Brad Simpson of the Badin-based U.S. Coast Guard Auxiliary. “We recommend that just like when driving a car, boaters designate a sober driver.”
An operator’s boater safety education or lack thereof also has direct influence on the likelihood of an accident.
Just 13 percent of boating fatalities in 2013 occurred on boats where the operator had completed a U.S. Coast Guard approved boating safety course.
Operators under the age of 26 are required by law to be boater safety certified, or to have someone over 26 years old or a boater safety certified person over 18 years old on board and ready to take command of the boat if a situation arises.
Look to ncwildlife.org<http://ncwildlife.org> for information on free boater safety certification classes.
“No one plans to get in an accident,” Baldwin said. “Even if you are doing everything right, the person in the boat next to you may not be.”
Upcoming on June 7, Alcoa will host water safety events at High Rock (at the Pebble Beach Access Area) and Badin (at the Badin Lake Swim Area) lakes from 11 a.m. to 1 p.m.
At the events Alcoa will donate 200 free life jackets to children, teach families about water safety, and provide sno cones and entertainment for families.
N.C. Wildlife Officer Kristine Koch urges boaters to take the “Put It On” campaign seriously. “A life jacket can be a life saver, but only when it’s worn,” she said.

Your daily look at late-breaking news, upcoming events and the stories that will be talked about today: 1. AP EXCLUSIVE:... read more