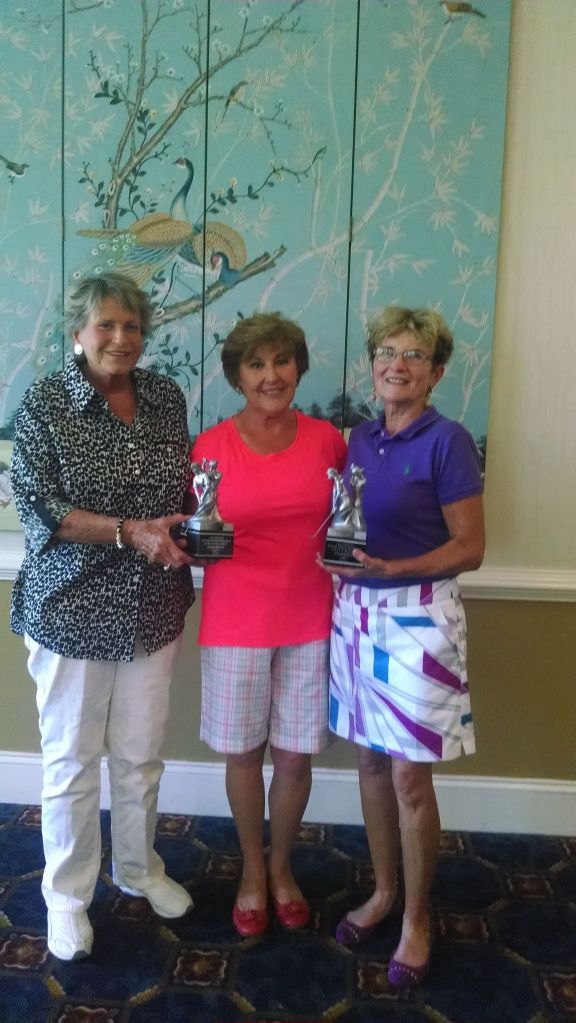 Winning the two-day 33rd Annual Edgar Welch Memorial Golf Tournament played at Corbin Hills and the Country Club of Salisbury was the team of Beverly Cobb and Eileen Full.
Other winners included Tammie Drew and Susan Houston with second low. Third low net went to Susan Morris and Faye Cline in a scorecard playoff. First low gross went to the team of Kristi Laton and Phyllis Durland. Second low gross went to the team of Beth Calhoun and Becky Isenhour.
Tyler Wilhelm, 12, made a hole-in-one on Wednesday at McCanless. He aced the 110-yard No. 3 hole. Emily Wilhelm, Tyler’s sister, witnessed the feat.
• In the eGolf Tour’s Willow Creek Open in High Point, Salisbury’s Frank Adams III has shot 67-69 — 136 and is third after two rounds. At 8-under, Adams is three shots off the pace.
The Kannapolis Intimidators lost 5-1 at Delmarva on Thursday.
Carl Thomore had two of the Intimidators’ five hits and drove in the only run.
• Corey Seager (NW Cabarrus) is tearing it up for the Rancho Cucamonga Quakes of the California League.
Seager has batted .442 in his last 10 games. He’s batting .354 for the season with five homers and 26 RBIs. He homered recently in three straight games.
• Durham’s Jerry Sands (Catawba) is batting .272 with eight homers and 32 RBIs. Sands belted his 11th double of the season on Thursday.
• Whit Merrifield (Davie) is batting .280 with five homers and 20 RBIs for Northwest Arkansas, Kansas City’s Double A team.
Rowan has rescheduled the Mooresville Moors game originally set for May 18. That game will be played at Newman Park on May 27.
Rowan is home tonight against Mooresville Post 537.
Southern Rowan opens tonight at Western Forsyth.
• Kannapolis defeated Mooresville Post 537 6-3 on Thursday. Logan Davidson had a two-run double for Post 537. In other games, Eastern Randolph topped Western Forsyth 3-0, High Point won 14-5 against Davidson County, Concord outscored Mocksville 13-11 and Kernersville pounded Stanly 19-9.
Mocksville fell to 0-4.
Kannapolis is 3-1.
The Mooresville Post 573 Legends are 0-2.

The Kannapolis O’s won 11-2 against Carson on Thursday in Carson’s opener.
Michael Young and Devin Faggart had two hits each for the O’s (3-1).
The O’s will be part of a Saturday tripleheader at A.L. Brown. The O’s are the Northwest Cabarrus-based Kannapolis Junior team, while the Kannapolis Reds are based at A.L. Brown.
Catawba sophomore pitcher Carley Tysinger added another postseason honor when she was named a third team All-America by the National Fastpitch Coaches Association. Tysinger became Catawba’s first softball All-American last year when she was named as a third team selection by Daktronics, which is voted on by the College Sports Information Directors of America.
After just two seasons, Tysinger is high on several Catawba career lists. Her 43 wins is third and her 14 shutouts is just one off the school mark. Tysinger is second in career strikeouts with 617 and needs just 104 to break the existing school record.
Three Greater Cabarrus Homeschool Stallions were selected to the all-tournament team at the Homeschool baseball state tournament played on Saturday.
Sophomore Sawyer Strickland inherited a four-run deficit in the first inning of a semfinal and went on to pitch 6 2/3 innings for a 7-6 win. He struck out six.
Freshman Dalton Lankford hit .500 in the tournament with a solid catching performance in the championship game.
Sophomore Hunter Shepherd hit .429 with three runs scored and played well defensively at first base.

Basketball camp
The 4th Summer Jam Evaluation Basketball Camp will be held June 16-19 at the Benchwarmers Sports Complex in Mooresville.
The camp is for boys and girls. Grades 9-11 from 9-12 daily. Grades 3-8 from 1-4 daily.
The first day of camp clinics cover ballhandling, shooting and passing. The second day is offensive skill work. The third day features footwork and attacking. The final day is live games and video review.
Early registration cost is $60 per player or $50 apiece for two or more players.
After May 31, the cost goes up to $75.
Players receive T-shirts and daily snacks and drinks.
For information, contact Damien Argrett at 704-495-9555. Argrett is a former South Rowan star and Pfeiffer All-American.

Former NFL quarterback and former three-term U.S. Representative Heath Shuler will speak at Catawba at 6 p.m. on Monday, June 2, in Tom Smith Auditorium on campus. Shuler accepted an invitation from Catawba’s new Chiefs Club President Joe Crapster to speak to the membership of the college’s athletic booster club at its June meeting.
Salisbury High’s year-end athletic awards banquet will be held on Friday, May 30, in the gym.

Salisbury Academy awards
Salisbury Academy honored athletes during the school’s annual sports banquet, which included a new Alumni Hall of Fame.
Salisbury Academy awarded 23 fall sport, 13 winter sport, and 23 spring athletic awards to student-athletes. Ninety four percent of all middle school students participated on an athletic team.
Interim AD Shakira Humble presented awards to athletes of the 2014 graduating class. Anna Louise Lewis and Drew Shelby received the Sportsmanship Award, which is presented to the student-athletes who best represent Salisbury Academy ideals through sportsmanship, fair play, and endeavor. Ivy Overcash and Adam Drye received the Jaguar Award, which is presented to the athletes who have consistently demonstrated all-around athletic ability, dedication, and love of the game. Maria Capito and Ben Coulter received the Athlete of the Year Award, given to the athletes who have exhibited superior athleticism and ability across multiple sports and whose performance, spirit, and character inspired their teams to excel.
An addition to this year’s event was the recognition of alumni who have gone on to play college athletics. Allison Lee and Will Collins were the first to be inducted in the Salisbury Academy Athletic Hall of Fame.
A graduate of Salisbury High and Winthrop, Lee recently finished an internship with the Disney Advantage College program. Lee was a member of the Salisbury girls golf team, which earned back-to-back state championships. She was a member of the Winthrop golf team. She served in an administrative position with the United States Golf Association for the 2014 U.S. Open and U.S. Women’s Open Championships in Pinehurst.
Lee plans to attend the University of St. Andrews in Scotland this the fall to be a member of their golf team while completing a Master of Letters in Management and seeking a role to assist with the 2015 British Open.
Collins graduated from Salisbury and the University of Virginia, where he was captain of the golf team. While at Salisbury, Collins was Conference Player of the Year for two years and individual and 2A State champion for two years. Collins was on the ACC All-Academic team at Virginia.
and All Virginia State Team and was runner up for the 2010 ACC Championship.
Collins has been playing professional golf since March, 2012, and has played in numerous tournaments this season.