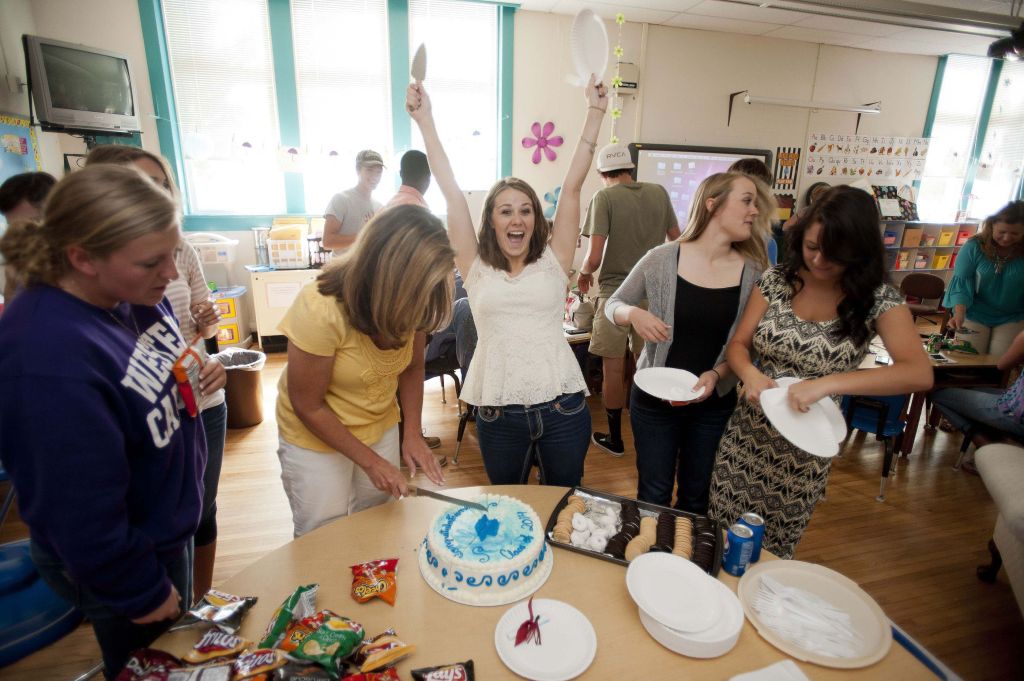 ROCKWELL — You can’t go home again, but 17 East Rowan and Carson high school seniors proved you can at least go back to kindergarten.
Over some cake and soft drinks Tuesday, the soon-to-be graduates returned to one of their kindergarten classes at Rockwell Elementary and, among other things, watched some home videos of those early school years.
The footage was pretty hilarious, as the much tinier versions of the seniors bumped, jostled, jumped and sprinted through field days; did spot-on imitations of their teachers; played “Simon Says”; and rode a limousine to Mr. Gatti’s for doing well in a school fundraiser.
“Some of them look exactly the same, just bigger,” said Glenda Dyson, one of their kindergarten teachers back in 2001-2002. “Others are completely different.”
Everyone seemed to agree, for example, that Josie McNeely, hasn’t changed. The room erupted when the video showed a young Josie shoving Kirk Kovach out of the picture.
Both were among the students coming back for the Rockwell reunion Tuesday.
“We’re all in the same group that hangs out together,” said McNeely, whose mother, Tammy, teaches second grade at Rockwell Elementary.
Salisbury fireman Chipper Thomas shot those videos long ago and also put together the Rockwell Elementary reunion for the kids and teachers. His son, Cameron, will be graduating from East Rowan High June 12.
Overall, they’re a pretty good group of kids.
“A lot of them hang out at the house,” Chipper said. “So far, they’ve pretty much stayed out of trouble.”
As time permitted, the seniors couldn’t help but take a nostalgic trip down the halls and outside to the playground. They recalled how they had to move single-file from place to place or how they might jump up, trying to touch the top of a door frame.
It’s much easier now.
In the gymnasium, they were like first-graders again. They left their keys and cellphones on the floor and dashed off to throw a Frisbee, play basketball, climb the rock wall or do some pullups on the side.
Josie and Cameron noticed their names are still on the gymnasium wall from 2006-2007 as part of the Rockwell Roadrunners Hall of Fame.
“I’m just glad to see everybody,” said Jana Thomas, another of the kids’ kindergarten teachers.
“Hey, no problem,” Cameron Thomas said. “You got me out of work.”
McNeely, who plans to double major in exercise science and Spanish at the University of North Carolina-Charlotte, had Jana Thomas as her kindergarten teacher.
McNeely still remembers nap periods, when she and Cameron Thomas would gab with each other instead of sleep.
Chipper Thomas (no relation to Jana) plans to put a time capsule together so today’s seniors can maybe share these Rockwell Elementary memories and things from high school in the distant future, when many of them will have their own children.
He asked the group to contribute items such as their graduation photographs and notes from their present-day selves to future selves. He’ll add photos of them from kindergarten, the videos and maybe a newspaper from graduation day.
The seniors can open up this time capsule 20 or 30 years from now, and Chipper Thomas promised them one thing.
“Before you know it,” he said, “30 years will have passed.”
Watching the videos, Rebecca Linker, Renae Johnson and Annie Justus said they were struck by some terrible outfits they wore in elementary school and what one of the girls described as “our terrible hair.”
“It’s crazy how we’re all still together and our friends haven’t changed that much,” Drew Kluttz said.
Kluttz said he’s never been a big fan of school, but he plans to attend Rowan-Cabarrus Community College and study electrical engineering.
“Fishing, hunting and working is about all we do,” said Kluttz, who had Frances Justus (Annie’s mother) as his kindergarten teacher at Rockwell.
In all, there were six kindergarten classes at Rockwell Elementary in those days. The teachers were Dyson, now owner of Just the Thing; Jana Thomas and Frances Justus, both now teaching at Shive Elementary; Sandra Hahn, still a kindergarten teacher at Rockwell; Leslie Hunsucker, a teacher at North Hills Christian School; and Dawn Gilland, teaching now at Dole Elementary.
Thomas (daughter Lauren), Justus (daughter Annie) and Dyson (son Davis) have special connections to this group because their children are among the graduates. Tammy McNeely (daughter Josie) taught many of these students, too.
“It was awesome,” Jana Thomas said of the reunion at Rockwell. “It’s still special to get them all together.”
Chipper Thomas couldn’t help but mention that a strange thing happened with these kids, in what seems to be an instant.
“They grew up,” he said.
Contact Mark Wineka at 704-797-4263 or mwineka@salisburypost.com.