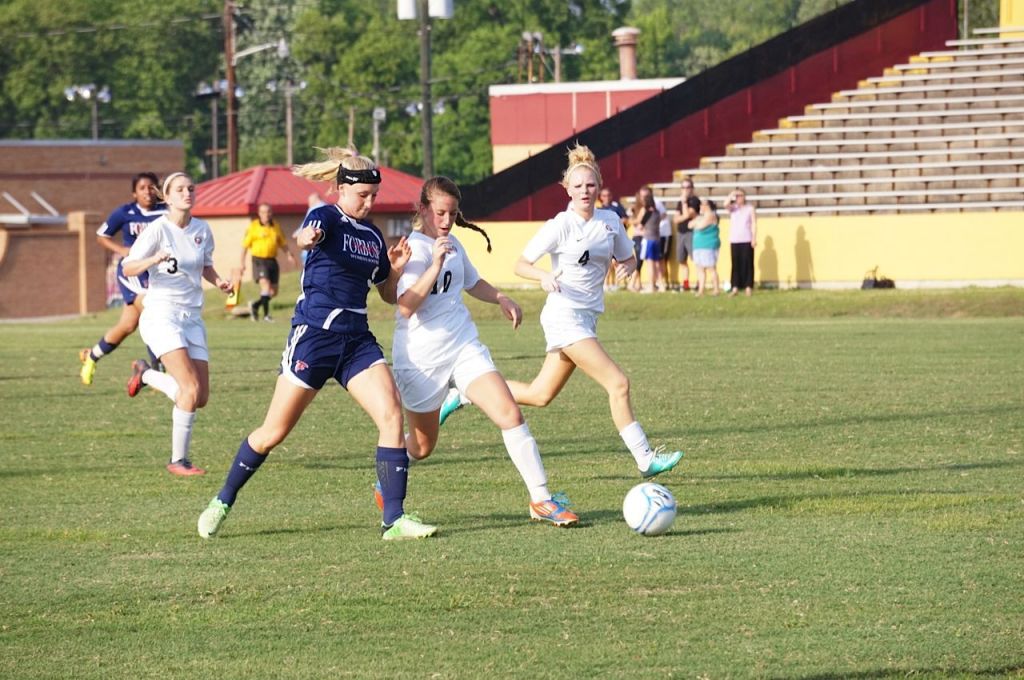 SALISBURY — As season-enders and career-enders go, world records may have been set for the most dry eyes.
“The realization hit me with a few minutes left that this was my last game,” Salisbury senior Ashlyn Heidt said. “I froze for a second and I started to tear up, but then I knew there wasn’t anything to cry about. We had a great season. I’m proud we went as far as we did.”
That summed up Wednesday’s soccer events.
Forbush overwhelmed Salisbury 6-0 in the third round of the 2A state playoffs at Ludwig Stadium. How much, if anything, the Hornets had left in the tank emotionally after Saturday’s epic win at Lake Norman Charter was debatable, but even coach Matt Parrish admitted the Hornets had little chance against Forbush, even on their best night.
“They were clearly the best team we’ve played,” Parrish said. “You never want to get beat, but deep down I know they were just flat-out better than us. They were fast, they were physical, they were composed, they were well-schooled, and they were smart. Forbush is a whirlwind of good soccer traits.”
Mostly, Forbush (18-4-1) is fast. Salisbury’s backs have a limitless supply of gumption, but speed kills in soccer just like it does everywhere else. Forbush was able to bring enormous pressure against Salisbury’s freshman goalkeeper Juliana Anderson, and while she made some nice saves, Forbush converted on six of its 17 shots on goal.
“We were connecting on passes, and when we do that we’re dangerous,” Forbush coach Kenan James said. “We haven’t always been finishing opportunities, but tonight we finished really well.”
Forbush, 25-1 in 2013, got goals from five different players. Nancy Rios scored two, including the sixth one, a wicked, left-footed blast that yelled to everyone that it was time to go home.
“Outside foot to the outside post and one of those shots that just spins and wraps around the back of the net,” Parrish said. “What a great goal. You just tip your hat to that girl.”
The first goal is critical, and Shannon Holden accounted for that one six minutes into the match. Anderson is tall, but Holden drilled one over her.
“We came out doing a good job with the gameplan,” Parrish said. “But then they scored, and everything changed.”
Salisbury (15-4-1) had two good opportunities early but failed to cash in, and Tiffany Kennedy stuck one past a diving Anderson for a 2-0 Forbush lead midway through the first half.
“There were several times when Salisbury threatened — but then we scored,” James said.
Heidt made a hockey-ish kick save to temporarily deny Forbush, but the relentless Rios pushed the lead to 3-0 just 30 seconds after Heidt’s heroics.
“They were really fast,” Salisbury senior midfielder Kate Grant said. “They did some passing stuff you just don’t see around here. You know it’s out there, but we’d never seen anything like it.”
Down 3-0, the Hornets were still playing with cohesion and still creating scoring chances, and there was a sense that if they could just get a goal before halftime they could change momentum.
Salisbury had a corner, and freshman Ceci Cardelle found Heidt in space, but Heidt’s header sailed wide right.
“It was there,” Heidt said. “I just didn’t hit it like I wanted.”
Instead, it was Haley Lindsay, a senior headed to Campbell, who scored seven minutes before halftime, and the Forbush lead swelled like a dental patient’s cheek shot full of Novocaine. Now it was 4-0.
Forbush peppered Anderson with shots in the final minutes of the half, but she stopped them, and Salisbury was able to get to halftime down four goals.
Parrish made his halftime adjustments and made his best speech, but even the most optimistic Hornet fan knew it was all over when Maddi Morsch scored to make it 5-0 early in the second half.
“It was a tougher match than the score,” James said. “Salisbury made things hard for us. They pressured us. There were times they got us out of our rhythm. It was just a night when we scored on a high percentage of our chances.”
Even when it was obvious Salisbury wasn’t going to win, the Hornets still desperately wanted to score. Cardelle didn’t get many touches with Anna Reavis hounding her, but freshman Katie Bullock did have some shots on frame. Salisbury’s last realistic chance came when Grant worked free down the left side. Her shot was low and accurate, but it was smothered at the near post by Forbush’s agile keeper Jessica Funk.
As the final seconds ticked off, Salisbury fans stood and applauded like the Hornets were ahead 6-0. It was a big crowd, the largest Parrish could remember for a girls soccer game, and it was a proper send-off for five seniors — Grant, Heidt, Maddie Labovitz, Emma Labovitz and Susannah Dixon, a feisty gnat who was all over the place one last time.
“It wasn’t close — it’s not like it was a heartbreaker, so it’s not hard to leave the field,” Grant said. “No regrets. I’m leaving happy because we’ve got some freshmen who are going to do some amazing things for this program.”
Parrish probably knew his over-achieving team was operating on borrowed time. Besides the LN Charter game, the Hornets survived a 1-0 struggle with South Stokes in the first round.
“We left it on the field again tonight,” Parrish said. “We never stopped playing, but we were up against a team that is just outstanding. Forbush will be a handful for anybody.”