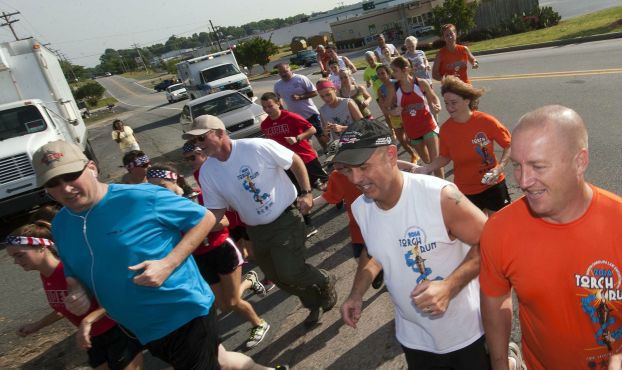 Ronald and Katrina Mesimer were a little uncertain their son, Ryan, would run during the Rowan County leg of the North Carolina Law Enforcement Torch Run for Special Olympics, but he surprised them and ran a short distance Wednesday morning.
The 9-year-old is a track and field athlete for the Special Olympics. The Mesimers said they hoped he would not be too nervous to run. Ryan was joined by numerous law enforcement officers and many more civilians who volunteered to run.
The Torch Run raises funds and awareness for Special Olympics North Carolina. More than 200 North Carolina law enforcement agencies carry the Flame of Hope 2,000 miles across the state, culminating in the lighting of the cauldron to officially open the Special Olympics North Carolina Summer Games in Raleigh.
Katrina said this year marks the second year Ryan has participated in the Special Olympics. He’s grateful the law enforcement officers take part “because they do it for the kids,” she said.
She said the Special Olympics events gives Ryan and the other athletes the chance to take part in a sport or skill that some may not get to do in school. Ryan plays basketball, football and baseball.
Katrina explained Ryan has Fragile X Syndrome, a genetic condition that causes intellectual disability, behavioral and learning challenges. One of the syndrome’s behavioral characteristics, of which Ryan has, includes social anxiety.
“The crowds make him nervous,” Katrina said.
It’s been some time since Sheriff Kevin Auten ran in the Torch Run, but a much lighter Auten ran a half mile on Wednesday. Since Jan. 15, Auten has dropped 65 pounds and is preparing for his first 5K June 6 in downtown Salisbury. He felt as though he were at a crossroads with his health and decided to be proactive. He has since joined a gym, gotten a personal trainer, changed a few bad habits and is looking forward to saying goodbye to 50 more pounds.
Auten works out five-to-six days a week with weights — low weight, high repetition, he said. Auten also rides a stationary bicycle eight-to-12 miles a day. He doesn’t drink sodas, instead opting for water or unsweetened tea. Auten said he was drinking six to eight canned soft drinks a day.
“My goal was to improve my overall health,” Auten said.
His wife, Jennifer, lost 80 pounds since September. Auten has even inspired some of his deputies to also get fit. Some of them ran alongside him in the Torch Run.
“We just like to be involved in the community,” he said of participating in the Torch Run.
It’s the 21st year Lt. Chad Moose has run from the beginning of the event until the end. He began after then Sgt. Steve Beaver encouraged him to take part. Surrounded by his wife and their children, Moose, donning a white Torch Run T-shirt, took a short break before the torch continued into the next waiting hands.
Of the milestone, Moose simply said, “we’re helping Special Olympics, the least I can do is run.”
The other runners in the event from the Rowan County Sheriff’s Office were: Detectives John Brindle, Ollie Greene, Carl Dangerfield and Master Deputy Nate Phillips. Billy Basinger was the Sheriff’s Office Torch Run coordinator.
The Sheriff’s Office participants passed the torch to the Salisbury Police who met them the Wilco Hess on U.S. 29 and Airport Road.
Salisbury Police Sgt. P.J. Smith has been involved with the Special Olympics organization for more than 30 years through his brother, Benji, 37, who is a Special Olympics athlete. Benji Smith has participated in the bowling, basketball and golf events. Not only has P.J. participated in the Torch Run for the last four years, but he is also a certified N.C. golf coach for the Special Olympics.
He took over the coordination of the Salisbury Police Department’s Torch Run participants after the retirement of officer John Lanier. Smith said there were seven officers and three athletes who ran Wednesday.
“Special Olympics is supported strongly by law enforcement,” Smith said.
Students with Carson High School’s cross country track team also participated in the Rowan County leg of the run. Coach Les-Lee Efird said her students have participated in the last five years. The students were honored to be able to run during the Torch Run and bring awareness to Special Olympics.
Salisbury Police officers passed the torch to Lexington Police who met them at the Davidson County line.
Contact reporter Shavonne Potts at 704-797-4253.