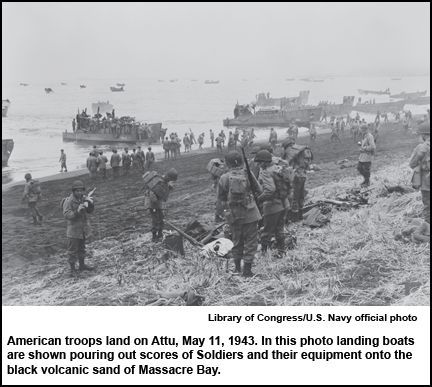 Battle of the Aleutian Islands

Editor’s note: This is the third in a series of columns about forgotten battles of World War II.

In an effort to honor all those who fought and died in World War II, we must continue to tell the story of heroism and hardships American troops lived daily. Many battles became famous and overshadowed smaller battles, but any battle where an American soldier died must be remembered.

The battle of the Aleutian Islands was such a battle. It stretched 900 nautical miles from the Alaskan Peninsula to the island of Attu, but was only 650 nautical miles from a Japanese-controlled naval base in the Kurile Islands.
To think that the Japanese just decided one day to attack Pearl Harbor is mythical. It was a well-planned and long-studied strategy with points of interest laid out. This also would be the first foreign occupation of American soil since the War of 1812. One such strategy was to secure the Aleutian Islands off the coast of Alaska because of the transportation routes it provided. The Japanese believed to control these routes would provide a blockade against the U.S. and thereby they could control the Pacific theater.
It was a viable thought, but our enemies should never underestimate our power and leadership. It proved to be another fatal mistake for the Japanese.
In the spring of 1942, 45,000 American servicemen were stationed in Alaska, with the heaviest placement of servicemen at the Dutch Harbor. During the Battle of Midway, the Japanese thought if they attacked Dutch Harbor, the American Navy would send carriers there, making Midway an easier target. Once again, military leadership failed to fall for the diversion because Naval Intelligence had broken the Japanese codes about the attack.
The Eleventh Air Force stationed there has 10 B-17 bombers, 34 B-18 bombers and 95 P-40 Warhawk fighters. The Navy’s Task Force 8 consisted of five cruisers, 13 destroyers, three tankers, six submarines and Fleet Air Wing Four.
On June 2, reconnaissance spotted the Japanese fleet 800 miles away. The attack took place on June 3, 1942, by the Japanese and the battle continued until Aug. 15, 1943.
American ground forces had to deal with the cold temperatures and rough terrain and slopes. The Japanese had early on established the high ground, but American soldiers continued to show bravery as they moved forward through a hail of gunfire and rocket attacks along with hand to hand fighting. It was during the attack on Fish Hook Ridge that an unknown PFC Joe P. Martinez showed great courage by attacking enemy foxholes with his rifle before being killed. He was posthumously awarded the Medal of Honor.
Both forces continued to battle back and forth during the coming months until on May 28, 1943, in the hours of darkness, a thousand Japanese soldiers would sweep down on Chichagof Valley, catching the Americans off guard and killing the wounded in first aid stations. Americans quickly recovered and managed to stop the attack and drive the Japanese away on May 31. American losses were 549 killed, and the Japanese lost 2,351.
Known also as the “Forgotten Battle,” the battle for the Aleutian Islands proved costly for both sides in personnel and equipment. All totaled, American forces lost 1,481 killed, 3,416 wounded, 640 missing and eight captured. Equipment losses were 225 aircraft and three Navy ships. The Japanese losses were 4,350 killed with 28 captured. Equipment losses were seven warships sunk and nine cargo ships sunk.
Although the Aleutian Island battle was small in the overall picture of American victory of WWII, the men who fought and died there did so honorably. This story is just another reminder of American sacrifice for the sake of freedom.
Rodney Cress is a Vietnam veteran and longtime advocate on veterans issues. Look for future columns about other “forgotten battles” of World War II.