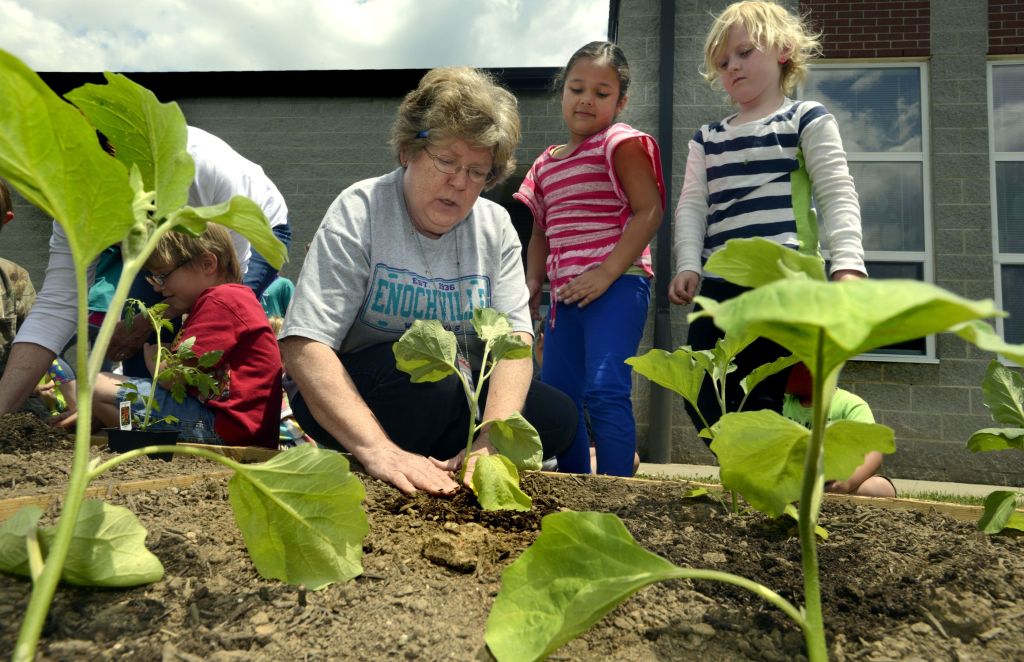 ENOCHVILLE — Students at Enochville Elementary School were getting down and dirty Monday afternoon, and it made fifth-grade science teacher Greta Compton the happiest person on Mother Earth.

Compton watched as Dora Greene’s third-graders squatted around a raised bed of rich topsoil and started scooping out holes in the dirt — part of the preparation for planting three short rows of sweet potatoes.

Greene told her students to keep the plants away from the boards delineating their garden boundary, while also giving plenty of space between the plants.

“A sweet potato will have a vine that spreads,” Greene said.

A group of boys at the corner of the garden became enthralled with a couple of bugs they picked off the grass.

“Some insects are good for a garden,” Compton told them. “Some are not.”

And so went many of the conversations Monday afternoon as a classroom from each grade, K-5, planted seeds and plants in one of six small gardens. From here on, each grade will have a garden the different classes can take turns with tending and, hopefully, harvesting.

Looking to supplement science studies in all grades, Compton thought outside the box and ended up with students and teachers working inside these boxes containing their outdoor gardens.

She pooled several resources to make the individual grade gardens possible. With lumber provided by the PTA, the South Rowan High School carpentry class built the raised beds, located in an open, grassy spot between classroom buildings. Several of those high school students had attended elementary school in Enochville.

With the gardens, Compton said, she and other teachers can talk about the importance of food and where it comes from, how to eat healthier, the development of ecosystems and looking at plants on a cellular level.

Beyond that, it’s important to get kids interested now, not later, in nutrition and biology. The gardening takes them out of a boring classroom, and the gardens will be hands-on laboratories that Compton hopes will lead to a student garden club and summer camps, where a lot of the harvesting will take place.

Monday was only the beginning. These first crops will come in during the summer, when the kids are gone, but Compton and other teachers are making arrangements for looking after the crops and perhaps donating the food to places such as Rowan Helping Ministries or other local food banks.

“We can take this every year and build on it,” Compton said, envisioning a day when the students also will have a greenhouse and perhaps provide food for their own cafeteria.

Compton would like to enter gourds and sweet potatoes from the Enochville Elementary School gardens into competition at the Rowan County Fair in September, opening up a whole new chance to learn.

“You name it, we have it,” Compton said.

When the students return in August, they will be able to have a fall planting, too.

“Get your hands dirty,” her assistant, Debbie Efird, told the kids. It was an encouragement they don’t hear every day.

Kelly talked to her students and asked questions about the need for water, sunlight, shade and good soil. She picked up some white particles spread throughout the dirt and explained how the fertilizer provided some needed minerals and vitamins.

“They’re like the Fred Flintstones (vitamins) for the plants,” she added.

Kelly asked the names for the small plants put in the soil Monday. “Seedlings” and “sprouts” came back as the correct answers. Kelly also asked why a garden might include sunflowers.

“So bees could eat something,” a second-grader answered.

Teachers will be able to incorporate math into the gardens when it comes time, for example, to take measurements of the growing plants. Greene’s third-graders also were computing the growing days for the seeds they planted and when they could expect results — such as 70 days for the carrots, 100 days for the squash.

Deaton said the gardens are a great opportunity for the students to learn about fruits and vegetables grown in North Carolina.

“A lot of these children have never had a garden,” Compton added. “Tomatoes from a store are much different than one right out of the garden. … The idea of an outdoor classroom is more real, more relevant.”

But several fifth-graders were quick to say how they enjoy vegetables and already help with gardens at home.

“I’m used to planting squash,” Jonas Greene said. “That’s what we do in our garden.”

Some more of the fifth-grade testimonies went like this:

• “I like doing this, and you actually get in the dirt,” Cianna Colf said.

• “I’m a vegetarian, so I like this experiment,” Alexis Smith said.

• “I like that we got to go outside,” Raegan Dangerfield said.

When everything was planted, Erin Kelly had her students stand and encircle the second-grade garden.

From there, the one-word chant went from Mother Earth into the heavens: