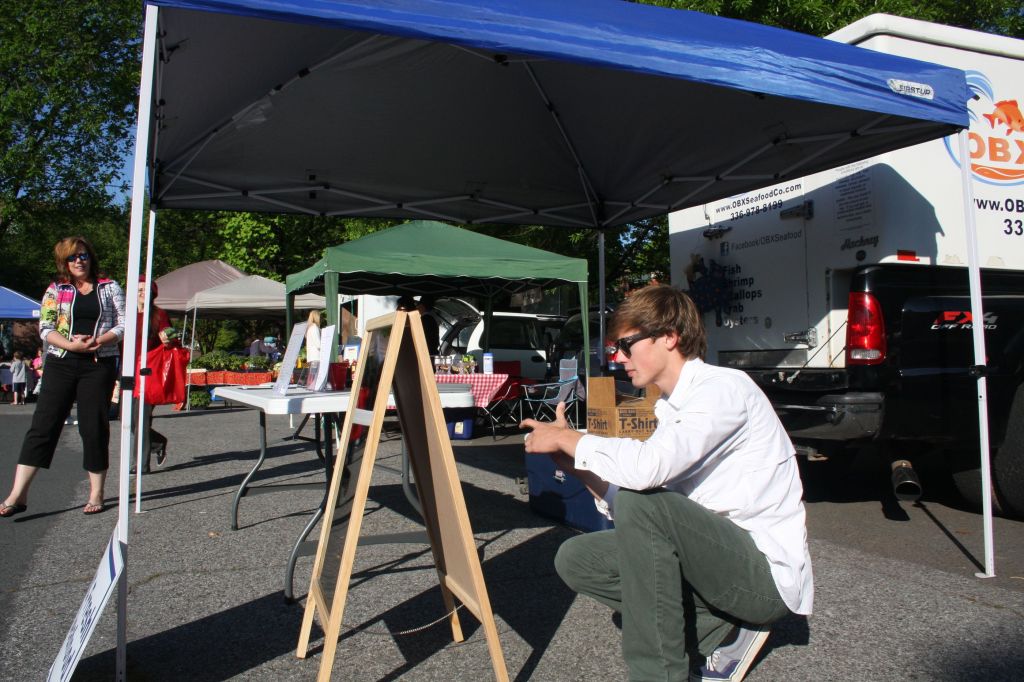 Just after 8 o’clock on a gorgeous Saturday morning, Karen Swicegood and Jordan Budd set up a bright blue tent and open up a bright blue cooler.
The mother and son duo is open for business. At the Salisbury Farmers Market, Jordan is known as the Seafood Guy, and he and his family bring fresh seafood from the Outer Banks to Salisbury each weekend.
Karen and Jordan chat quietly as they work. Karen hangs up a spotted crab made of burlap, while Jordan sets up the table and a sandwich board listing today’s specials.
The business typically brings in a combination of fish, shrimp, scallops, crab and oysters. For the best selection, plan to arrive early, because the inventory doesn’t last long.
“It’s a neat culture,” Karen says of the farmers market environment. “It’s kinda chilly, but I think it’s gonna turn out to be a really nice day.”
Sure enough, the temperature warms up as more and more customers stop by the blue tent. Jordan stops writing on the sandwich board to greet his first customer of the day.
Sheila Brownlow, who has been buying from Jordan since he opened at the end of last market season, picks out two Ziploc bags filled with grouper and mahi, respectively.
Besides the day’s price list of fish, there’s also a sign-up sheet to receive weekly emails. That way, customers can place pre-orders or know what’s coming the next Saturday.
“I get emails every week,” Sheila says. “The fish is real fresh. It’s really good.”
She and Jordan talk briefly about how to prepare the fish.
“Don’t spice it up,” Jordan says.
“I just use lemon and butter,” Sheila says, “and it’s real butter, people.”
Next, Stephen and Deirdre Parker Smith wander up, their shopping bags full with items from other vendors. They literally buy their entire meals here, Deirdre says.
They look at a large piece of mahi.
“Oooh, that’s pretty,” Stephen says.
“That’d be good for the two of us,” Deirdre agrees.
In a few minutes, Jordan opens the cooler to show off the morning’s offerings: tuna steaks, mahi, swordfish, oysters, lump crabmeat, cod and scallops, in addition to a beautiful piece of Scottish salmon.
The shrimp is now coming in fresh. The only thing that’s frozen are crab cakes.
Top-sellers are monkfish and tuna, Jordan says. “Shrimps and scallops go really, really quick.”
Longtime food writer Sara Pitzer of Richfield has been raving about the scallops for months.
“The scallops are so good that when I portion a pound out to make three meals, I then stand by the stove and eat them all on the spot,” she says. “The portion is whatever you bought. And these scallops are not treated with any kind of preservative stuff that keeps grocery-store scallops from browning.”
Karen and her husband, Todd, have visited the Outer Banks for years. They have a friend at Mattamuskeet Seafood who wanted to bring his product to the Piedmont. Jordan, 18, wanted to start his own business.
That’s how Outer Banks Seafood came to be.
“We know lots of fishermen,” Karen says, “and this suits Jordan’s entrepreneurial spirit.”
“This is kinda like my college right here,” he says.
Some weeks, he drives all the way to the Outer Banks. Other times, he’ll meet suppliers in Raleigh.
“We manage to get the freshest seafood we can,” he says.
Just as local farms offer community-supported agricultural programs, Jordan and Karen are toying with the idea of offering a community-supported fishery program.
“We’d love to do that,” Karen says. “Whatever’s fresh that week, we would deliver to customers.”
The business started the last week of November 2013.
Looking back, Karen says, “It was really the worst time to start a seafood transport business.”
Still, customers stuck with them all winter. They set up next to Wells Fargo on West Innes Street before the market reopened.
The experience has not been without growing pains, Karen says. On Saturday morning, some special orders meant for Salisbury got sent with Todd to the Piedmont Triad Farmers Market in Greensboro. A friend of Jordan’s is training there.
“We’re just figuring out a good system that can be reliable,” Jordan says.
Each week, Jordan takes Monday and Tuesday off. On Wednesday or Thursday, he’ll make the run to pick up the seafood, then repackage it in 1-pound portions — or half-pound portions for the scallops — and begin delivering to restaurants in Winston-Salem on Fridays and the farmers market on Saturday. They also deliver to the Peachtree Farmers Market in Advance.
The Swicegoods own four tax offices — one in Salisbury, one in Mocksville and two in Statesville — as well as an investment firm in Salisbury.
“We’ve got a lot going on,” Karen says.
To add your name to the weekly email list, visit www.OBXSeafoodco.com. You can also find OBX Seafood on facebook at www.facebook.com/obxseafoodco.