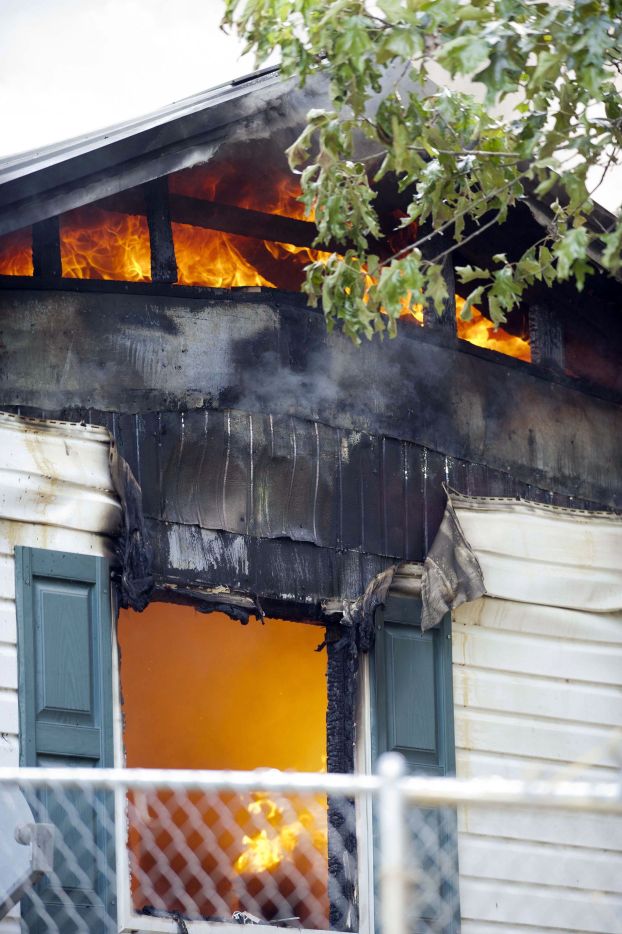 Fire officials say they were unable to determine the cause of a fire that destroyed a Barger Road home this morning. The family was not home at the time and lost five of their pets, some of which they’d rescued.
The fire occurred around 9 a.m. at 1325 Barger Road, off Stokes Ferry Road, where Hally Meyers lived with her twin daughters. Meyers was overcome with emotion as she watched firefighters spray water on the home she’s lived at for the last five years. Her mother, Rachel Stewart, lives a few yards away, at 1335 Barger Road. Stewart called 911 and tried to free the family’s pets, but was unable to save them.
“She worked so hard to buy this house,” Stewart said through tears.
The home was filled with smoke and Stewart said she was unable to go all the way inside.
The fire originated in the living room of the mobile home, but because part of the living room collapsed, officials were unable to determine a cause, said Deborah Horne with the Rowan County Fire Marshal’s Office.
The home was engulfed in flames when firefighters arrived and multiple departments responded to the three-alarm fire. Fire crews were able to keep the fire from spreading to Stewart’s home just a short distance away and from Meyers’ horse in the back yard.
The family moved from Ohio seven years ago and settled into rural North Carolina, Stewart said, because it’s what they were familiar with in Ohio.
Stewart and her family have a habit of taking in stray animals and nursing them back to health. The four cats inside the house — one a 15-year-old Siamese named Isla, perished along with other cats Raven, Sophie and Raisin. The Meyers’ had a bearded lizard that also died in the fire.
Fire crews had to haul water to the home that sat a distance off Barger Road.
The following fire departments responded: West Liberty, Rockwell Rural, Union, Rockwell City, Faith, Millers Ferry, Gold Hill and Granite Quarry Fire. The Rowan County Rescue Squad also responded. The Hanford Dole Chapter of the American Red Cross also responded.