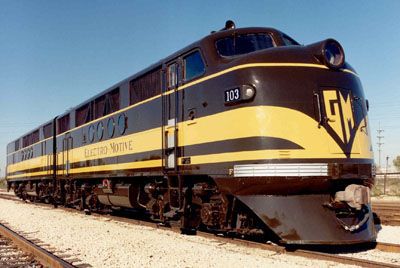 SPENCER — Two weeks ago, the N.C. Transportation Museum announced the 25th and final locomotive for the Streamliners at Spencer event.
However, the FT No. 103 Demonstrator unit is, in many ways, the forerunner and a “father figure” to the streamliner locomotives the event is featuring. Now available for all four days of the massive rail festival, the FT Demonstrator is officially the 26th locomotive to be confirmed for Streamliners at Spencer.
The unit was created to convince business and corporate leaders that diesel engines were the future of rail travel. The engine did the job. Jim Wrinn, editor of Trains Magazine, calls it, “the alpha to the rest of these locomotives.”
When EMC, later and best known as the Electro Motive Division of General Motors, introduced a four-unit mixture of diesel freight locomotives in 1939, it created “The Diesel That Did It,” the diesel that killed steam locomotives.
The engine traveled to Spencer in those earliest transitional days from steam to diesel power for the purpose of convincing Southern Railroad leaders that diesel engines would outperform steam locomotives. They were convinced and the transition led to the long term, piece by piece shut down of Spencer Shops, a facility designed specifically for the maintenance of steam locomotives. The property was given to the state of North Carolina and became the N.C. Transportation Museum, the event location for “Streamliners at Spencer.”
The FT No. 103 engine was donated to the Museum of Transportation in St. Louis some 50 years ago and is painted in the original 1939 “demonstrator” paint scheme. The locomotive is a great finale to the Streamliners at Spencer roster of locomotives.
Tickets for day and nighttime events are sold separately.
During daytime events, both passenger and freight trains will be running on site, pulled by these classic Streamliner locomotives of the 1930s through the 1950s. This will provide visitors an opportunity to ride behind the historic diesels and allow you multiple opportunities to photograph or video these locomotives. The N.C. Transportation Museum’s 57 acre site provides a number of locations where visitors can catch the action from different perspectives.
Regular daytime admission to Streamliners at Spencer for activities running May 30 through June 1 will be $30 for adults and $20 for children per day if purchased in advance. The price increases to $35 for adults and $25 for children per day if purchased on the day of the event.
A special Preview Day, featuring the last of the engines to arrive, special train movements, site preparations and more will be held May 29. Tickets for the Preview Day are $40 per person in advance. Tickets will be $45 on the day of the event.
A special Streamliners Celebration at the Station will be held the night of May 29 at the nearby Salisbury station, featuring live music, guest speakers and a BBQ and chicken dinner for $20/person.
Night photo shoots will be held Thursday through Saturday and are $25 per person, per night. These night photo shoots will feature special lighting, special pairings and set up of the attending locomotives and re-creations of historic trains.
Combo tickets and group discounts will be available, along with discounts for N.C. Transportation Museum members, Norfolk Southern employees and Amtrak employees. More information about the day-to-day operations and ticket prices are available online at www.nctrans.org.
The museum has partnered with Amtrak to offer a coupon code for 10 percent off travel by rail to Salisbury Station, just a few miles from the Spencer museum. Available only for travel during the event days, those booking online may visit www.ncbytrain.org and enter coupon code V563 to receive the discount. Shuttle service will run between Salisbury Station and the museum, but excludes the Crescent and the Carolinian trains.
Tickets are available online at www.nctrans.org or by calling (704) 636-2889 ext. 237 or ext. 257.
More information on the attending locomotives can be found on the museum’s event blog, Streamliners Scoop, available at www.nctrans.org . The participation of all resident and visiting locomotives is subject to timely transportation and mechanical availability.

Spencer may offer reward in 2010 murder