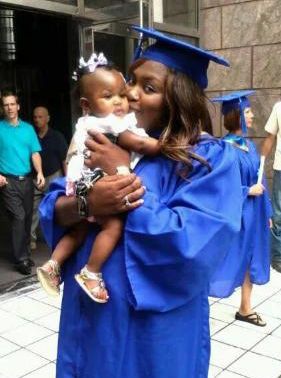 Woman grateful to community after fire

A year ago, Salisbury native Karen Harris lost all of her belongings in a devastating fire and wondered how she’d pick up the pieces. Today, she’s grateful to family, friends and the countless strangers who donated and supported her as she found a way to push past the pain.
Harris, a single mother of 2-year-old daughter Mekenzie, was coming home from her day shift job to take a nap when she discovered firefighters surrounding her Holly Leaf Apartment complex.
She didn’t immediately know it was her apartment until she was allowed a little closer to the scene. Fire officials told Harris lightning struck a bolt inside her daughter’s bedroom closet and blew up, igniting a fire.
“It’s been a struggle. You never realize how much stuff you have. You never know how things affect you, like a pair of socks, until you lose every pair you have,” she said.
Harris recalls being hysterical and struck with a sense of failure.
“My heart was broken. I felt as a parent I failed, because we’d lost everything,” she said.
Harris said she knows that the fire was a freak accident and not preventable.
Even if she were home, she admits she wouldn’t have had time to save any of her belongings. She is grateful that her life and her daughter’s were spared.
The fire reignited around 3 a.m. Saturday, destroying the rest of the apartment.
A Facebook post about the fire sent people Harris’ way who, over the course of several months, donated money, clothing, furniture, gift cards and their endless support. A local photographer took pictures of the aftermath of the fire and they were seen throughout Facebook, Harris said.
Harris was repeatedly surprised by the generosity of the people in the community she’d grown up in as a child.
An anonymous person donated $500 to Harris by dropping money off at a local travel agency. Her aunt’s church — Henderson Grove Baptist Church — gave her donations on several occasions.
Harris said it seemed as though the church collected money for her every Sunday.
She also received donations from the Salisbury campus of High Rock Community Church. Someone posted a request via the church and it spread to the other campuses as well.
Harris said she’s grateful to the many people who helped her, including her father’s coworkers at Hitachi Metals in China Grove and her former coworkers at Novant Health Rowan Medical Center. She worked at Food Lion and received donations from her coworkers and friends there.
The teacher at her daughter’s daycare also helped by watching Mekenzie while Harris worked to find a place to live. Others also volunteered to watch her daughter. Even her sixth-grade teacher donated toys for Mekenzie.
She prayed constantly for strength and said the people who helped her really don’t know how much they encouraged her to not give up.
“It was hard. I didn’t know there were people in the community that would go above and beyond,” Harris said.
“I’m just a single parent from Salisbury. I didn’t know these people at all,” she said.
Harris is grateful for her family and close friends who also stood by her side and helped her as well. She knows she’ll never be able to pay everyone back.
She knows there are kind-hearted people willing to “step out on faith and help someone they don’t know. To that I say a huge thank you,” Harris said.
Contact reporter Shavonne Potts at 704-797-4253.