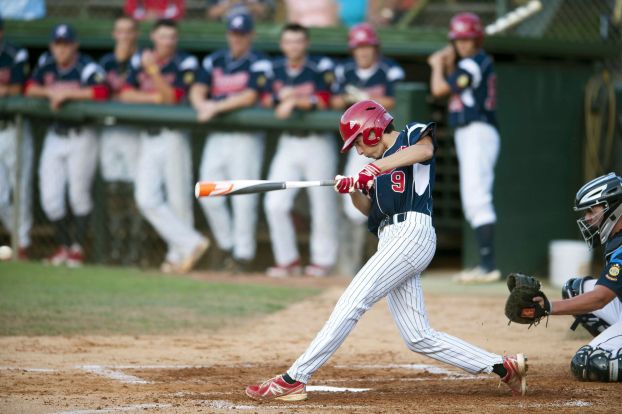 SALISBURY — Jake Pritchard trotted out to third base for the first time in his life, and Rowan County fans listened carefully to the P.A. as they tried to figure out who those kids were in left field, at second base and at designated hitter.
With East and Carson still plowing through the state 3A playoffs, Rowan was understaffed for Monday’s American Legion opener, and perennial powerhouse Kernersville is not who you want to be playing when you’re understaffed.
Still, it was a tight ballgame for seven innings at Newman Park. Rowan surrendered four unearned runs in the eighth and lost 6-1.
“We came out last Friday and tried to get things started,” said West Rowan outfielder Harrison Baucom, whose team was eliminated in the first round of the playoffs. “We just kind of jumped right in there with Legion. We did OK, but Legion definitely is a whole different atmosphere.”
Baucom has quarterbacked West football in front of a lot of people so he wasn’t nervous, but there had to be some look-at-that-crowd butterflies for DH Hunter Shepherd, a homeschooler, left fielder Caleb Link, who didn’t play a lot for West this season, and second baseman Tanner File, a jayvee player at East.
“We didn’t do much hitting, but we played OK,” Rowan coach Jim Gantt said. “We turned a nice double play, we had a really good catch in left, Pritchard did a good job at third, (Michael) Pinkston caught well, Baucom ran down some balls, and (Chance) Bowden picked some throws at first.”
Zac Scudder, Kernersville’s cleanup hitter and a freshman from Pfeiffer caused some problems for Rowan. When Scudder lined out wickedly to Baucom in center in the ninth, it was the only time Rowan got him out.
Scudder homered off Rowan starter Ryan Jones in the fourth, after doubling against him in the second.
“I threw two bad pitches, and, unfortunately they were both to the 4-hole and he drilled them,” Jones said. “It still felt great to be the starting pitcher in the first game of the season for Rowan County. It was a thrill.”
Jones was working on his changeup and his fastball command and didn’t throw a single curveball, so he did well to hold Kernersville to one run in his four innings. He left after reaching his pitch-count.
Jones’ teammates helped him with a double play to get out of a two-on, one-out mess in the third.
Losing pitcher Harrison Smith worked the fifth, sixth and seventh. Smith had two sharp innings, but Kernersville nicked him for the decisive run in the sixth on a run-scoring single by Drew Wilson.
Clay Swaim and Blake Cauble finished up on the mound for Rowan. Rowan didn’t execute on a double-play ball that would’ve prevented all four Kernersville runs that scored in the eighth.
Kernersville put good arms on the mound — winner Mason Striplin, Justin Pegram and Rob Rodgers.
Pegram, who struck out five straight hitters, drew raves from Gantt and Baucom.
“His curveball was impressive,” Baucom said. “But you’ve gotta see it and you’ve gotta try to hit it.”
Kernersville was missing four players — East Surry is still alive in the 2A playofsf and High Point Christian was having an awards banquet — but the Post 36 Devil Dogs, as they call themselves, have started 3-0.
“I can’t be anything but tickled about our pitching tonight,” Kernersville coach Chad Loflin said. “It was a good game for this early, and I thought our arms did great.”
Rowan was held to four hits. Singles by Jeremy Simpson and Bowden set up a run-scoring groundout by Pinkston in the fourth. Pritchard had an infield hit in the seventh, and Riley Myers had a pinch-hit double in the ninth.
Rowan (0-1) isn’t scheduled to play again until Friday when it hosts the Mooresville Post 537 Legends.
“Obviously, we’ve got a lot of guys still coming,” Jones said. “We’ll be a good team. This was just the first night.”

MOUNT ULLA — He’s not the fastest in the county for 100 meters, but as far as the distance that’s... read more