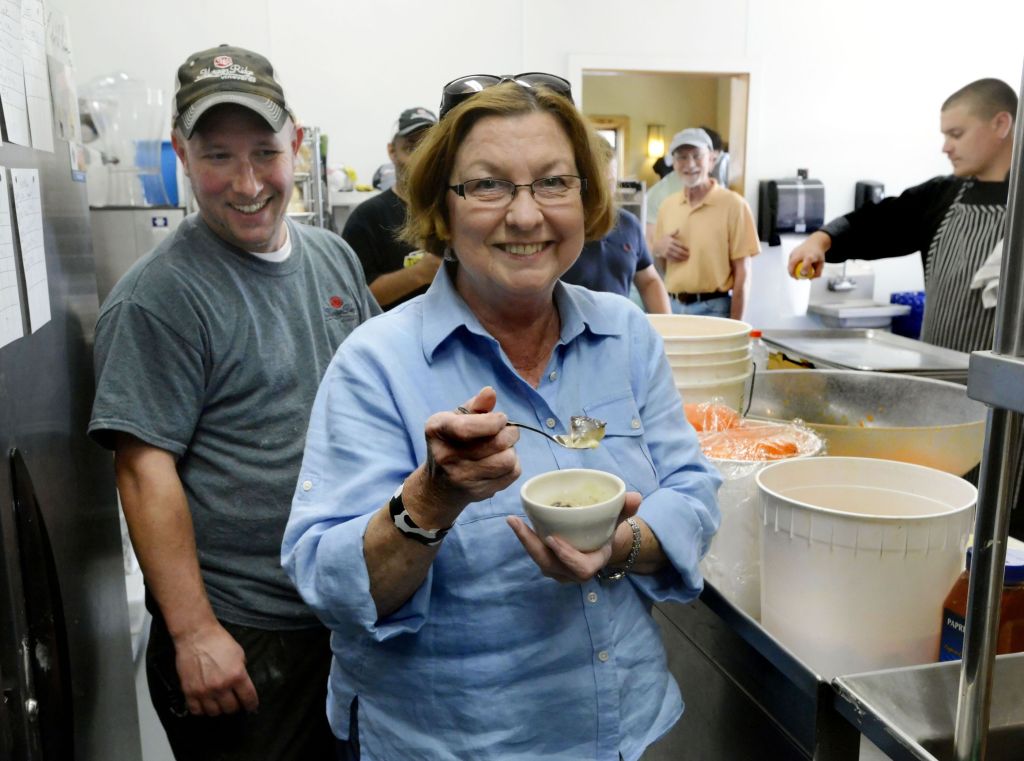 Entering the kitchen just a couple hours before Riot in the Pasture can be a dangerous undertaking. Knives are furiously chopping, sweet potatoes fly through the air, cries of “Hot behind you!” break out.

Amid the chaos of last minute prep, Nain says “Come here, let me show you something.” He leaves the kitchen and walks into the constantly-cool barrel room where the wines age. “We got so much produce, so many lettuces and stuff, I didn’t have anywhere to put it.” So there with the wines are boxes of fresh greens of every sort, from leaf lettuce to collards to kohlrabi. And there’s three enormous bowls of prepared salad, multiple lettuces topped with strawberries, radishes and goat cheese, waiting to be set up.

“The produce we got this year is just amazing. It was clean and beautiful. Last year, I was scrubbing dirt off some stuff,” Nain said.

David Correll of Correll Farms is out in the pasture, relaxing at his vendor booth, filled with the same fresh vegetables. “I like coming out here and seeing people I usually only see at the Farmers Market. We’re happy they’re using our stuff.”

Back in the kitchen, Scott Graden is wrist-deep in the chicken filling for the crepes with wild mushroom sauce. Nain offers a taste of the sauce, full of plump shiitake mushrooms grown by the woman who happens to stick her head in the door, Brenda Garner of Cedar Creek Farm in Davidson County.

“Ooh, that’s delicious,” she says, scraping the bowl to get all the sauce. Her farm is between Reeds and Tyro, and they have a store there. They sell to restaurants and chefs and at the Lexington Farmers Market. This is the third year they’ve contributed to Riot in the Pasture.

At one station, William Caldwell and Jeff McClure are slicing numerous varieties of cheese from Ashe County and opening pickles from Pickleville in Charlotte. Out comes another huge bowl, which Nain calls the magic bowl. “Every time I make pico de gallo, we use this bowl.” It has a crack down one side. “I guess we should throw it away, but I keep hanging on to it. There’s just something about it.”

The cheese cutters are now dicing tomatoes finely for the pico. It will be served with small chopped steak bites, made of local beef.

Cornbread that Nain had been mixing with a gloved hand comes out of the oven. The cornmeal is from MikNik Farms in Farmington, where they grind the corn themselves. Keretha and Mickey Shore are one of the vendors in the grass, with cornmeal, grits and dried apples that contain nothing but apples.

In one gigantic pot on the stove is Brunswick stew, spring style. “Since limas and peas aren’t in season,” Nain explains, “I used the ends of the bok choy and Napa cabbage. I don’t want anything to go to waste.”

Another pot holds gravy made with andouille sausage from Wild Turkey Farms. That’s going over the shrimp, from Outer Banks Seafood and Stone Seafood in China Grove, with MikNik’s grits.

Outside, Cynthia Jones is coordinating the stations, making sure the food is in the right place, each table has the right tools and utensils, plates, napkins, forks. She’s “having a great time. I just stay out of the kitchen and keep up out here.”

The small kitchen holds seven or eight people. No one gets upset, even with a photographer in the corner trying to get the best shot. Everyone’s in a hurry, but no one is in a panic. Nain has done this before. He’s a laid-back guy who doesn’t need to give many directions. The staff knows what to do. There’s a time chart taped to one of the coolers, and people check things off as dishes are ready.

Out come trays of pork-stuffed cabbage with a sangiovese tomato sauce. Nain uses Morgan Ridge wines in almost all of his dishes.

For the kids, there’s flatbread veggie pizzas and tiny pigs in a blanket, minus any wine.

When food moves outside, lines form immediately, and everyone looks anxious and hungry. The shrimp and grits station is a little slow, because they’re cooking the shrimp as they go, along with a colorful blend of peppers and onions. Tommy Baudoin, owner of Morgan Ridge, is manning the nearby beer tap. When the veggies seem to be taking too long, he pours a little beer in each pan so they can steam.

The Brunswick stew table holds a pan of rolls, made by Emma Martin at the Bread Basket, and that cornbread. Martin, a regular at the Farmer’s Market, has provided all the bread and rolls for the day, including Tuscan herb rolls, a big hit with diners.

With the stew are two huge bowls of salad — the strawberry, radish and goat cheese, and a broccoli slaw.

At another station, with another long line, are collards, the chicken crepes, the steak bites with pico de gallo, the cabbage rolls, the roasted sweet potatoes, the pigs in a blanket and the pizzas.

After crippling lines in 2013 and a shortage of food, Nain changed his whole game plan.

“That was just not the way to do it,” he said. “That’s why we’re doing stations, so people can get in line, eat, try something else.” After seeing how much food was thrown away last year, untouched, Nain also asked for Bread Riot volunteers to serve the food and control portions. Six-inch plates and Nain’s portion sizes kept things under control, though the free-for-all at the cheese and pickle station left it decimated after a short while. Except for the pickled okra. It was not moving that fast.

The Dart family stood in line at the crepe/steak/cabbage station. “We don’t know what’s here, but we’ll eat whatever it is,” she says. This is their first Riot.

Amy Baudoin and her staff are so busy in the tasting room, they never get outside. When Jessica DeWitt has a minute, she rushes over to make a sangria, using Morgan Ridge’s peach wine, ginger ale, peach white grape juice and a little Crystal Light peach drink mix to punch up the flavor.

Nain, after the Riot was over, said he and his kitchen cohorts had worked Wednesday, Thursday, Friday, Saturday and Sunday to get the food prepared. He says he never could have done it without the help of his kitchen staff. On Monday, he headed to the beach.