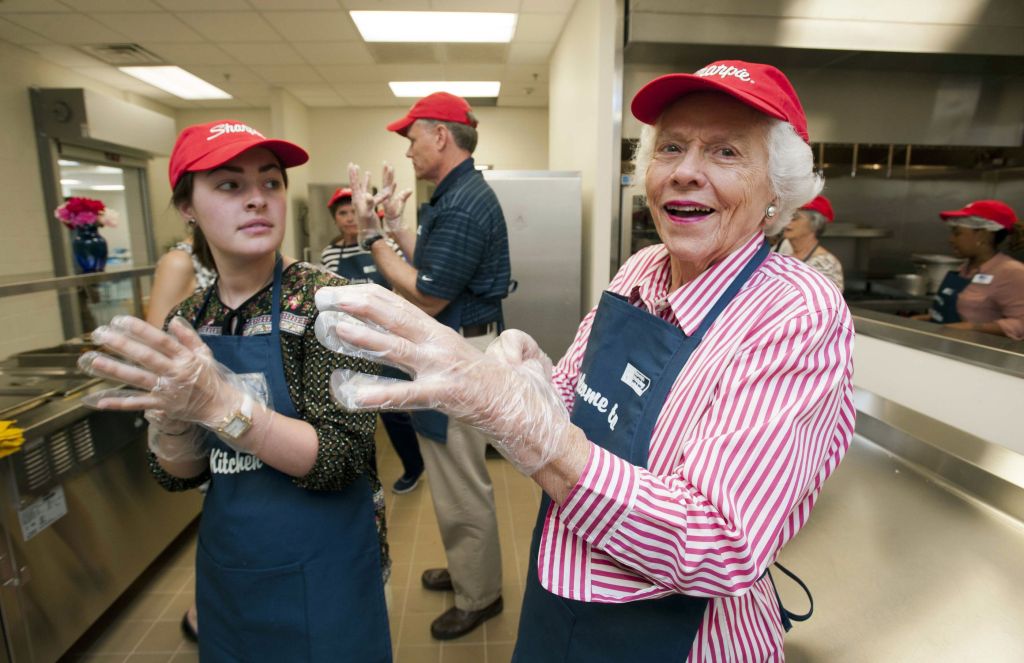 The community raised $5.8 million to build the center, dubbed the “miracle on Long Street.” Located across the street from the original RHM building, the facility holds the homeless shelter and Jeannie’s Kitchen, named in memory of Jeannie Jordan who died in 2011 and conspired with Grubb and Ginny Williamson to start the soup kitchen in 1982.

As has been the practice since 16 people ate the first meal on Nov. 16, 1982, the soup kitchen offers a free, nutritious meal with no questions asked, no strings attached. Grubb and several other volunteers served 165 meals on Monday.

“It’s unbelievable, fantastic,” Grubb, 91, said of the new facility. “It truly is a miracle.”

Diane Hundley, former program coordinator for Rowan Helping Ministries and now board chairwoman, served as well and recalled taking her daughters, now in their 30s, to the original soup kitchen in strollers while she volunteered.

“This is a big day for our community,” RHM Executive Director Kyna Grubb said as she greeted people lined up to eat.

Jordan’s legacy will live on through the new kitchen and the gifts of her family and friends, Grubb said.

“It’s awesome. It’s great,” he said. “It’s good to have a community that cares.”

Jeannie’s Kitchen will continue the ministry of feeding hungry people, whether they are hungry for a meal or human interaction. One guest said he ate at the soup kitchen when it started at First Presbyterian and then moved to Long Street. On Monday, he was one of the first people in line.

“It means a lot in my life that I can drop in for a meal,” he said. “It’s not my only meal of the day, but I enjoy coming out and talking to people.”

Serving the first meals in the new facility named for her mother was emotional for Lyn Beaver, who said she felt honored and privileged to continue her mother’s work. Sunday was the third anniversary of Jordan’s death, so Beaver said the timing of the first meal was ironic.

“The kitchen is such a blessing from God,” she said. “I knew my mother was right there with us, and my mother was smiling, watching every one of us.”

During a May 7 dedication ceremony, the Rev. Bob Lewis, who served as pastor of First Presbyterian when the soup kitchen began, said Jordan, Grubb and Williamson had a dream to feed people and worked until it became reality. Not everyone embraced the ministry at first, Lewis said.

“There were some people at First Presbyterian who it took a while for them to get on board with this idea that we had a soup kitchen in the basement of the sanctuary, because on Sunday mornings it smelled like onions,” he said. “So I told the people at First Presbyterian that I think God likes the smell of onions, especially when it comes to worship on Sunday mornings.”

In the first two weeks, the kitchen served 209 lunches, Lewis said, and soon was serving an average of 85 well-balanced meals a day, Monday through Friday. The soup kitchen was a success because of support from the larger community, including all of the downtown churches, he said.

“When there’s something beautiful happening, people want to become a part of that and make it happen,” Lewis said.

The first check came from the late Stan Johnson, pastor of Mt. Zion Baptist Church. An 84-year-old China Grove woman heard about the soup kitchen and donated 23 quarts of green beans and 17 pints of tomatoes from her garden.

The soup kitchen operated in the church basement for seven years until Ralph Ketner spearheaded the construction of the original RHM building on Long Street, which will be named for him when it is renovated. Food Lion, which Ketner co-founded in 1957, stocked the pantry for Jeannie’s Kitchen last week.

“It was beautiful to behold, bright and shining as the sun,” he said.

Lewis when he penned the words for Jordan’s memorial service in 2011, he had no idea the community would gather three years later to dedicate a place called Jeannie’s Kitchen.

“There is something that sounds so right about that,” Lewis said. “I love it — Jeannie’s Kitchen.”