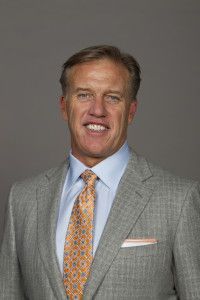 John Elway, Bob Costas, Marv Albert and Rick Reilly will all be on hand at National Sportscasters and Sportswriters Association’s 55th Annual Awards Banquet on Monday, June 9, to highlight the NSSA’s awards weekend in Salisbury.
Elway, elected to the Pro Football Hall of Fame in 2004 after leading the Denver Broncos to five Super Bowls as a quarterback, will present Reilly, a longtime friend, into the NSSA Hall of Fame.
Costas, a 2012 NSSA Hall of Fame inductee, will present Albert as this year’s Sportscasting Hall of Fame inductee. Albert currently serves as a play-by-play announcer for NFL games on CBS and NBA action on Turner Sports. Albert is a 19-time winner of the New York Sportscaster of the Year award.
“We’re very fortunate to be able to draw the elite in our business,” NSSA Executive Director Dave Goren said. “The fact that they come here is rewarding. It says a lot about this organization and its history.”
The banquet will be held at Catawba’s Goodman Gym.
“We kind of want to show off the new buildings in town,” Goren said. “You want to make the town look good.”
National Sportscaster of the Year Mike ‘Doc’ Emrick of the NHL on NBC will be honored along with National Sportswriter of the Year Peter King. King was the 2012 and 2010 Sportswriter of the Year, becoming the eighth sportswriter to win the national award in consecutive years.
The NSSA will feature ESPN’s Outside the Lines story ‘Carry On,’ the organization’s 2013 Story of the Year. ‘Carry On’ profiles two high school wrestlers, one blind and one an amputee, from Cleveland. An issues in sports forum will follow a showing of the piece Saturday night at the Marriott.
“It’s one of the best stories I’ve ever seen,” Goren said.
The annual issues forum will be held Saturday night, June 7, at Toyota Racing Development. Sunday will feature a sports book festival at Literary Bookpost. Noted authors include Bob Ryan, ACC writer Dan Collins and Roland Lazenby, who recently released a book chronicling the life and times of Michael Jordan.
Goren says he expects about 65 of the 105 state award-winners to attend the awards weekend. Jeff Charles, radio voice of East Carolina football and basketball and David Glenn, who hosts a radio show heard throughout the state, are NC’s co-Sportscasters of the Year. Longtime Fayetteville Observer scribe Sammy Batten is the state Sportswriter of the Year.
Tickets for the weekend are available at nssafame.com. The deadline to purchase tickets is Friday.

MOUNT ULLA — He’s not the fastest in the county for 100 meters, but as far as the distance that’s... read more