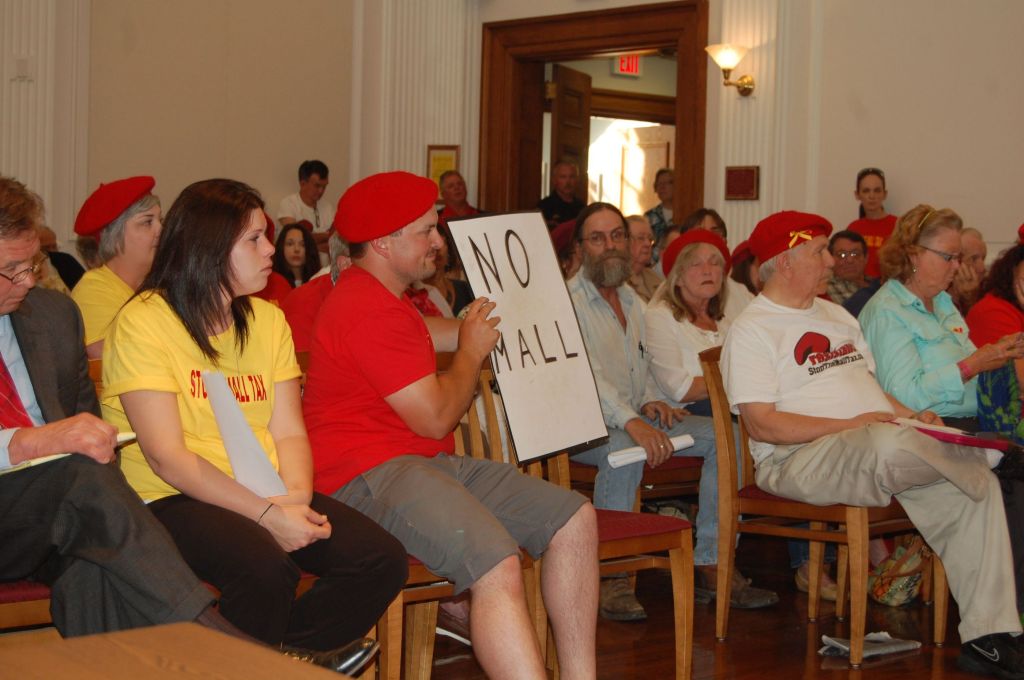 Seventy-three people signed up at Monday’s Rowan County Board of Commissioners meeting to argue against the county’s decision to purchase the mall and pay the debt with a loan approved by the state’s Local Government Commission.

According to the night’s public speaking list, nine people had signed up to support the commissioners’ decision to finance West End Plaza.

In the end, only five people from each side were given an opportunity to speak during the hearing as the result of a motion put forth by commissioner Craig Pierce and passed by commissioners.

The hearing was a necessary, mandated part of the process for the LGC to consider the county’s request for approving a loan.

Roy Bentley, a member of La Resistance and speaker at Monday’s meeting, said commissioners violated procedure with approving the change in the rules of the public hearing.

“They had to say in advance at advertisement it would be conducted that way,” Bentley said. “An amendment to the procedure must take place at a prior meeting, not a current meeting. It’s simple, they advertised anyone could come and speak – 73 signed up. It’s a violation of their own rules.”

The commissioners’ room was packed above capacity prior to the start of the meeting so attendees had to relocate to the overflow room and watch the meeting via a screen.

Dozens of people, many wearing red berets and supporting La Resistance, turned out alongside others who support the county’s efforts to purchase and renovate the former mall to serve the county’s capital needs.

Phyllis Sides was the first speaker, and the first to support commissioners’ decision to buy the mall.

“I want to encourage you four gentleman sitting in front of me to continue what you started,” Sides said. “When you voted for this, you must have thought it was a good thing, or you wouldn’t have voted for it.”

Sides urged commissioners not to let people who wear red berets “take over the management of the county.”

“That is what they are trying to do. They haven’t been elected to office, and a lot of them won’t be elected,” Sides said.

Commissioner candidates on the November ballot also took their turn at the microphone to weigh in on West End Plaza.

“It’s the Local Government Commission that makes certain that elected officials avoid getting in debt over our heads,” said Rick Locklear, a Democrat candidate for county commissioner. “I object to the approval of the funding.”

Locklear said it was wrong for commissioners to take money out of the county’s fund balance to purchase the mall.

“Whatever your thirst is for spending, you have to stomach to pass an appropriate tax rate to meet that,” Locklear said. “In essence, what (commissioners) are doing is deficit spending.”

Forgiveness is what commissioners are asking for, Locklear said.

“We’ve already bought the mall. (Commissioners) have circumvented procedure set in place by the Local Government Commission,” Locklear said. “What the government commission is asking you to do is go through the process, do your due diligence, make sure it is an important investment and make sure these folks have an opportunity to speak their mind.”

Republican commissioner candidate Greg Edds said the West End Plaza issue has “taken on a life of its own.”

“There are some here who feel the current board does not communicate a positive vision for this project and they simply want to be informed by (commissioners’) plans,” Edds said. “Some opposition has grown, unfortunately, from a genuine concern brought on by statements from members of this board to downtown Salisbury business and property owners who would be purposely hurt through the purchase of the mall.” Edds said.

Edds asked commissioners to consider a plan to allow the county to return funds to cash reserves and delay moving any departments into the mall until three things happen – a completed a facility master plan has been received, a county space needs analysis has been completed and any planned department relocations until new commissioners are seated in December are delayed.

“This is logical. It is respectful. It is a well-balanced compromise,” Edds said. “Everyone here tonight knows that you can never make everyone happy. Being an elected leader means recognizing that, instead of always pushing forward, sometimes you have to circle back first, gather the troops and make sure they are with you before forging ahead.”

Attorney Bill Cameron of Sherrill & Cameron said “there is a due process issue and fairness issue” associated with limiting West End Plaza proponents and opponents in the public hearing to five speakers per side.

“The purchase of the mall was controversial. You ignored the cries of the public, and you did not do due diligence in choosing to make a bid through auction.com,” Cameron said. “You have overpaid for the mall.”

While the board approved sending the request to the Local Government Commission, and many dissenters were not allowed to speak, another chance will be available when the issue hits the floor on June 3 in Raleigh.