Todd is surprise winner in Texas 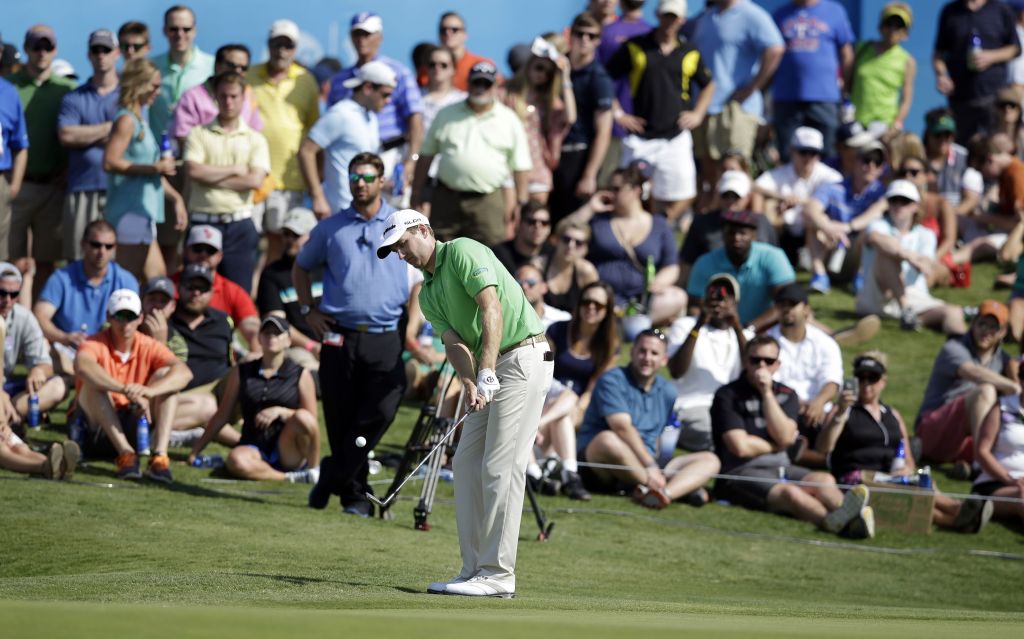 IRVING, Texas (AP) — Brendon Todd was shocked when he saw his ball settled at the base of a tree by the 13th green in the final round of the Byron Nelson Championship.
As good as he is with his short game, it wasn’t natural for the slender 6-foot-3 Todd to set up left-handed and hit the ball with the back side of a 4-iron.
“Definitely, without a doubt,” Todd said when asked if it was his most unique shot in a competitive round.
And it came in his first PGA Tour victory, a two-stroke win Sunday over Mike Weir.
Todd saved par at the 185-yard 13th hole after knocking the ball to 7 feet, part of a bogey-free 4-under 66. He finished at 14-under 266.
It was the 77th career PGA Tour event for Todd, who twice in the past five years had to go back to back to the Web.com Tour to regain full playing privileges. He earned $1,242,000, a PGA Tour exemption through the 2015-16 season and a spot next year in the Masters.
“I’m excited about the relief like I finally have a chance to play the PGA Tour for multiple years,” Todd said. “No. 1, going to Augusta for the Masters is a dream come true.”
Todd, who took the lead for good with birdies at Nos. 9 and 10, is the fifth former University of Georgia player to win on the PGA Tour this season. He joined Masters champion Bubba Watson, Harris English, Russell Henley and Chris Kirk. Todd also is the eighth first-time winner this season.
Weir, the 2003 Masters champion who won the last of his eight PGA Tour titles in 2007, finished with a 67. Charles Howell III and Marc Leishman tied for third at 10 under.
After Todd hit his tee shot at the 195-yard second into a greenside bunker, his shot from the sand landed on the green and rolled in for a birdie. When he knocked in a 14-foot birdie putt at the 181-yard fifth, he tied Weir — who made a bogey on No. 6 — for the lead at 12 under.
Weir had his best tournament since finishing second behind Dustin Johnson at Pebble Beach in 2009. The 44-year-old Canadian left-hander hadn’t had a top-25 finish since 2010, the same year he suffered a partial ligament tear in his right elbow before a stretch when he missed 17 cuts in a row — including all 14 tournaments he started in 2012.
“Best golf I played in a long time. I was happy with the way I played,” Weir said. “ I was definitely determined to try to win today, but I can feel good about the way I handled things out there.”
Howell shot a 67 with a three-putt bogey on the final hole, while Leishman had three bogeys in a five-hole stretch on the back nine for a 68.
Weir had birdies on four of the first five holes. He was 13 under and ahead of Todd by two strokes when his tee shot at No. 5 settled 11/2 feet from the cup. That came after Weir blindly hit out of a fairway bunker to 3 feet at No. 4.
But Weir missed the fairway and green for a bogey at the 431-yard sixth hole. At the same time Todd, who played the last 31 holes at TPC Four Seasons without a bogey, was tapping in at the fifth.
Todd rolled in a 17-foot par-saver at No. 17, keeping a two-stroke lead going to the final hole. He needed only 99 putts in the four rounds.
“It was a dream week for me on the golf course,” Todd said. “Felt like I absolutely scored my pants off. It was just a short game display. I have a great short game, and even I’ll say it was special this week.”
Boo Weekley (68) was 9 under to tie for fifth with James Hahn (70). Weekley is the defending champion at Colonial, about 30 miles away and the next tournament.
Louis Oosthuizen, the 2010 British Open in the final group with Todd, had already slipped four strokes back at the turn before bogeys at Nos. 10-11. The 2010 British Open champion shot 74, 10 strokes worse than Saturday, to tie for 11th at 6 under.
Martin Kaymer won The Players Championship last weekend and opened at the Nelson with consecutive 67s. But he shot 71 Saturday before a bogey-birdie-bogey start Sunday on way to a 72 and tied for 29th at 3 under.
That was a stroke better than Jimmy Walker, who will remain No. 1 in the FedEx Cup standings.
Jordan Spieth, the 20-year-old Dallas native ranked eighth in the world, had a closing 68 to finish 2-under and tied for 37th at the tournament where he made the cut as an amateur at ages 16 and 17. He finished two strokes behind 17-year-old Scott Scheffler, the top junior golfer from Dallas who played on a sponsor exemption.