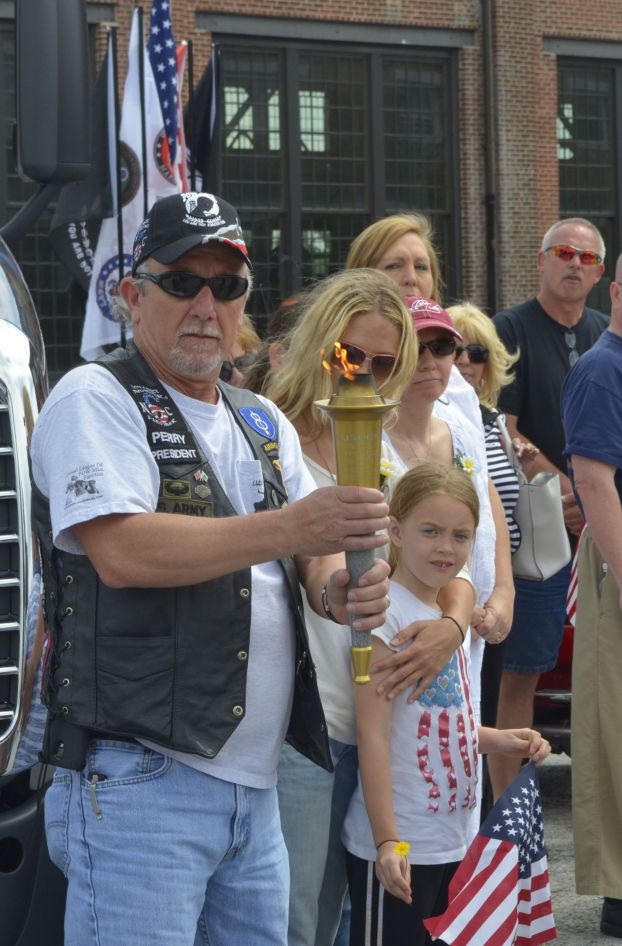 SPENCER — Residents lined both sides of North Salisbury Avenue in Spencer on Saturday, with flags waving and applause.

They paid tribute to military service members who gave their lives for their country, and those whose sacrifices are harder to see.

The Rolling Thunder Flame of Freedom — carried annually to Washington, D.C. on Memorial Day weekend — stopped in Spencer on Saturday afternoon for a brief ceremony.

Perry Kesler, of Rolling Thunder Chapter No. 6 based in Winston-Salem, said the event is designed to bring attention to prisoners of war and those missing in action, and to honor those whose loved ones have died in service to their country.

Kesler said this year’s ride is, in part, a protest of what he called the U.S. government’s lack of action to bring Sgt. Bowe Bergdahl home.

Bergdahl is the only U.S. prisoner of war being held by the Taliban. He was captured in Afghanistan in June 2009.

“We would like to remind our government that this young man needs to be brought home, and brought home now,” Kesler said.

He said that some 700,000 Rolling Thunder riders and others are expected to take part in the cruise to Washington, D.C.

Kesler, who lives in Salisbury, rode to Statesville with other Rolling Thunder motorcyclists and their friends to meet the Flame of Freedom.

The parade through downtown Spencer included six Gold Star mothers and wives — women whose sons or husbands have died in service.

Among them was Jane Gilchrist, of Statesville. Her son, Alex Gilchrist, died at age 24.

She said she hoped that events like this would focus attention on the plight of soldiers who suffer from PTSD. “There shouldn’t be a stigma about this disease,” Gilchrist said.

Janice Badgley, president of the Magnolia Chapter of Gold Star Mothers, said the Flame of Freedom event helps people learn about the organization.

Even some high-ranking officers in the military have not heard of Gold Star Mothers, Badgley said.

“We’re so proud of this community,” Badgley said, for turning out in support of the event.

For Gilchrist, the event was a reminder that people care.

“After some years, you may think people forget. This tells us no, they don’t forget,” Gilchrist said.

Kathy Goodman, mother of the late SSgt. Stephen Goodman, of Mooresville, agreed. “It’s shown me that people haven’t forgotten what our children did to keep them free and safe,” she said.

Jenna Henderson, whose husband Christopher was killed in Afghanistan on Father’s Day 2007, attended the event with their daughter, Kayley.

Henderson said that the events are a chance to meet others who’ve lost loved ones — and not only to share the sad memories, but the positive ones as well.

Christopher would have loved the ride in Spencer, Henderson said.

“He loved motorcycles, there wasn’t a time he didn’t have a motorcycle,” she said, with a smile.

Badgley said those memories keep the fallen soldiers alive. “My son will never die, not with people like this around me,” Badgley said.

When the time for the Flame of Freedom ceremony arrived, about 50 people gathered in a circle — Gold Star family members, Rolling Thunder riders and members of the community.

As the flame was brought out, one Rolling Thunder rider read a description of that light:

“It lights the way home for your brothers and sisters in arms. It crosses this great country to tell everyone: The soldier stands with pride and honor to keep us free, and we keep the light burning to show the way home.”